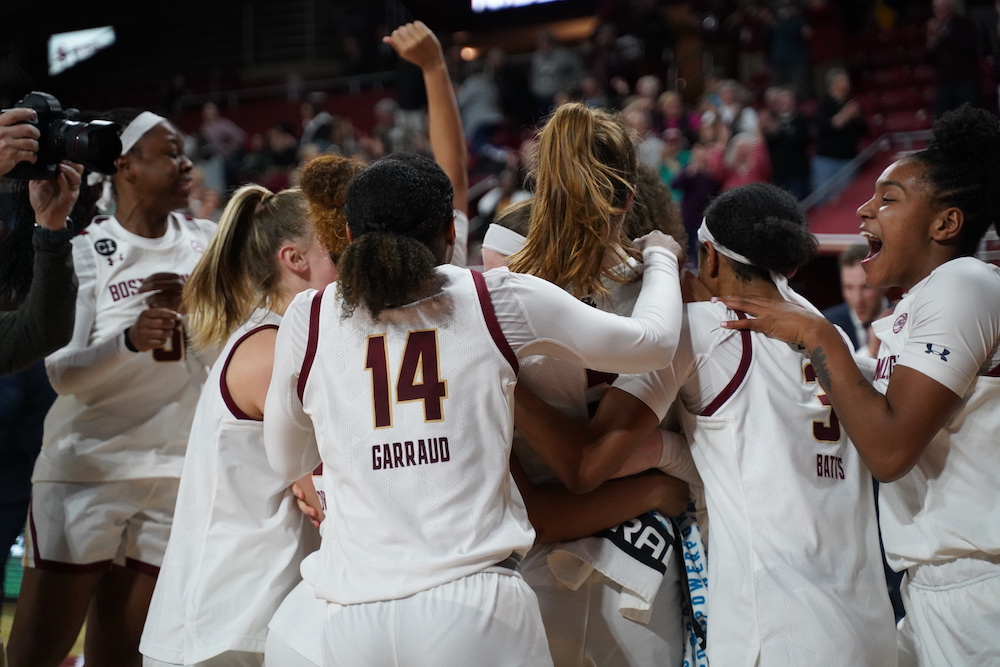 Boston College women’s basketball isn’t necessarily the first team that comes to mind when thinking of the top women’s hoops programs in the country. It’s UConn, Oregon, Baylor, NC State, Stanford, and Louisville that tend to take the cake.

Time after time their names make the headlines, but after just her second year on the Heights, head coach Joanna Bernabei-McNamee has begun making waves with a new-look Eagles team.

But Bernabei-McNamee, this year’s ACC Coach of the Year, said her goal has never been to only build champions on the court: She wants her team’s success to come from the strength of its character, not just its ability to win games.

And according to her, the character on the team was in no short supply for the 2019-20 season, which featured the best Eagles’ team in the last decade.

“Of the 350 Division I women’s basketball teams, if they had a scale of who had the best character, we would probably be number one,” Bernabei-McNamee said over the phone on Friday. “We would be winning the national championship on the character front.”

The Eagles were en route to their first NCAA tournament appearance since 2006 after breaking the program record for ACC wins and putting together a winning season for the first time since the 2010-11 season. But the cancellation of the NCAA Tournament due to the coronavirus put an end to the Eagles’ Cinderella season for good.

There are no numbers through which to evaluate the team’s character, but there were plenty of moments throughout this record-breaking season that exemplified the integrity of Bernabei-McNamee’s team.

Before BC took on then-No. 14 Florida State on Jan. 30, the Seminoles had lost just three games. BC, on the other hand, hadn’t beaten FSU since 2010 and hadn’t knocked off a ranked team since 2015. The Eagles sat at a middle-of-the-road 10-9 record, and the numbers were all stacked against them.

Despite the odds, the Eagles clicked and were firing on all cylinders, leading to a nine-point upset win in Tallahassee.

The Eagles’ character and drive was tangible all game long—FSU led for just four minutes of the entire contest—as well as in the locker rooms after. When Bernabei-McNamee entered the locker room, she was ambushed by water bottles popped like champagne as the players grinned from ear to ear and celebrated each and every person in the locker room. The team members’ excitement was palpable, as if they had worked their entire lives for that moment.

‘Til the Game Clock Sings

What’s more indicative of a never-give-up attitude than a last-second, come-from-behind buzzer beater over a fierce rival?

After being down by double digits at halftime, BC clawed its way back slowly and surely to beat Notre Dame for the second time this season, earning its first-ever season sweep of the Irish. Emma Guy’s last-second layup sealed the deal, but it was once again the Eagles’ character that gave them the win, according to Bernabei-McNamee.

“I think they really had confidence and they believed in each other,” Bernabei-McNamee said over the phone about the game against Notre Dame. “And you know, once the team starts to get that self-confidence and that belief in one another, that momentum that they carry with them is really hard to stop”

It’s All About Confidence

BC entered the ACC Tournament with a first-round bye to take on Clemson in the quarterfinals. But, as Bernabei-McNamee described it, that put Clemson at an advantage. The Tigers had already won one game on that court, so they had the confidence entering the matchup with BC. But even with the back-and-forth nature of the game, Bernabei-McNamee relied on the players themselves, not their physical abilities.

“There wasn’t really a doubt in my mind that we were going to win that game because of the way they were playing with each other,” she said. “Even in our timeouts, you could tell that they were very engaged, very focused, and you could tell they were determined not to lose.”

BC earned another comeback victory in the next round against No. 3 seed Duke to earn the looks of bracketologists, and it looked as though the Eagles were a shoo-in for the NCAA Tournament before its cancellation.

Though the Eagles head home for good with their postseason cut short, this year’s campaign was not a lost season. The Eagles showed tremendous growth in character, and Bernabei-McNamee said she has high hopes for the future of the team.

“As soon as we get our skill level and our chemistry to catch up to our character, we’re going to be really, really good,” she said. “And at the end of the day, the character is what matters most.”