Boston College has officially announced its new engineering program, which will launch in the fall of 2021 with the Class of 2025. The major, titled the Human-Centered Engineering program, is designed to integrate BC’s liberal arts education with engineering to “address critical human needs,” the University said in its announcement.

Vice Provost for Research and Academic Planning Tom Chiles confirmed the formation of an engineering program last May at an information session for the Schiller Institute for Integrated Science and Society, the creation of which Chiles oversees. Chiles told The Heights last May that the engineering program would comprise a new department in the Morrissey College of Arts and Sciences, though the University did not reference the establishment of an engineering department in the announcement.

The program will be “aligned closely” with the Schiller Institute, which will host undergraduate engineering and teaching laboratories once construction of the building is complete. In the initial April 2017 announcement of the institute, Chiles said that he was exploring engineering but the University did not specify any plans for a program at the time.

Completion of the degree will require 120 credits—the standard for a bachelor’s degree in MCAS—with 80 in engineering, math, and science, and the remaining 40 credits in the liberal arts and humanities.

BC has heavily emphasized the program’s ties to the social sciences, with the major designed for students to “develop an understanding of the intersection of technology and society.”

“Anchored by a human-centered, inclusive approach and design-thinking methodologies, engineering study at Boston College will be bolstered by a global viewpoint, ethical underpinnings, and distinctive capstone projects that address real-world challenges,” the University’s announcement said.

Featured Image of the Office of University Communications 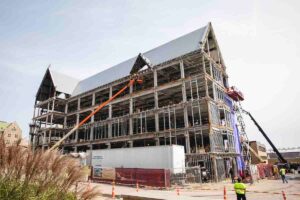