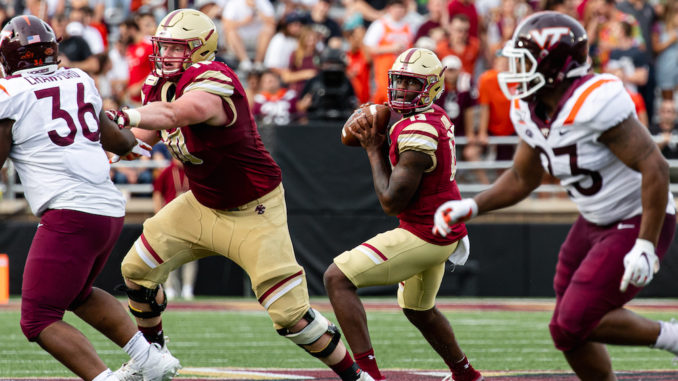 Boston College football offensive lineman John Phillips was deep into his preparation for the NFL Draft when he got the call: The coronavirus outbreak meant that there would be no pro day for him to prove his worth to scouts. Immediately, he and his agent, Cliff Brady of Capital Sports Advisors, began devising a plan for how Phillips would get his name out there.

BC’s annual pro day, originally scheduled for March 18, would have been a chance for Phillips to get recognized in advance of the NFL Draft, scheduled for April 23 to 25. But without it, he had to get a little creative.

Right away, Phillips and Brady began putting together a faux pro day in place of the real thing to send out to scouts.

“That was something my agent thought was gonna be smart to do, and it turns out it’s what a lot of people around the country were doing,” Phillips said in a video press conference on Friday.

Though it was a huge blow to Phillips to lose the in-person pro day, it wasn’t the right guard’s only chance to make a name for himself. At the conclusion of the 2019 season, Phillips was invited to the East-West Shrine Bowl for a senior game in Tampa, Fla. There, he got the chance to send a message to scouts and even speak face-to-face with some.

“I had a couple meetings with teams, and … some of them asked me to draw up plays and stuff like that,” Phillips said. “That was something I was able to show to them that BC got me really ready for. And during that, I was able to show them my knowledge of football.”

And as much of a physical game as football is, it’s just as much of a mental game. Phillips partially attributed the first-round selection of his former teammate Chris Lindstrom in last year’s draft to how Lindstrom impressed scouts with his knowledge.

As an added bonus, Phillips was on many of the tapes scouts watched in advance of last year’s draft, as he started 20 games alongside Lindstrom. Phillips said he hopes that scouts watching that tape would have taken notice even before he declared for the draft, and that the same effect would happen for players to come after him.

Playing down in the trenches of the offensive line takes a certain mental and physical capability unmatched by other positions on the field. Phillips said he believes it’s his ability to combine those two aspects that will take him to the next level.

“I’m a tough, consistent player who knows what he’s doing,” Phillips said. “I’ve never tried to say I was a freak athlete, but I get my job done on a very consistent basis. And I know the game of football, and I’m eager to learn more things.”

Phillips has also had to start getting creative to keep his physical ability up. Luckily for him, his former high school in upstate New York allowed him to borrow a lot of the equipment he needs to keep in top shape. With a full squat rack set up at home and the weights from his high school, he can do everything he needs to, as he put it, “from the comfort of [his] own garage.”

While many of his former teammates are doing what Phillips describes as “barn workouts” by lifting any random object they can find that’s heavy enough, Phillips is well set up to stay in tip-top shape ahead of the draft. In addition to lifting, Phillips has been working on his pass sets and as many offensive line drills as possible in his backyard and at nearby parks.

As Draft Day approaches, Phillips is doing all he can to get noticed and stay in shape. All that’s left to do is sit by the phone and wait to hear his name called.