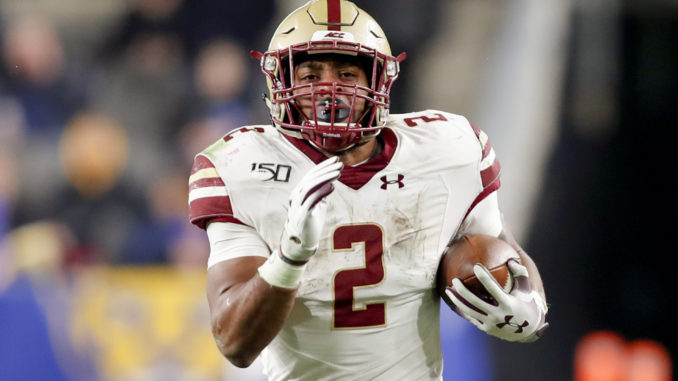 After years of hard work, running back AJ Dillon of Boston College football has earned his big break. Though the selection process wasn’t in the format he would’ve expected at the beginning of the year due to changes as a result of COVID-19, Dillon nonetheless had the coveted chance to hear his name called by NFL commissioner Roger Goodell 2020 NFL Draft on Friday night.

Dillon, projected by many top NFL news sources to go no higher than the fourth round, was selected at No. 62 overall in the second round by the Green Bay Packers.

Dillon’s selection at No. 62 is the highest selection of a BC running back since William Green was taken No. 16 overall by the Cleveland Browns. In fact, he’s only the third BC running back to be selected in this century, with Green and Andre Williams as the only other two at his position.

Dillon wowed scouts at the NFL Combine earlier this year, putting the highest vertical jump, the farthest broad jump, the fifth-most reps on the bench press, and the 10th-best 40-yard dash time of all running backs this year. And, on top of it all, he was the heaviest player at his position, clocking in at 247 pounds.

Though Dillon wasn’t projected to go as high as he did in the draft, he said in a press conference a few weeks prior that he knew he had done all he could to get his name out there.

“I feel more confident in the fact that other people know what I can do, not just the BC community, myself, and my family,” Dillon said in that press conference. “I had no doubt in my mind that I was gonna go to the combine and put up the numbers the way that I did. But I feel like it came as a shock to a lot of other people.”

Out of high school, Dillon originally committed to play at the University of Michigan before decommitting and deciding on BC. As a four-star recruit, he also entertained offers from the likes of UConn, Florida State, Illinois, Notre Dame, Wisconsin, Virginia Tech, Syracuse, and Iowa, to name a few.

After three years on the Heights, Dillon decided to forgo his senior season in favor of declaring for this year’s NFL Draft.

“At this point in my career, I’ve done everything I set out to do,” Dillon told Yahoo! Sports writer Pete Thamel after entering the draft. “I had a chance after the Pitt game to talk with my family. We came to the conclusion: It’s time to take the next step.”

With his selection, Dillon became the first Eagle selected by Green Bay since B.J. Raji went to the Packers at No. 9 overall in 2009.