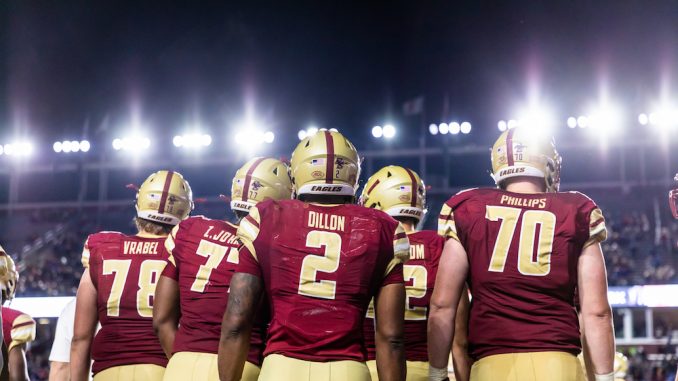 It has become commonplace among the Boston College football recruiting and coaching staff to tweet GIFs of Eagles accompanied by head coach Jeff Hafley’s signature phrase “get in” every time a new player commits to BC. As of Wednesday, Joe Sullivan, BC’s director of player personnel, had tweeted four different eagle GIFs, each denoting a commitment in the class of 2021.

Of those four, two commitments have been confirmed: Lewis Bond and Dante Reynolds. Bond and Reynolds are the first two offensive skill position players to have committed under Hafley, and it won’t take long for them to get used to playing together, as they joined forces on the high school field as well.

Bond, a running back, and Reynolds, a wide receiver, both join BC from Kenwood Academy near Chicago. They have each earned three-star ratings and entertained offers from many other Division I schools.

Reynolds caught 15 passes for 313 yards and five touchdowns his junior season, averaging nearly 21 yards per reception. He also had 14 carries on the ground for 86 yards and two touchdowns. His standout status in high school earned him a No. 225 ranking out of all wide receivers in his class in the country, and he chose BC over offers from Bowling Green, Maryland, Nebraska, Ole Miss, Tennessee, and Syracuse.

Bond rushed for 681 yards and seven touchdowns on 63 carries last season. He turned down offers from Maryland, Syracuse, Tennessee, Vanderbilt, Memphis, Dartmouth, Princeton, and Harvard in favor of BC.