Home » Shame Comes from the Archbishop 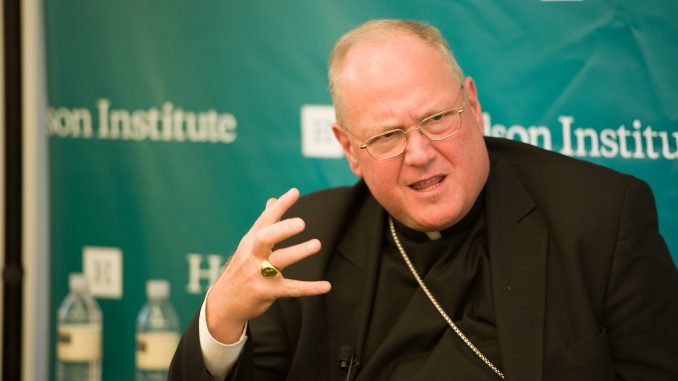 Shame Comes from the Archbishop

Every Friday for the past month, my father has driven down to Manhattan and delivered food with Catholic Charities to homebound senior citizens. When I first found out he was doing this, I was alarmed. As a 62-year-old cancer survivor, he’s not the best person to go in public during the coronavirus outbreak, let alone in the city that has the most cases and deaths.

“But it’s what our faith tells us,” he said. And I couldn’t really argue with that.

Indeed, Catholic social teaching not only encourages but compels us to stand with the marginalized, the poorest, the most vulnerable, because, as Christ said, “as you did it to one of the least of my brethren, you did it to me.”

Many of the seniors he delivers to are too afraid to even open the door. They thank him from the inside of their apartments, grateful that their next meals have arrived, even if they don’t get to see from where. And on his way up and down six-story walk-ups with trays of food, the grace of God finds my dad and keeps him returning, week after week.

There are thousands of selfless New Yorkers just like my dad, who’ve stepped up to help their brethren without being asked. So it was all the more unsettling to watch the shepherd of New York’s flock appear on Fox & Friends to lick the boots of the man who, in the wake of 65,000 dead Americans, repeatedly brags about his TV ratings.

New York Archbishop Cardinal Timothy Dolan joined Ainsley, Brian, and the rest of the gang Monday morning to proclaim his “admiration” for President Donald J. Trump’s leadership. Dolan smiled with glee, saying he was honored to be one of the friends on Trump’s go-to morning show, even if he couldn’t join them in person.

One day prior, Trump joined Dolan virtually to watch Mass at St. Patrick’s Cathedral on Fifth Avenue, the same street Trump bragged he could stand on and shoot someone without losing any supporters. Though he faced some criticism for it, the archbishop was not wrong for extending a hand to Trump and inviting him to join for virtual worship.

He was wrong—and gravely so—for kissing the ring on the morning show that has become notorious for capturing Trump’s ear. It was a demonstration of shameless sycophancy that set a horrible example for Catholics everywhere.

This isn’t to suggest that Catholics, like many other people, don’t need help. As the Cardinal said, families are struggling to make tuition payments to their fiscally humble parochial schools, there’s been a reduction in donations to charities that aid in times of crisis, and it’s become increasingly difficult for many Catholics to find God amid all of the grim headlines.

But the church has weathered times far more pressing than these—from plagues to schisms to persecution—and it has done so without receiving a stimulus check or creating a GoFundMe or insisting that the emperor has clothes on, as Dolan did Monday.

In genuflecting before the altar of Fox & Friends, Dolan modeled for Catholics across the country the sort of blind-eye-turning that evangelicals who support Trump have come to exemplify. And in lauding Trump’s sensitivity to the needs of the religious community, Dolan invited his flock to do so too.

To be fair, Dolan isn’t exactly a titan of intellect—it’s not like he’s had any Jesuit schooling—but goodness, how foolish do you have to be to believe the man who tweeted out “HAPPY GOOD FRIDAY TO ALL!” is going to have a solution for the Roman Catholic Church?

Even more shameful was the cardinal’s appearance with Rev. Matt Malone S.J., editor-in-chief of America magazine, on a Facebook Live Friday afternoon. The cardinal said that the left wing was “snotty” for critiquing his phone call with the president and other Catholic education leaders. “Are we not sacred in accompaniment and engagement and dialogue?” he asked. Dolan suggested that by building bridges, he would be able to give critiques in the future in hopes of influencing a change in policy.

But the cardinal has had the president’s ear regarding immigration for some time, and there are still thousands of children of God locked in the American government’s cages. He’s had Governor Andrew Cuomo’s ear too, and it’s still legal to abort a baby in the third trimester in the state of New York.

At best, this demonstrates a profound naivete about the relationship between secular and theological powers under American liberalism. At worst, it’s a bad-faith attempt to skirt criticisms with a chuckle about donations.

Cardinal Dolan is certainly not the first bishop to cozy up to a morally questionable leader in a time of crisis. And everyone, including Trump, is a child of God, deserving of mercy and love. But there’s so much more Cardinal Dolan could have done with those 10 minutes on the president’s favorite morning show.

He could have celebrated friars like Rev. Hugh Vincent Dyer, who sealed himself inside a nursing home, determined to administer God’s grace to those most vulnerable to the virus.

He could have encouraged Catholics to call their churches and ask if the priest would do a drive-by confession, as so many have already started doing.

He could have welcomed the thousands of Catholic high school students with extra free time at home to help Catholic Charities feed starving New Yorkers.

But instead, in his appearance on Fox & Friends, Cardinal Dolan turned away from Jerusalem and toward Rome, groveling to a leader who is one-tenth of the man my father is.