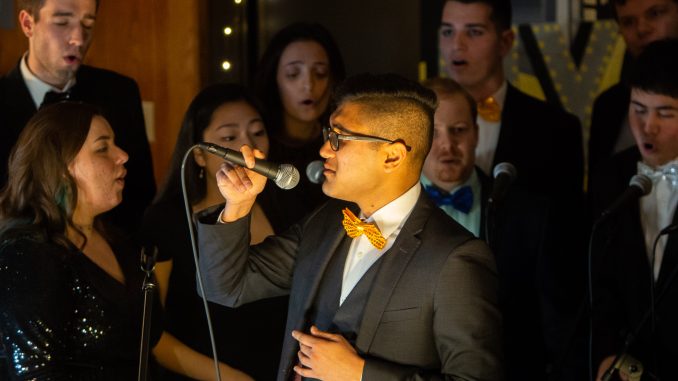 The evening of March 11 was supposed to be a regular rehearsal for the Common Tones. But when, on that same day, Boston College announced that students had just four days to leave campus, the meeting took on a very different atmosphere.

“Everyone was very upset,” said Brianne Lee, Lynch ’22, a member, as well as publicity director, of the group. “And so everyone still came to rehearsal, but it wasn’t rehearsal, because we didn’t have anything to rehearse anymore. And we just sat around and we just cried for a bit.”

All across campus, other a cappella groups reacted similarly to the news. Many staged impromptu performances to honor their senior members, who would no longer get the chance to close out the year with a final show.

The Heightsmen, in lieu of their annual Spring Cafe, organized a performance outside Lower dining hall, complete with microphones and speakers.

“It was definitely really rushed, but we actually ended up getting a cafe out of it. Honestly, we’re so thankful for that,” said Heightsmen President Colin Guan, MCAS ’21.

The Bostonians, Dynamics, and Acoustics also held last-minute shows in the wake of the announcement, and members of BEATS got together for a potluck-style meal to say goodbye.

The shift to online classes has meant that many events that a cappella groups had been gearing up for will no longer happen. Spring cafes, which are often held in April, went unrealized, along with final performances for senior members. To celebrate their 30th anniversary, the Heightsmen were organizing a special show for alumni members. And this semester, the Dynamics were planning on recording the third part of No Lows, their album.

Arts Fest, a yearly staple at which many groups perform, took place on schedule, albeit virtually. The Arts Council posted a steady stream of photos and videos highlighting the BC arts scene on its social media accounts and website from April 23 through April 25. Some groups, like the Acoustics, Dynamics, Sharps, and Heightsmen, contributed videos of past performances. The Common Tones and the Bostonians submitted songs that they recorded after students had returned home.

After seeing a Zoom performance by the Melodores, an a cappella group from Vanderbilt University, the Bostonians were inspired to try their hand at putting together their own video. The group chose “Friends” by Francis and the Lights, a familiar piece that holds extra meaning during quarantine according to Robert Sangirardi, Bostonians President and CSOM ’20.

“It’s kind of a sentimental song to us,” said Sangirardi.

“Like, we’re all friends, right? It sounds cliche, but in reality we were just like, ‘Yeah, this is pretty fitting that we’re kind of taking the time to do this. And it’s pretty meaningful to us.”

Each member recorded his or her own part of the song. To help themselves stay in key, the members played a past recording of the song in one ear. Creel Cashin, MCAS ’21, soloed.

To pay homage to their seniors, the Common Tones posted a series of five videos on their Instagram page. Each song is soloed by a different senior. Instead of giving speeches to the seniors in person during the group’s spring cafe, members left messages in the captions of the videos.

Aside from the milestones they can no longer forward to, a cappella members say that they miss being together with their groups.

“Rehearsals are rehearsals, and we do get a lot done, but it was also kind of a hangout space that we could be in for an hour and a half to two hours, like three times each week, just to be forced to take a break from homework or anything else going on in our lives,” Lee said.

Groups have kept in contact through text and video calls. Some have taken the opportunity to form closer bonds with alumni members.

“For the past three or four weeks, alumni from the very first few years have started to organize Zoom calls where any and all Heightsmen are welcome to join,” said Guan.  “And we’re all on a big listserv on Gmail, so we can sort of talk amongst ourselves, talk amongst the alumni, and I’ve gotten to meet so many cool people that have been Heightsmen in their college days, but now have sons and daughters and now are heading businesses.”

The Acoustics recently held a Zoom session with over 200 alumni members, according to Tyler Allen, MCAS ’22, while the Bostonians have been organizing video calls for both alumni and current members.

Practicing at home presents its own challenges. Since Zoom rehearsals can be unwieldy, groups have encouraged members to practice songs on their own instead, or are holding off until fall semester.

“For the most part, people have just really been taking some time to themselves,” said BEATS Vice President-elect Milton Lanza, Lynch ’22. “And now it’s also, like, a lot of people have things that are going on in their own lives. So we’re trying to be super understanding about that.”

The Dynamics are continuing to practice individually using a sheet music program called MuseScore, which plays the other vocal parts of the arrangement. While it’s not the same as having the group there, said Christina Solitro, Lynch ’22, the program has been helpful.

The Common Tones are also continuing to practice pieces on their own. When Lee sings at home, she said she misses the feeling of being in a group and struggles to stay motivated to practice.

“You don’t get the a cappella group feel when you lose the other members,” Lee said. “Because a lot of rehearsal is, yeah, learning your own part, but also learning to listen to the other people in your part, and to kind of match what they’re doing—and then on top of that, listen to everyone else.”

The Student Strikes of 1970
Support ‘The Heights’ on #GivingTuesdayNow