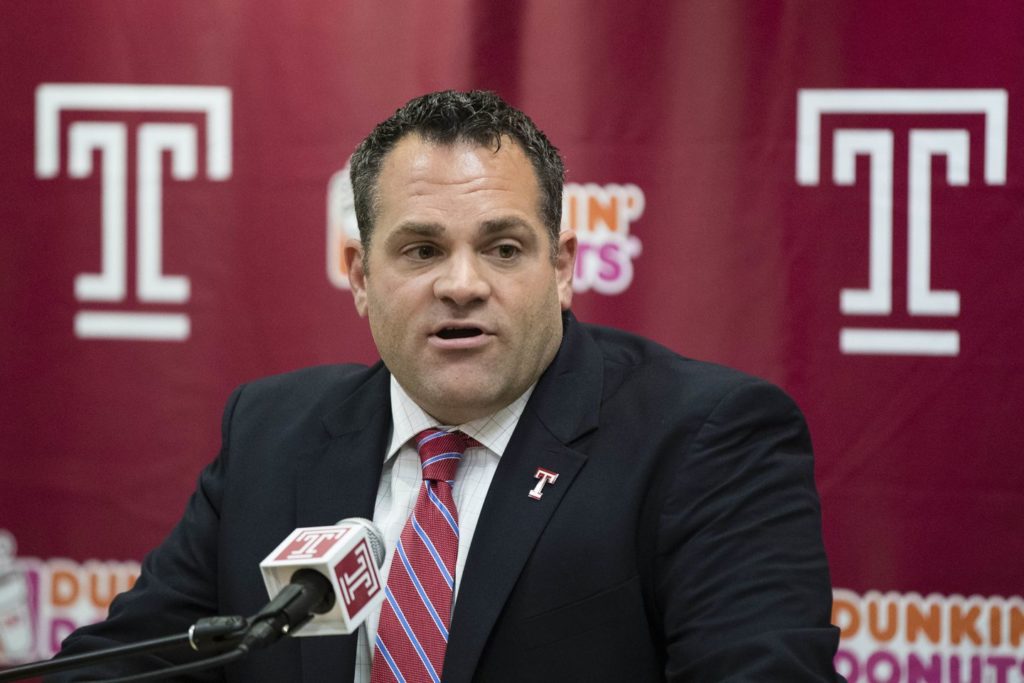 Kraft’s Philosophy for BC Athletics Centered around Athletes, Values, Family

In the minutes leading up to newly minted William V. Campbell Director of Athletics Patrick Kraft’s introductory press conference on Monday, members of the press began to file in one by one, as they would at any other press conference on campus. But instead of taking their seats on the third floor of the Yawkey Athletics Center, the media members tuned in remotely from their homes and offices all over the country.

Kraft sat poised in front of a red wall in a Boston College lapel pin and tie, hinting at a sense of normalcy in such an unusual press conference, and despite the lack of a podium, the enthusiasm in his voice was palpable.

BC announced on Wednesday that the former Temple athletic director would take over the position vacated by Martin Jarmond after just two weeks of searching. For Kraft, accepting the job was an easy decision.

“Boston College has been the job for me,” Kraft said. “It’s so rare when you have your personal beliefs, faith, and family coincide with your professional life. This [job] was always the important one for me: Jesuit foundation, big time college football in the ACC. … This was really a dream job for me.”

Kraft, who was raised Catholic and self-identifies as aligning his life with Jesuit values, said he is familiar with the ideals of BC, which helps to drive his passion for the University. His alignment with BC’s mission was one of the main factors in his hiring, according to University President Rev. William P. Leahy, S.J.

“We wanted an individual who understood who we were, and Pat Kraft certainly values expressions of academic excellence, believes in religious commitment, and also says that athletics is important to the life of a university,” said Leahy during the video press conference on Monday.

“These Jesuit values have guided my own transformation into a better son, a better brother, a better husband, a better father, and a better leader,” said Kraft.

Throughout the press conference, Kraft rattled off reasons why BC is the perfect job for him and, perhaps more importantly, why he is the perfect choice for the job. Among his reasons came faith, passion, family, and a love for molding the minds and athletic abilities of his student athletes.

“I never forget—never—why I do what I do,” he said in his opening remarks. “Simply put: the student-athletes. Period. They are at the center of every single decision I make. I always will ask, ‘Will this benefit the student athletes? Will this help them in life and everything that comes their way?’”

In the tumultuous world in which students find themselves today, Kraft said it is becoming ever more important to help students elevate their voices and educate them on how to have tough conversations. In light of the recent protests circulating the country and the world, Kraft noted his commitment to fostering students’ ability to speak out against injustice.

“There is no better place to deal with these types of conversations than an institution that values social justice and is at the core of Jesuit beliefs and values,” Kraft said in response to his role in furthering social justice campaigns. “What I have told my athletes and continue to talk to them about is empowering them, listening to them, helping them have the tools in their toolbox to be successful.”

In addition to his commitment to his student-athletes, Kraft repeatedly circled back to the importance of family, both in terms of his commitment to his wife Betsy and children Joseph and Annabelle—who, according to Kraft, are “more excited to meet Baldwin than anyone else on campus”—and his dedication to the BC family as a whole.

Kraft noted that his plan to build a stronger BC family begins with the students and young alumni, who he hopes to engage by listening and responding to their demands. Kraft also addressed his commitment to making BC a more legitimate presence in the Boston community as a whole and to help fans around the country understand BC’s place in the ACC.

“BC Nation, I promise you this: We will continue to graduate young men and women who will go on to change the world,” Kraft said in his opening remarks. “We will maintain our success in the classroom. We will give back to the greater Boston community. We will outwork every program in the country, and it will start with me. … We will be champions, and we will not allow excuses to get in our way.”

Emma is the head sports editor for The Heights. She is a diehard fan of the Cleveland Browns, firmly believes that vanilla is the best flavor of soft serve, and argues that all disagreements can be settled with a game of flag football. You can follow her on Twitter for sports updates @_EmmaHealy_.