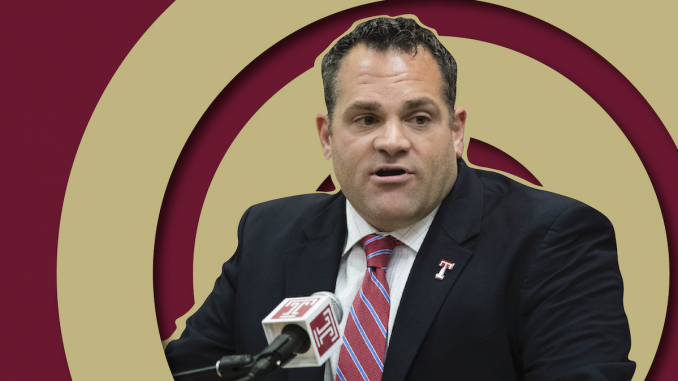 Since joining the Atlantic Coast Conference in 2005, many people have wondered why Boston College is in a Power Five conference in the first place, particularly in regard to football. As a school on the smaller side (as compared to the likes of Clemson, Florida State, or North Carolina), and one that often puts a greater emphasis on academics than it does athletics, BC is somewhat of an outlier in ACC sports.

But with the hiring of William V. Campbell Director of Athletics Pat Kraft, changes could be afoot. In his introductory press conference over Zoom on Monday, Kraft noted his intentions for BC to compete on a much larger stage and force others around the country to see BC as a legitimate member of the country’s premier athletic conference.

“To me, Boston College is the paradigm of college athletics,” Kraft said in Monday’s press conference. “Tremendously smart and dedicated student-athletes, a group of coaches with incredible dedication and passion for their student-athletes, a commitment to excellence and championships with an incredible history, and perhaps most importantly, the department stands on a bedrock of principles and Jesuit values.”

But despite its reputation as a top-tier academic school, Kraft said BC doesn’t get the athletic reputation it deserves. And though BC football has hovered around the center of the conference rankings for the past few years, teams such as women’s basketball, sailing, field hockey, and lacrosse have all been forces to be reckoned within the conference and on the national stage in years past.

Even so, BC is a smaller school than many of its competitors and, according to Kraft, has a smaller athletics budget. As such, Kraft noted it will take more creativity to give BC a legitimate presence in the ACC in the years to come.

“There is no barrier for us,” Kraft said about building a stronger national presence. “I don’t allow excuses about money and finances. That’s not it. I’ve never been in a place where we open up the gates and there’s a ton of money. It’s about using creativity and resources. … We have the foundation—it’s about how we use it.”

Part of his creative plan includes building a stronger alumni investment in BC sports. He emphasized beginning with the young alumni, particularly those in the Boston area who are already invested in Title Town sports. But even with his grandiose plans, Kraft admitted that change won’t happen overnight.

“There is no magic bullet,” he said. “It’s not like all of a sudden you’ve got to flip the switch, but what you do is you engage your alumni first.”

From there, Kraft said he plans to continue the fundraising efforts that Martin Jarmond, who previously held his position, put in place. Kraft noted that, particularly with a smaller budget than competitor schools, fundraising is of the utmost importance.

Coming from Temple, another smaller, often under-the-radar Division I school, Kraft is familiar with the effort it takes to build championship teams and earn recognition in collegiate athletics.

“You’ve got to play to your assets,” Kraft said about attracting top recruits and national attention to BC. “You have to outwork people. You have to have a vision and a plan to succeed. … You’ve got to go out and recruit nationally.”

Though the possibility of collegiate athletics in the fall remains up in the air, Kraft noted that he is optimistic about their return, although the question of whether there will be fans in attendance is still up in the air.

“I can tell you this, I’m very confident about football in the fall,” Kraft said. “I’m on the Football Oversight Committee, and if you were to ask me that question 12 or 15 weeks ago, I would have been a little less confident.”

Even in his first week with the Eagles, Kraft said he is optimistic about the future of BC Athletics. But as he emphasized during Monday’s press conference, improvement won’t happen overnight.

“If you bring people together who are going to work hard for a common goal, a common purpose, it’s amazing what happens,” Kraft said. “And it’s amazing, when you focus on that part of it, the success you will have.”