Home » BC Football Players Are The Ones to Watch on Preseason Award Lists
Sports, Football

It’s been a busy few weeks for Boston College football since its players returned to campus. With workouts, team meetings, and film sessions resuming at BC and all around the country, the potential for a season is beginning to take shape. Part of that beginning includes preseason awards, for which many BC players have already made the short list.

Graduate linebacker Max Richardson leads the Eagles in nominations with his name on three preseason award watch lists. The Duluth, Ga. native had a standout senior season in 2019, which landed him as a contender for the Butkus Award, honoring the nation’s best linebackers; the Bednarik Award for the outstanding defensive player; and the Nagurski Trophy for the National Defensive Player of the Year.

Last season, Richardson had the eighth-most solo tackles in the nation with 72, also good for most in the ACC. Richardson was a force to be reckoned with as he led the Eagles with 14.5 tackles for loss and added 3.5 sacks.

Richardson is one of 17 ACC players—the most of any conference—and one of 31 linebackers named to the Nagurski Trophy watch list. He is one of 51 players named to the Butkus Award Watch List, and the only BC player to have ever won the award was Luke Kuechly back in 2011.

Each year, Phil Steele’s Magazine puts out its preseason rankings, and this year, senior offensive lineman Zion Johnson’s name was near the top. Steele named Johnson to the Preseason All-American Second team, but his accolades don’t end there. The Maryland native also found his name on the watch list for the Outland Trophy, which honors the top interior lineman in the FBS.

Last year, he was an All-ACC selection and played 90 percent of the Eagles’ snaps at left guard despite starting just seven games. He was also named ACC Offensive Lineman of the Week three times during the 2019 campaign.

Tight end Hunter Long is the only Eagle on the John Mackey Award Preseason Watch List this year. The award, in honor of the former Syracuse standout and NFL Hall of Famer by the same name, honors the nation’s top collegiate tight end. As voted on by a committee, the recipient of the award is said to exemplify the play, sportsmanship, academics, and community values of Mackey. Long was also named to Steele’s All-ACC team.

Last season, Long led BC with 509 receiving yards on 28 receptions, and he notched two touchdowns through the air.

After the departure of running back standout AJ Dillon to the NFL, BC is in no short supply of talented rushers. Last year, Dillon was a semifinalist for the Doak Walker Award, and this year, junior David Bailey finds himself on the preseason award list for the same honor.

Bailey started just one game last season, but he appeared in all 13, notching 844 yards on 148 carries. He ran in seven touchdowns, but his scoring doesn’t stop there. The Maryland native caught one touchdown pass and even threw another.

The Doak Walker Award honors the NCAA’s top Division I running back, and it is the only major collegiate award that considers an athlete’s academic standing in its eligibility requirements.

BC is one of 17 schools to have two players named to the Outland Trophy Watch List: Johnson and fellow senior Ben Petrula. Petrula also found his name on Steele’s Preseason All-ACC list.

Petrula started all 13 games with the Eagles last season, allowing just one sack in that time. He was also named to the All-ACC Second Team at offensive tackle in 2019.

Rounding out the list of preseason award nominees, Alec Lindstrom, Brandon Sebastian, Travis Levy, and Tyler Vrabel were all named to Steele’s Preseason All-ACC team. These four players round out the nine BC players honored on Steele’s list this year. 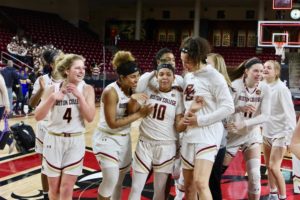 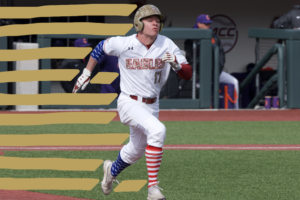