BC Football Will Play Without Spectators in September

Spectators will not be allowed at football games in September, in accordance with guidance from the Commonwealth of Massachusetts, Assistant Athletic Director of Ticket Sales and Services Michael Ricci said at a webinar on Tuesday. The determination of whether attendance will be allowed for the remainder of the season will be made at a later date.

Governor Charlie Baker paused the Commonwealth’s reopening, effective last Tuesday, in an updated gatherings order to slow the spread of COVID-19. The order reduced the maximum number of people allowed in a single outdoor space from 100 to 50 people. Any gatherings where individuals cannot consistently maintain six feet of distance and those that draw large groups of people together, even in unenclosed spaces, will not be allowed.

BC’s first game of the season against Ohio University on Sept. 12 has been canceled after the Mid-American Conference suspended all fall sports. No decision has been made as to whether BC’s September matchup against the Bobcats will be replaced, Ricci said.

The Gold Pass and season tickets will not be offered for the 2020-21 year, but if attendance is allowed at future sporting events, tickets will be sold on an individual basis. Although no decisions have been made yet about allowing spectators for future sporting events, Ricci said, the option to purchase single tickets for individual games would likely be in the spring for winter sports. Single-game ticket prices will vary depending on several factors, including the sport and opponent.

Students who already purchased the Gold Pass will be refunded or have their passes roll over to the next school year. BC’s network supplier is Comcast, which is not offering streaming for the ACC network. BC Athletics is reviewing platform options for students to watch games live, including YouTube, Hulu, PlayStation, DirecTV, Dish, Fubo, Sling, Verizon, and Vidgo, according to Jamie DiLoreto, associate athletics director of marketing and fan engagement.

BC Athletics is also looking into ways to keep game-day traditions alive and instill a sense of support and camaraderie among students, such as miniature bells that students can ring when the team scores a touchdown, DiLoreto said.

“Game day will be different, but it creates an opportunity for us to be very creative,” said DiLoreto. “We would love to hear from students on different ideas [because] the best traditions come from students.”

“[email protected],” a new marketing campaign, will provide content on athletics’ social media platforms and will include promotions and sponsorship opportunities.

Athletics will also be partnering with student organizations such as the Undergraduate Government of Boston College and Campus Activities Board to provide students with a [email protected] experience, DiLoreto said. They will also work with Student Affairs, the Office of Residential Life, and the Alumni Association. 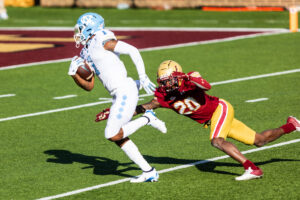