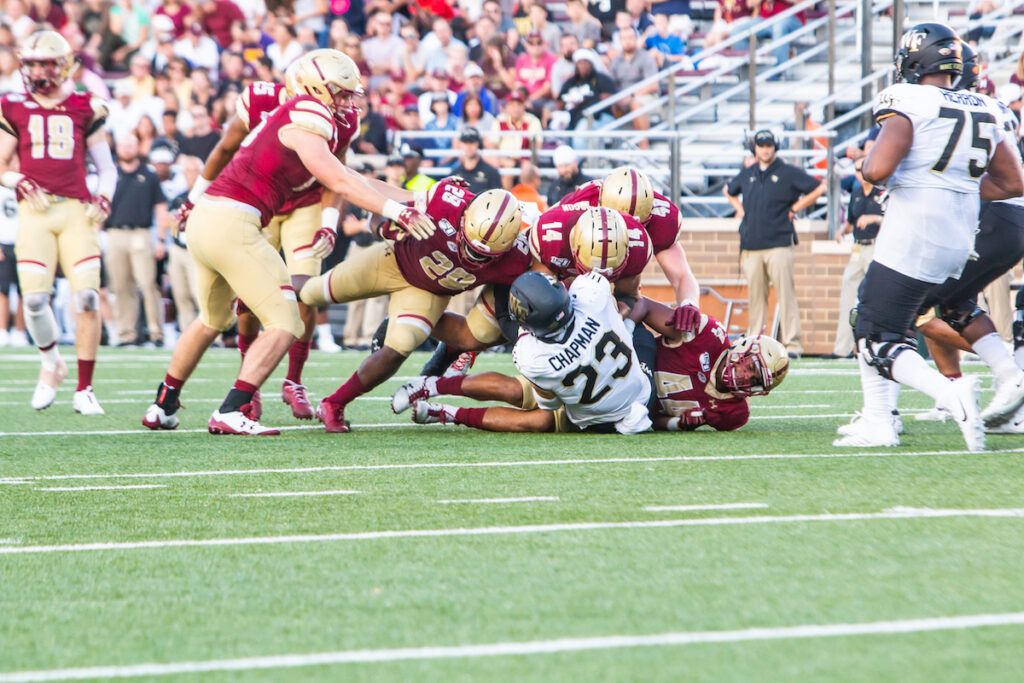 With the first weekend of NCAA football games already past and the ACC set to kick off its season this Saturday, college football is officially underway. While the rest of the ACC plans for Week One, Boston College has an extra week to focus on itself, as the Eagles don’t open their season until a Sept. 19 showdown against Duke.

During a post-practice press conference on Tuesday, head coach Jeff Hafley said the Eagles intend to take full advantage of the bonus time. With an entirely new staff of coaches and an altered practice timeline due to the coronavirus, BC is taking some time to adjust this year.

“We decided we’re not going to start on Duke until a little later, so these next couple practices are going to be about us trying to fine tune some stuff,” Hafley said.

Hafley highlighted tackling as one key area that his team will focus on in the next couple of days—an emphasis that he said is particularly important given the team’s abbreviated offseason program.

“Without spring football and without a true training camp, we just felt like [it] was way more important for us to focus on the little things and take care of ourselves before we take that step forward, which we plan to do this weekend,” he said.

Tackling woes were a consistent theme during the first weekend of games around the country. A number of teams put up staggering offensive performances as a result of defensive missteps, with highlights including Army’s 42-0 blanking of Middle Tennessee, Alabama-Birmingham’s 45-35 shootout victory over Central Arkansas, and BYU’s 55-3 shellacking of Navy.

Although the Eagles’ defense will now have to focus on its takedowns after weeks of thud-only contact, if tackling woes continue around the country, BC running back David Bailey said it will be his time to shine.

“It’s always exciting to get back out there and do the thing I love doing: just pounding and making guys miss,” Bailey said during Tuesday’s press conference. “We expect the teams to be kind of missing tackles like that, but it doesn’t affect us, so we’re going to continue to run hard, make people miss, and break them tackles.”

Hafley also said that his staff is still working to finalize a depth chart. Hafley has yet to announce a starting quarterback as well, with Phil Jurkovec and Dennis Grosel still battling for the job.

Hafley also announced on Tuesday that former UC Berkeley defensive tackle Luc Bequette will join BC as a graduate transfer. Bequette notched 130 tackles, 12.5 tackles for loss, and 10 sacks during his career in Berkeley.

“Coming into the first game, we’re ready for anything,” Bailey said. “We’re ready to open up anything against anybody.”