Home » BC Football 2020: Heights Editors Give Their Predictions 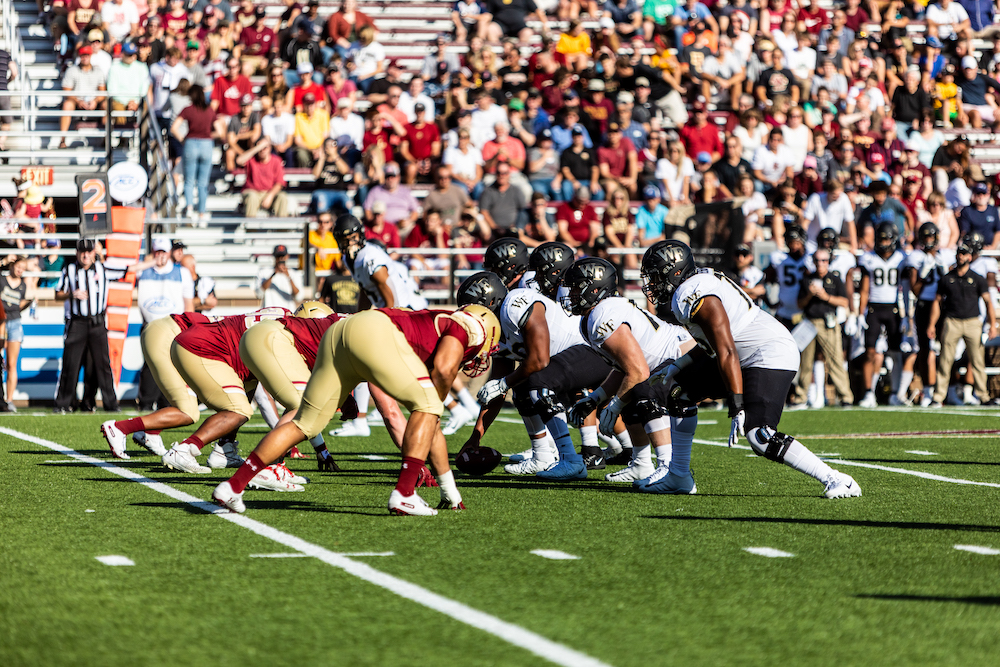 BC Football 2020: Heights Editors Give Their Predictions

Sports editors Emma Healy, Olivia Charbonneau, and Asa Ackerly each answer some of the biggest questions about the upcoming Boston College football season.

Who is BC’s most important player?

Emma Healy: Defense wins championships, so my pick is linebacker and captain Max Richardson. Last year, the All-ACC Second Team selection led the team with 108 tackles in 12 starts, including a team-high 14.5 TFLs. Even so, an inability to stop the run was one of BC’s biggest downfalls last year. Look at the record-breaking 2019 matchup against Clemson, for example, when BC allowed 302 yards on the ground. I expect Hafley and his staff to put a bigger focus on defense, giving Richardson a bigger hand in the season’s outcome. With his final year ahead of him and a captain’s patch on his uniform, Richardson should take on a bigger role this season.

Olivia Charbonneau: David Bailey had a breakout season in 2019 and is set to take on an even bigger role this year. The junior running back was one of only six players to play in each of BC’s 13 contests in 2019, and he showed that he could handle the load. Second to AJ Dillon in most statistical categories, including rushing attempts, yards gained, and touchdowns, Bailey has proven himself as the obvious starter this season. Because he was second to Dillon much of the year, his rushing yards and attempts were much less than Dillon’s. In order for BC to succeed this season, Bailey’s performance needs to grow with him.

Asa Ackerly: It’s hard for me to pick anybody here except Phil Jurkovec. With a commanding offensive line and explosive players in the backfield, BC has the potential to have a very solid offense. Still, none of that will matter without quality play from under center. While Jurkovec has not yet been given the starting nod, it’s hard to imagine him not getting significant playing time. If Jurkovec doesn’t start, that will tell us all we need to know about how the Eagles’ season will go. Jurkovec will have his work cut out for him as a first-year starter learning a brand new offense.

Who is an underrated BC player that will have a big impact?

EH: Marcus Valdez was recently named one of five captains for this year’s Eagles, but even so, I think he’s gone under the radar the last few years. He’s an edge rusher with speed, agility, and strength to spare. His ability to change direction really sets him apart, and he can shed o-linemen with quick bursts of speed. Last year, Pro Football Focus named Valdez the No. 8 returning edge rusher in all of college football. The BC defense showed glimpses of success in getting to the quarterback in the back half of the season—including seven sacks in the last two games—so Valdez has a lot to build on.

OC: To me, Jahmin Muse is the clear choice. Muse has grown as a player throughout his time with the Eagles, becoming a solid defensive back that the Eagles can rely on. If Hafley’s Eagles lean more on defense this season, I can see Muse having a breakout season. Muse’s standout moment this past season was a 36-yard interception that helped the Eagles secure a much-needed win over Pitt in their final regular season game. If he steps up and builds upon his play at the end of last season, Muse is going to be very successful this year.

AA: Luc Bequette will fly under the radar as a result of playing defensive tackle and transferring to BC so late in the offseason, but his presence on the interior could be transformational for the Eagles. Bequette was a dominant force on Cal’s defensive line for the last three years, racking up 126 tackles, 12.5 tackles for loss, and 10 sacks in his time there. Given BC’s struggles on the defensive line last year, Bequette could very well be one of the unsung heroes of the season. Bequette’s late arrival on the Heights could hinder his effectiveness early on, but Hafley said he is optimistic about Bequette’s ability to make an instant impact.

What’s the best-case scenario for the Eagles?

EH: Even though BC is facing unusual opponents, the first half of the season is very winnable. The way I see it, BC could start out 6-0 heading into a Halloween matchup with Clemson. An upset over the 2020 national runners up is unlikely, but one over Notre Dame two weeks later isn’t completely out of the question. If Hafley and defensive coordinator Tem Lukabu can fill last year’s holes in the Eagles’ secondary, and the big men on the LOS click under new leadership, you’re looking at a formidable opponent. Honestly, I can see BC going 8-3 or better if everything lines up.

OC: After the season the Eagles had last year, any winning record is a success. The best case scenario for this team would be defying expectations and becoming a real competitor in the ACC. Solid wins against opponents that the Eagles have struggled against—Louisville, for example—alongside wins in the more evenly matched games would put BC in a great position. But while wins over Clemson, Notre Dame, and UNC would be great for this team, it’s very unlikely for those to come as easily for the Eagles. With all that taken into account, a record of 8-3 would be incredible this year.

AA: I’m pessimistic about the season, but for the sake of argument, let’s make the glass-half-full case. In a true best case scenario, Jurkovec has to be BC’s starting quarterback. Grosel showed nothing last year that leads me to believe the Eagles can pose a serious threat in the ACC. With Jurkovec at the helm, a dominant offensive line protecting him, and offensive coordinator Frank Cignetti employing a more balanced approach, the Eagles’ offense proves to be one of the best in the ACC. On the defensive side of the ball, Hafley and Lukabu’s expertise brings at least a level of middling competence, and the young secondary improves as it gains more experience. If all this happens, I could see the Eagles going as high as 8-3.

What’s the worst-case scenario for the Eagles?

EH: With an entirely new staff, it’s possible that the Eagles will flop all together. Plenty of national polls already have BC at the bottom of the barrel in the ACC. Although I want to believe that’s not true, all the BC hype around Hafley is based largely on feeling, since no one has seen him in a head coaching role before. Worst case scenario, BC’s quarterback struggles from last year resurface, and the young Eagles have a hard time adjusting. On defense, the secondary is still young, and though it improved over last year, that improvement was pretty marginal. If BC falls flat in its early games, followed by a loaded back half, the Eagles could go as low as 4-7.

OC: Under former head coach Steve Addazio, the Eagles struggled against ACC opponents, with his tenure ending with a rough 20-33 record in conference play. For this team to be a success, Hafley needs to show that he can turn that around. If BC is able to repeat last year’s performances against Syracuse and Virginia Tech this year, that’s two wins in the bag, but the rest are more uncertain. But given Texas State’s 3-9 record last year, the Eagles could take an easy win in their single non-conference game of the season. At their absolute worst, the Eagles could go 3-8.

AA: First-year head coaches do not have good track records. After the 2016 season, ESPN writer Bill Connelly analyzed the performance of every team led by a first year head coach, and he found that all 29 squads had underperformed their preseason predictions. That stat does not bode well considering that most national polls—including Bill Connelly’s own ranking system—already have BC ranked near the bottom of the ACC. Let’s say that neither of BC’s potential quarterbacks find their stride all season, the defense fails to improve from last year, and the disrupted offseason hampers Hafley’s ability to install a new playbook. The Eagles will surely beat Texas State and a victory against Syracuse seems likely, but it’s tough to find clear wins beyond that on this tough schedule. A record of 2-9 is on the table.

How do you see the season ending?

EH: It’s hard to tell how an entirely new coaching staff will affect the Eagles, so I’ll focus on what we know for sure. David Bailey is well equipped to fill the shoes of AJ Dillon in the run game, and if the offensive line can live up to its expectations, he’ll have plenty of opportunity. The linebackers, spearheaded by Richardson and Isaiah McDuffie, are abundant with experience, and so is the defensive line. Assuming the Eagles have no trouble with Hafley’s new playbook, they look like a pretty solid squad. A loss to Clemson is pretty much a sure thing, given BC’s history with the Tigers, but the rest of the games are still pretty up in the air. I expect a seven-win season, and although that record is BC’s kryptonite, with this year’s shortened schedule, 7-4 would be a huge improvement.

OC: Even though preseason polls have BC listed as one of the ACC’s bottom feeders—above only Syracuse and Georgia Tech—this team is going to be a dark horse this year. BC has both lost and gained some crucial pieces, but we still don’t know what will happen when the Eagles get on the field. For one, the starting quarterback, alongside the rest of the team’s depth chart, has yet to be released. Realistically, I think the Eagles could steal a winning record if they build momentum early. The game against Duke is still questionable, but a solid win against Texas State could give BC the confidence it needs. With the exception of Clemson and North Carolina as likely losses, BC could put up a solid fight, which leads me to anticipate a 7-4 record this season.

AA: BC is not in a full rebuild as many teams with first-year head coaches are. Quarterback play should improve from last year, either as a product of better talent (Jurkovec) or more experience (Grosel), and it’s hard to see David Bailey struggling too much behind a dominant offensive line. The defense will still struggle, but Hafley’s experience and the new transfers should help. Still, the ACC is brutal right now, and BC’s schedule does the Eagles no favors. Texas State and Syracuse are near certain wins, and Notre Dame, Clemson, and UNC are almost certain losses. The Eagles should have a good shot in the other six, but I’m not ready to call any of them true toss-ups. I’m predicting 4-7 as my best guess for the season.