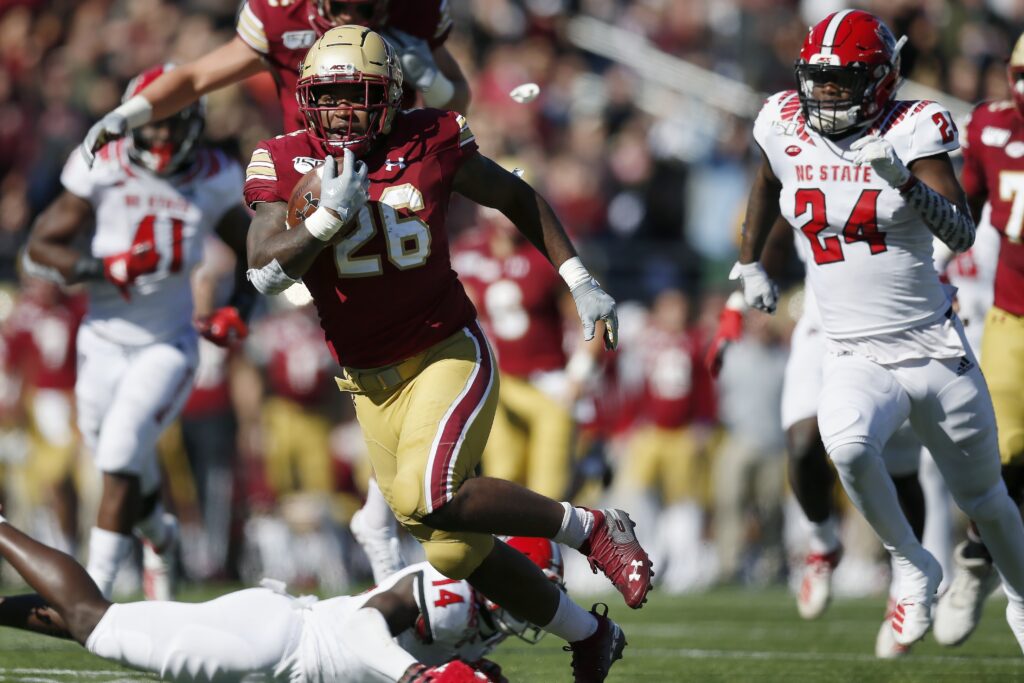 As the clock wound down on the first quarter of the 2019 season, Boston College found itself deep in its own territory on third down and 22. Prospects looked bleak.

Quarterback Anthony Brown collected the snap and flipped it to his running back over the heads of oncoming defensive linemen. Head down, eyes forward, the 6-foot, 240-pound back caught the pass and side stepped his way through a pack of defenders, diving forward across the line to gain for a miraculous first down.

Without seeing it firsthand, it seems like the executor of such a play would’ve been BC’s go-to guy, AJ Dillon. But Dillon spent that play on the bench. Instead, the glory went to the second stringer, David Bailey.

This year, Bailey is no longer the understudy. He’s got fire in his eyes and a whole lot to prove in his junior season.

Even while playing second fiddle to Dillon, Bailey made his way to an All-ACC Honorable Mention selection thanks to some clutch performances off the bench. He started just one game —BC’s crushing loss to Cincinnati in the Birmingham Bowl—but appeared in all 13 en route to 844 yards on the ground.

More importantly, he established himself as a formidable back with the same kind of bruising style that made Dillon so successful. Bailey’s a big man, and his teammates and coaches have described him as “hard to tackle.” With a solid offensive line in front of him—which BC has this year—and a powerful drive behind him, he has the potential for big gains.

“I don’t want to compare him to AJ [Dillon], but he’s big, strong, and he can move for a big guy,” Hafley said about Bailey’s potential at a press conference. “He moves laterally really well. He’s got good feet, good vision, and he can catch the ball out of the backfield. He’s the type of guy who’s going to wear you down—he’s hard to tackle.”

Even though he’s been playing backup to Dillon for a few years now, Bailey said he is always ready for action.

“Every week, I am always ready—it’s the next-man-up mentality,” Bailey said in a post-game interview back in 2018. “Coach called my name today, and I went in and played ball like I always do.”

In that game, saying he “played ball” meant that he ran rampant around the Louisville defense, carrying the ball 28 times for 112 yards and a touchdown as a true freshman. Eighty-seven of those yards came in the second half. It was one of the first displays of Bailey as a ground-and-pound attacker. Since then, he’s only grown.

As a sophomore in 2019, Bailey’s career-high rushing yards ticked up and up, game after game. Last season was highlighted by 172-yard and 181-yard performances against Syracuse and NC State, respectively.

Other than his physical stature, Bailey’s biggest strength is his versatility. As Hafley said, he’s a big guy, but he moves like he’s in zero gravity. His pass catching stands out as well, which is often hard to find in a running back. To top it all off, Bailey’s even got a pretty solid arm—he threw a passing touchdown last season against Wake Forest.

Down by 10 against the Demon Deacons midway through last season, Bailey took the handoff from Brown, rolled out to the right, and tossed a 16-yard floater to a wide-open Chris Garrison in the endzone. Bailey’s pass was the crown jewel in what ended up being a disappointing loss for the Eagles.

BC fans are familiar with a run-first offense, as former BC head coach Steve Addazio’s offensive game plan revolved around the dynamic duo of Dillon and Bailey. It’s hard to say what Hafley’s offense will look like, but it’s a certain bet that Bailey will be a key factor in the Eagles’ ball movement this season.