Home » Eagles, Thompson Look to Make Up For Lost Time 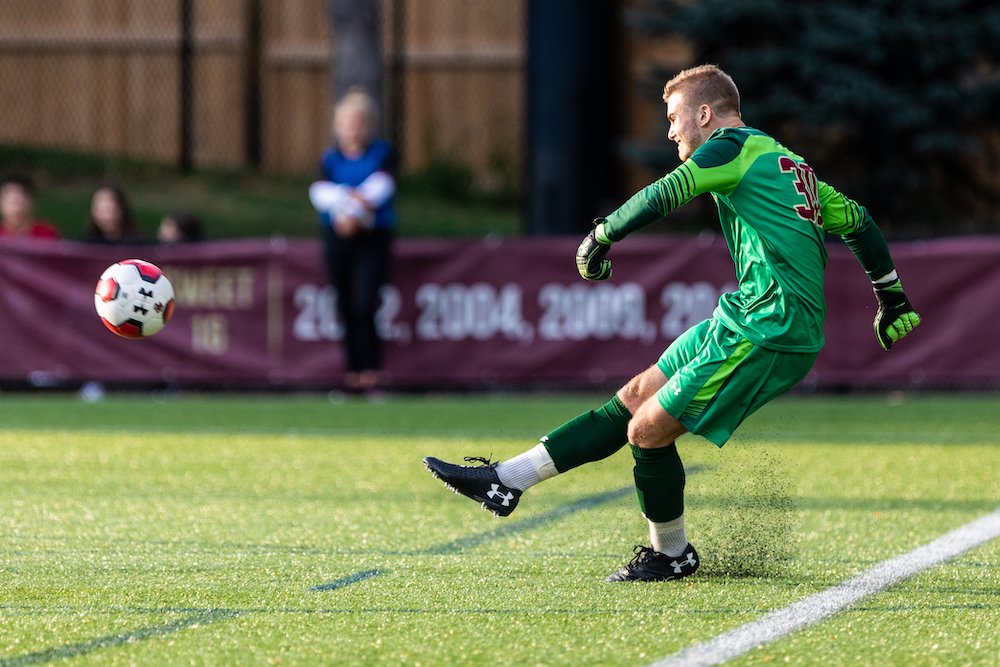 Eagles, Thompson Look to Make Up For Lost Time

While Boston College men’s soccer won’t be competing this fall season, the team is still making the most of the time it has by practicing and getting used to a new head coach.

According to first-year men’s soccer head coach Bob Thompson, the players and staff pondered the question of whether to compete for a long time. Once the players began questioning whether a return to play made sense and brought up their concerns with the staff, the two groups weighed their options and ultimately made the final decision to withdraw from the fall season, despite no other ACC programs canceling their seasons.

“[I was] definitely a little sad at first, but once the logistics came together and we had all the facts presented [to us], it definitely seemed like the best option for us going forward,” junior goalkeeper Christian Garner said. “I think overall everybody was on board with the decision. It was definitely sad in the beginning, but overall looking ahead into the future, it was a smart decision.”

One of the major factors the team considered in its decision was its smaller roster size. Four of the international players are unable to return to campus from their respective countries, and two players are still recovering from surgery, leaving the Eagles six players short heading into a potential fall season.The shortened bench made it nearly impossible to field a team, leading BC to make the decision to not participate in any matches this fall. For the players that returned to campus, the team has been holding full training sessions daily in Conte Forum.

The team announced that it would not be competing this fall via its Twitter account on Sept. 1. The statement cited struggles that would have arisen had the Eagles played matches amid the COVID-19 pandemic, namely the inability of many players—both incoming and returning—to make it to campus this semester.

Garner said that BC Athletics has been active in its efforts to prevent the spread of COVID-19 among athletes. According to Garner, the players receive daily symptom and temperature checks, similar to those found on the BC Check website and done before entering the Margot Connell Recreation Center, before they are allowed into Conte Forum.

The team has been especially diligent about mask-wearing, as Garner said that there isn’t a moment that any of the athletes aren’t found wearing a mask while on the practice field. But despite the restrictions, Garner and his teammates have been enjoying their training session, especially since their spring season was short in March.

“[These training sessions] are more like an offseason because we never really had an offseason, having to miss so much of the spring,” Thompson said. “We’re taking the opportunity to work on details you would work on in the offseason. Without having to prepare for two matches a week, we have been able to cover a lot each week.”

Thompson said that the absence of competition this fall has allowed him and his staff to work on introducing new tactics and developing the team culture. The lack of an offseason for the Eagles had also prevented Thompson from fully engaging with the team in his new position as the head coach, following former head coach Ed Kelly’s decision to retire after the 2019 season. There’s been a lot to cover with the team, Thompson said, and the next two months will allow him the opportunity to work out any kinks in his process.

BC’s return to play in the spring, however, is still up in the air. The Eagles would typically spend their spring playing out-of-conference games following the conclusion of the NCAA Men’s Soccer Tournament in the winter. A spring tournament could give the Eagles an opportunity to play against non-conference teams, but Thompson clarified that there is still no definitive plan for who the NCAA will choose for the spring tournament or how that process will play out.

“If we are playing in the spring, we have an opportunity to qualify,” Thompson said. “Not playing in the fall does not take that away from us. It might make it more challenging, but it is definitely an option.”

And according to Thompson, even though the players wish they were on the field competing like all of the other ACC teams, both the players and staff members are happy to be back on campus training together.