After Boston College football’s dominant win over Duke in its season opener, the Eagles were flying high. But just a week later on their home turf, the Eagles (2-0, 1-0 Atlantic Coast) came back to earth against Texas State (1-3). There’s no sugarcoating the Eagles’ performance—BC struggled on both sides of the ball for nearly the entire game, but a last-minute push and a few costly Texas State penalties gave BC its second win of the season. Still, the Eagles managed to come away with a win with a couple bright spots amid the shaky performance. Here are four takeaways from the game:

Jurkovec is a True Dual-Threat Quarterback

Phil Jurkovec struggled as a passer for most of the game, gaining just 5.5 yards per attempt and repeatedly demonstrating poor decision-making ability by throwing into double or even triple coverage. Still, he demonstrated how his abilities as a runner make him an effective weapon even when the pass game isn’t clicking. Jurkovec was the Eagles’ leading rusher on the night, picking up 37 yards and a pair of touchdowns on the ground. At 6-foot-5, he adeptly uses his long legs to quickly pick up chunks of yards and has an impressive ability to dive forward for extra yards while still avoiding big hits.

Jurkovec’s strength and aggression as a runner also made him particularly effective on the QB sneak, and the Eagles took advantage of it to score two touchdowns. With BC’s running backs and O-line struggling for most of the game, Jurkovec was a great option in short yardage and goal line situations.

Jurkovec came alive through the air in the final few minutes of the game, completing five straight passes to bring the Eagles within scoring range.

The Pass Rush is the Strength of the Defense

While the defense struggled as a whole, the Eagles had no troubles getting after Texas State quarterback Brady McBride, sacking him five times. Isaiah McDuffie showed off his usual explosiveness getting into the backfield, notching a pair of sacks, and starting ends Shitta Sillah and Marcus Valdez were effective off the edge. The biggest news of the night though was the effectiveness of the Eagles depth players on the defensive line. Maximilian Roberts, a graduate transfer from Maine who joined the Eagles this week, made an instant impact with 1.5 sacks and two tackles for loss. He demonstrated an explosive burst coming off the edge, highlighted by this rush where he perfectly reads the snap count and then uses his speed to beat the left tackle.

Robert’s pressure on McBride forces him into the oncoming Brandon Barlow, who brings him down for the sack. Barlow also played well, proving that he can still be an important player for the Eagles even after losing his starting job.

Open Field Tackling is an Issue

The Bobcats only averaged 3.2 yards per carry on 40 attempts for the game, but that average doesn’t reflect the level to which the Eagles struggled to stop the run. The five sacks of McBride and running back Brock Sturges’ inability to get anything going both detract from the Bobcats’ rushing average. Texas State’s other backs had much more success, ripping off chunk play after chunk play. In the first half, these runs usually came on the outside as BC’s defensive ends failed to set the edge and the secondary struggled to make open field tackles.

After giving up outside runs in the first half, Texas State turned to gashing the Eagles down the middle in the second half.

While Jurkovec put on a dazzling display in the Eagles’ opener against Duke, he had a tendency to dither in the pocket for too long before making a decision with the ball. In the opener, the Blue Devils came away with seven sacks, and while some of those can be attributed to BC’s offensive line, Jurkovec did himself no favors with his extended pocket presence. He demonstrated the same issue again against Texas State, hanging in the pocket for far too long at times. Here he stands in the pocket for close to seven seconds before taking a sack, far too much time to expect the offensive line protection to hold up.

Featured Image by Barry Chin Courtesy of the Boston Globe 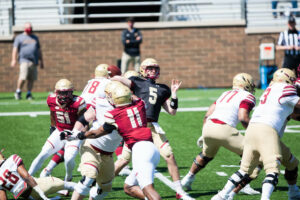