Whenever an artist blows up to the point where their songs have hundreds of millions of plays, it’s so easy to assume that they’ll just play it safe. Joji has reached that enviable stage. Those sad lo-fi R&B jams on Ballads 1 and his EP In Tongues caught the world by storm. Now, Joji has the guarantee that he can just throw together some mediocre lo-fi tracks and call it a day. But his sophomore album Nectar refuses to stoop that low. Joji plays around with genre and different sounds to make Nectar an improvement over his past work.

Joji is known for his mellow and lonely reflections on relationships, but he goes out of his way to prove he’s more than that by the second track on Nectar. “MODUS” is one of the more interesting songs lyrically. In it, the artist reflects on his newfound fame and the sense that he’s losing himself. Lyrics such as “Tied to my chest” and “I don’t feel the way they programmed me to feel today” convey the anxiety he clearly feels. These aren’t just one-off themes, either. Much later in the album, “Mr. Hollywood” focuses on how the people around Joji, especially his loved ones, treat him now that he’s famous. While relationships are still a theme he revisits often, Joji seems to be making a conscious effort to branch out.

Joji explores various genres throughout the album, most notably on one of the lead singles, “Run.” Most of his previous music could be categorized as electronic, so it’s a strangely fitting change of pace to hear guitar on this track. The main riff pairs well with Joji’s style of singing. It sounds lonely and foreboding, which ties perfectly into the lyrics about a dying relationship. Joji finishes the song with a guitar solo, a welcome surprise that really nails home the fact that Joji isn’t married to a single genre on this album. He still retains his signature sound on Nectar, but every song sounds unique, and “Run” manages to stand out without clashing with the rest of the album.

“Reanimator,” featuring producer Yves Tumor, is one of the best collaborations on the album. The track seems to go out of its way to break that unspoken rule that the hook of a song must appear within the first 30 seconds. Tumor’s influence is all over the track, making it the biggest departure from Joji’s sound by a long shot. It’s almost as if the song is meant to show that Joji isn’t the pop star that people want him to be, indirectly tying into the themes of “Mr. Hollywood” and “Modus.” With its loose structure and industrial sounds, the track is a risk for Joji, and the album is so much better off for it.

On Nectar, Joji tries to innovate and change up his sound in major ways, when he could have just as easily stayed stagnant. While it’s not a perfect album, nor is it wildly groundbreaking, it’s a very competent work that goes out of its way to perfect on Joji’s past music. By dipping into new genres and themes, Joji has proved that he can live up to his own hype. 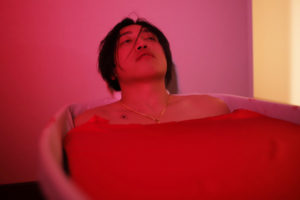