In a lecture on Friday, María Bianco Galindez, a part-time faculty member in the School of Social Work and BCSSW ’20, drew from her research surrounding the challenges of migration to the United States and discussed the nature of being a mother while migrating and seeking refuge in today’s world.

A recipient of the Kelsey A. Rennebohm Memorial Fellowship from BC’s Center for Human Rights and International Justice, Bianco documented the experiences of 17 Central American mothers who have crossed the U.S.-Mexico border with their children and resettled in the Boston area since 2014. The event, which also featured Daniel Kanstroom, faculty director for the Rappaport Center for Law and Public Policy at BC Law School, was the first in a series of events sponsored by Boston College’s Center for Human Rights and International Justice.

When Bianco interviewed asylum-seeking mothers from Central America who crossed the U.S.-Mexico border, she quickly learned that many of these women flee poverty and violence-stricken homes hoping to find a better life for themselves and their children. The rising number of mothers and children crossing international borders since 2015 has constituted an international crisis, she said.

Bianco said the recent growing difficulty that individuals seeking asylum within the United States face is a break from the past.

“As you know, the U.S. has historically been the global leader in resettling refugees and asylum seekers … However, the Trump administration has enacted several restrictions that now will make it very difficult for asylum seekers to obtain humanitarian protections in this country,” she said.

She also pointed out that although human rights frameworks hold governments responsible to protect, fulfill, and respect human rights, these responsibilities have not been extended to mothers.

“Mothers have not received adequate protections in any of the countries that they have lived, transmitted, or sought asylum. … None of these national states take serious responsibility in protecting their rights,” she said.

Bianco shared the experience of a woman, Elena, crossing the border from Mexico to the United States, which she came to learn through her research. When faced with death threats to herself and children, Elena decided to flee to the United States with her youngest daughter, forced to leave her eldest in the care of another family. After an “excruciating” journey, Elena described the pain of being separated from her daughter in a detention center to Bianco.

“When I saw my daughter behind bars in detention I said to myself, again, ‘What have I done?” Bianco said Elena told her.

Reflecting on her research, Bianco advocated for a reconstruction of international human rights frameworks.

“Existing international human rights frameworks [should] include more provisions to further protections of the rights to mothering in migration,” she said. “This could include the right to be with their children at all times and the right to raise them in conditions that are not hostile to the survival and well-being of both mothers and children.”

Kanstroom shifted the discussion to the role of habeas corpus in immigration. For decades, anyone entering the United States has had the right to due process—the right to appear before a judge, regardless of whether they entered legally and regardless of the length of their stay, Kanstroom explained.

Kanstroom said that the United States has been pushing to increase the administrative power of deportations. Building on the Clinton administration’s execution of expedited removal processes, which allowed immigration enforcement officers to order the removal of immigrants living in the country illegally without them appearing before a judge, the Trump administration is attempting to expand the power of government agents to allow them to deport migrants already living within the United States. Such a move would further lessen the already limited role of a judge in the process, Kanstroom explained.

Kanstroom alluded to a recent case, Department of Homeland Security vs. Thuraissigiam, in which the Supreme Court denied an asylum seeker the ability to petition for a writ of habeas corpus. Kanstroom said he is concerned about the impact a lack of due process rights for non-citizens will have on expedited removals. 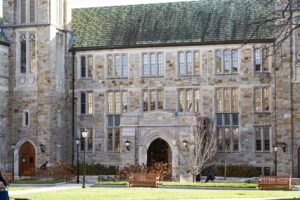