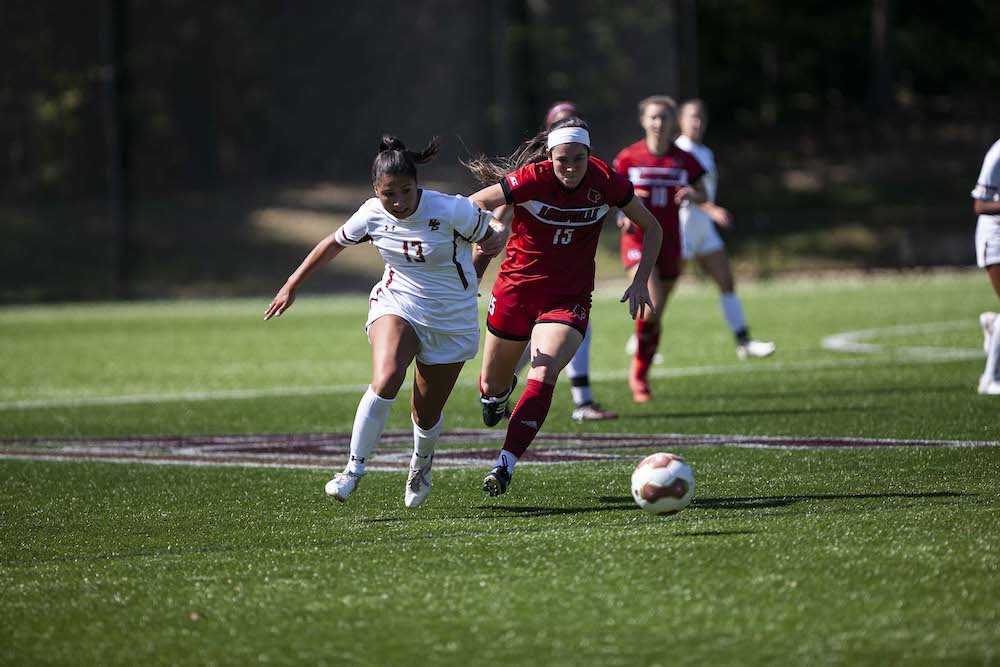 While most of the ACC women’s soccer teams began practice in July, Boston College women’s soccer did not return to campus until the end of August due to BC’s COVID-19 policies. The Eagles diminished practice time has been clear in their return to game action, as BC dropped their opener 2-0 against Notre Dame. The Eagles (0-2) struggled again on Sunday afternoon against Louisville (3-1), losing 2-0 and failing to get anything going on offense against the Cardinals all game.

Louisville dominated the game from the opening kick, easily controlling possession in the Eagles half and making threatening pushes down the wings. BC did itself no favors on defense either as it struggled to clear their lines and repeatedly provided Louisville attackers with second chance opportunities.

Louisville finally broke through in the 14th minute. Cardinals number 10 Emina Ekic received the ball at the top of the box and made a quick cut to her left to beat Eagles defender Samantha Agresti. Fellow defender Michela Agresti came flying across to cut off Ekic, leaving a Louisville attacker open in the box and Ekic slotted a pass in her direction. The pass was deflected but fell right at the feet of Taylor Kerwin, who rocketed a first time shot into the bottom left of the net.

Louisville almost scored another just minutes later, as Delaney Snyder made a great turn at the top of the box to beat a defender and found herself one on one with Eagles goalie Allie Augur. Augur made a spectacular play to parry the ball over the net, holding the Cardinals lead at one and keeping the Eagles in the game.

BC sat deep in its formation for most of the beginning of the game as it struggled to contain Louisville’s offensive onslaught. The Eagles’ first chance came in the 27th minute when star forward Sam Smith received a long ball from the defense and fought to the endline to win a corner.

Smith had struggled to make an impact for most of the game. The Eagles continually tried to find her with long balls from the defense which were mostly unsuccessful due to the aerial dominance of Louisville’s defenders. Even in the times she was able to get on the end of the pass, she was isolated on the wing and never posed much of a threat.

While the Eagles’ offense failed to muster any real threats, their defense also struggled to control the starpower of the Cardinals’ attack. In the 55th minute, Louisville defenders skied a high long ball into BC’s defense. Michela Agresti got to the ball first but her header went directly to Ekic, who pushed the ball onto her left and unleashed a beautiful curling finesse shot past the full stretch of Augur.

The strike gave Ekic her fifth goal of the season, a mark only surpassed in the ACC by Pitt star Amanda West.

The only silver lining of the game for the Eagles was their improvement from the first half to the second. After struggling to get anything going on offense in the beginning of the match, BC controlled the possession for much of the middle of the game and finally got some opportunities on net in the latter portions of the game. Forward Jenna Bike was the driving force behind these late game chances, repeatedly getting to the endline and putting in balls across the box.

The Eagles will need to find their offensive form earlier on in games if they are to get better results as they move into the middle stretch of their shortened season.