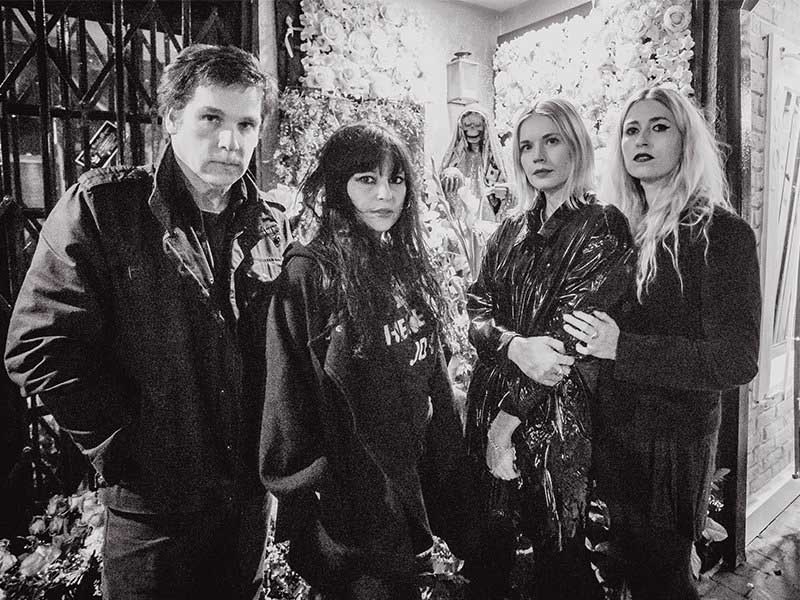 With a lineup consisting of the names Bonnie Bloomgarden, Laura “The Kid” Kelsey, Nikki Pickle, and (the surprisingly ordinary) Larry Schemel, the self-proclaimed “California doom boogie” quartet Death Valley Girls set themselves up for legendary psychedelic stardom. The most recent LP from the new wave garage-rock band, however, lands in a territory somewhere more sanguinary than legendary. Under the Spell of Joy is a retro jumble of intentionally off-key melodies and pseudo-provocative lyrics that, while slightly enjoyable in brief intervals, is ultimately a cautionary tale against living in Los Angeles for too long.

Formed in 2013 off the coattails of Hole drummer Patty Schemel and her brother (the aforementioned and ordinarily named Larry Schemel), Death Valley Girls broke onto the garage-rock scene with a twist of punk and a touch of femininity. Their early work (see ‘Street Venom’ and ‘Glow in the Dark’) boasts tracks chock full of Sleater-Kinney and Bikini Kill influence paired with a distinctly keyboard-driven sound, giving the group an authentically grunge edge with elements of gritty early 1960s blues. Upon the departure of one half of the Schemel brood, however, Death Valley Girls’ sound, along with their artistic aesthetic and stylistic choices, began to shapeshift into a bacchanalian tryst with the occult. Gone was the foundation of riot grrrl royalty, replaced instead by the haunting image of desert punks performing a seance in black lace. The soundtrack to accompany that image, it seems, is Under the Spell of Joy.

Under the Spell of Joy is the long-repressed lovechild of The Animals and a coven of L.A.-based witches attempting to lure unsuspecting listeners with the promise of playful necromancy and that infamous brand of Southern California hedonism. Key word: attempting. On the album’s opening track “Hypnagogia” (the transitional state from wakefulness to sleep), Bloomgarden’s shrill vocals waver as she chants “Healing sands from magic lands / Endless streams from mystical beings.” It’s not so much lyrical adventurousness as it is complete lyrical filler, and though it’s not the kind of writing seen in mainstream pop releases, it’s far from innovative.

It’s not just the faltering lyrics that make Under the Spell of Joy a dud—it’s the genuinely unpleasant melodies produced by the instrumentalists. A foreboding saxophone appears on several tracks of the LP, most noticeably on “Hey Dena” and “Hypnagogia,” to no pleasure of listeners.

Schemel, while an incredibly skilled guitarist, fails to show any sort of enterprise on the 11-track album. His riffs carry on for far longer than they should, heavy in their chord composition and sounding almost apocalyptic. At some points on the album, specifically in “Under the Spell of Joy” and “10 Day Miracle Challenge,” the collective sound of the group is comparable to that of nails on a chalkboard. Though tracks like “Hold My Hand” and “Bliss Out” prove to be at the very least tolerable and at the very most mildly catchy, the rest of the album is so hard to listen to that it cancels out the good parts entirely. As a unit, Death Valley Girls fall flat on Under the Spell of Joy , succumbing to the superficial, yet somehow unfashionable side of indie rock.

The most damning part of Under the Spell of Joy, however, is the fact that this is the group’s fourth album. Under the Spell of Joy, in all its wacky, ceremonial disappointment, is what the Death Valley Girls have evolved into. Seasoned musicians familiar with the landscape of both the industry and the process of songwriting, Death Valley Girls showed promise on their early albums. But in a rather unfortunate and unexpected turn, the group has turned out to be just another band from L.A., detached from the world and people around them.