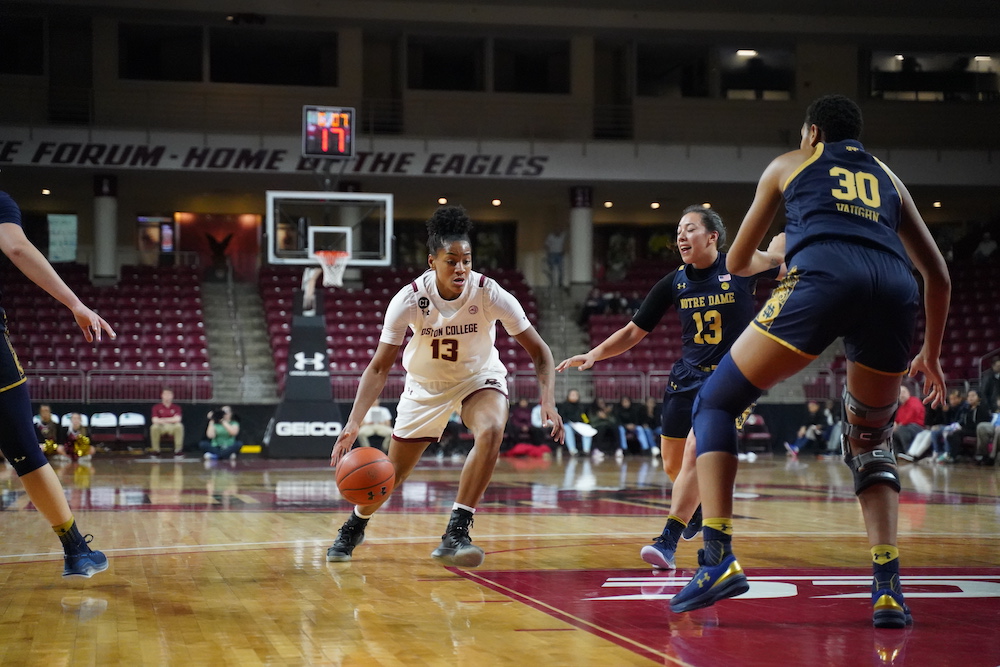 Notre Dame, North Carolina, Clemson, Syracuse, and Duke. What do all these ACC blue-bloods have in common? They all lost to Boston College women’s basketball in the span of one month last season.

Having finished the season on such a hot streak, the Eagles held their breath as they sat uneasily on the edge of the NCAA Tournament bubble. Then, disaster struck. Nine days after the Eagles finished their historic ACC Tournament run, the NCAA canceled all further games for both men’s and women’s basketball.

It was a painful blow for a team on the rise, but it was more painful for seniors Emma Guy, Taylor Ortlepp, and Georgia Pineau. The three seniors had given all they had to the program, with Guy reaching the First-Team All ACC squad in her final season. The Eagles finished the last month of their 2020 campaign 9-3, making it all the way to the ACC tournament semifinals before falling to eventual champion North Carolina State. ACC Coach of  the Year Joanna Bernabei-McNamee’s team finished the season with a record of 20-12, including a program record 11 wins in ACC play.

Now, fast-forward six months from the COVID-19-related cancellations. McNamee’s Eagles are back in the gym, hungry for more after their tournament dreams were dashed by an unforeseen pandemic. It’s always tough to lose three team leaders to graduation, but what they may lack in senior leadership they more than make up for in grit, toughness, and talent. There are plenty of reasons to be excited about BC women’s basketball for the 2020-21 season, but here are just a few:

With the losses of Guy and Pineau, the Eagles are missing their two starters in the frontcourt. Guy’s skill on the low post made her a tough matchup for even the most athletic and heralded ACC centers. Pineau could get buckets against anyone, but what BC may miss most was her effort on defense. Pineau was more willing to take a charge than any other player on the team.

So how do you replace two players like that?

Akunna Konkwo arrived in the summer of 2019 but immediately tore her Achilles tendon. Though she’s never played a minute of ACC basketball, the 6-foot-2 center was highly regarded by ESPN and 247Sports for her polished footwork and rebounding skills in high school. In addition to Konkwo, 6-foot-2 true freshman Sydney McQuietor offers the Eagles even more size and athleticism at the power forward position. Combine these two with junior Clara Ford, and the Eagles look to have more than enough size, strength, and skill in the paint.

Though Ortlepp’s shooting and fast break capabilities will be missed, the Eagles’ new freshman guards look as though they can help fill the gap. Both guard Kaylah Ivey and guard/forward JoJo Lacey bring athleticism to the wings. Lacey, a five-star recruit on multiple recruiting sites, looks ready to offer an immediate impact with her length and deep range. Both guards will be sure to get some minutes this year.

BC’s guards are quick, tough, and they control the floor like experienced veterans, especially juniors Cameron Swartz, Makayla Dickens, and Marnelle Garraud, and sophomore Jaelyn Batts. Garraud led the team in 3-point percentage and finished second in the ACC in steals per game, totaling 62 throughout the season. Dickens led the Eagles in assists with 3.8 per game. Swartz, though she was in and out of the starting lineup, added an average of nine points per game while shooting 30 percent from deep. Batts provided some timely steals and buckets off the bench.

Though they were good last season, the Eagles’ frontcourt looks poised to take the next step toward greatness this season. All three juniors—Swartz, Garraud, and Dickens—improved their shooting percentages and lowered their combined turnovers between their freshman and sophomore seasons. Given the play at the end of February just a few months ago, they look like they’ll be even better come November.

It’s strange when the most senior players on a team come off the bench. But that doesn’t mean they’re poor players, or poor leaders. Seniors Sydney Lowery and Milan Bolden-Morris are the only two players on the Eagles’ roster who predate McNamee. Both players saw a decline in their minutes last season, but they played vital supporting roles. With the loss of two very good shooters in Pineau and Ortlepp, as well as the addition of talented but untested freshmen, Lowery and Bolden-Morris could very well see an increase in their minutes and an increase in the team’s production as a result.

Bolden-Morris finished third on the Eagles’ roster in 3-point percentage. Aside from that, anyone who watched the team could tell you that when it came to catch-and-shoot threes, no one was more effective than Bolden-Morris.

With a roster depleted of senior leadership, count on Lowery and Bolden-Morris to light it up from beyond the arc.

The Heart and Soule

Anyone who watched the ACC tournament last year could tell you who was the most impactful player in the tournament. It wasn’t Louisville’s Dana Evans or NC state’s Elissa Cunane. It was Taylor Soule. Soule almost doubled her point average from a year ago, jumping from 7.7 points per game in 2019 to 14.5 points per game in 2020.

What was even more impressive was her poise in big games. In the Eagles’ three ACC tournament games, Soule averaged 17.4 points and nine rebounds per game. Soule also tallied 26 points against Syracuse in the game that clinched the Eagles the No. 6 seed in the tournament. Soule was named the ACC’s Most Improved Player last season. This year, she could be a dark horse for ACC Player of the Year. The Second Team All-ACC forward only got better with each game.

There’s really no telling how far this team could go or how much they could accomplish. But know this: This BC team is stacked. They’re battle tested, they’re hungry, and they may be more talented than any squad in program history.

Music on Zoom: Playing it By Ear
‘Utopia’ is a Pandemic Story That Looks a Lot Like Reality