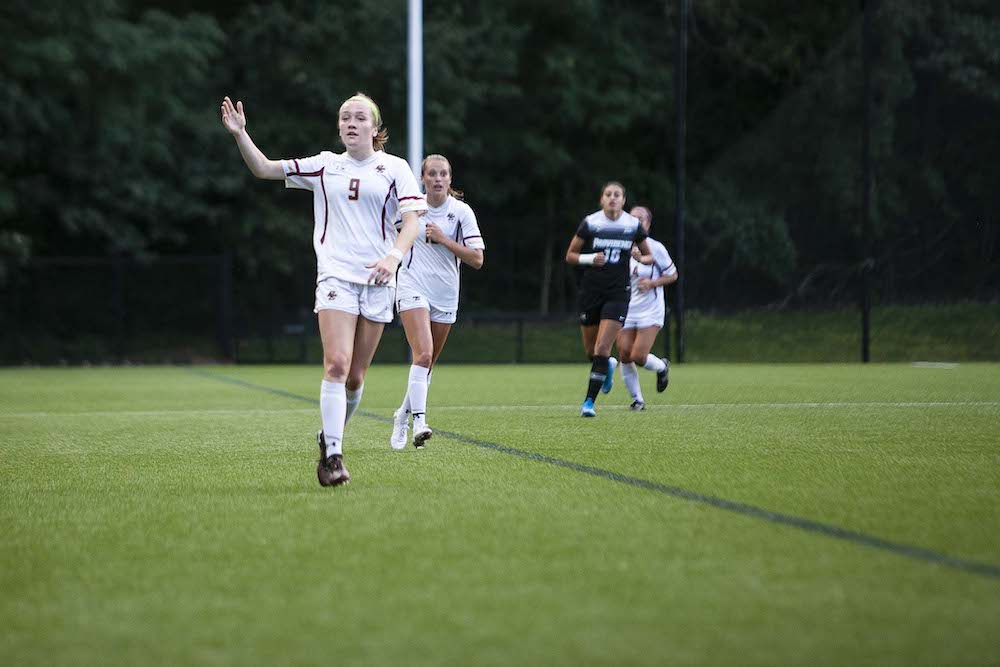 Boston College women’s soccer has struggled massively on the offensive end of the pitch so far this season, failing to score in its first two matches of the year, both 2-0 losses. The Eagles’ offense, led by a stellar performance from Sam Smith, finally found its form on Thursday, but the defense could not keep up, and BC (0-3, 0-3 Atlantic Coast) fell 4-3 to Pittsburgh (7-2, 2-2).

Still, the Eagles’ scoring onslaught was not enough to overcome Pitt’s potent offense. Amanda West scored twice for the Panthers, increasing her goal total for the year to nine and maintaining her position as the highest scorer in all of Division I.

West imposed herself on the game early, taking on Eagles goalie Allie Augur one on one in the fifth minute after getting on the end of a beautiful pass through BC’s defense. West cut left past Augur, who crashed into West’s legs, sending her to the penalty spot, where she calmly slotted the ball into the bottom right to give the Panthers a 1-0 lead.

The little offense that the Eagles showed in their first two contests primarily came in the second half, but BC came out firing much earlier on Thursday.

In the 10th minute, Pitt defender Kate McKay skied a header into the air after the Eagles lofted a ball into the box. Panthers goalie Katherine Robinson came rushing out in an attempt to catch the ball but misjudged it, and the ball glanced off BC forward Jillian Jennings. Smith ran onto the ball and, with Robinson still out of the goal, smashed it into the open net with ease.

The Eagles scored again just minutes later after Smith put a strong header toward goal off a corner and Karras deflected it into the net. With the goal, the Eagles had their first lead of the game at 2-1.

Karras was spectacular for the Eagles all game long, routinely beating Pitt defenders off the wing and playing wonderful long through balls to BC’s strikers.

Though the scoring finally settled down in the middle parts of the game, both teams continued to bare their teeth. Midfield play seemed to hardly exist for much of the game, as both sides flew up and down the pitch and had no struggles getting close to goal. The Eagles were particularly effective on the counterattack, as Smith and Bike were perfectly in sync leading each other up the pitch with well-weighted passes.

West’s spectaculars came through again for Pitt in the 54th minute as she received the ball at the top of the box and chopped it to her left foot, beating a trio of Eagles defenders and floating a shot over a rushing Augur.

The Panthers added another goal in the 61st minute when Emily Yaple got on the end of a free kick from McKay and flicked it high into the net, making the score 3-2.

BC wasted no time equalizing. Alison Heckman stole the ball from a Pitt midfielder right after kickoff and played a through ball to a cutting Smith. Smith slid the ball across the box to Bike, who struck a bouncing shot that glanced off the right post and into the goal. Bike’s goal came just 16 seconds after Yaple’s strike.

Pitt took the lead again in the 73rd minute when Anna Rico calmly put the ball on her right foot at the top of the box and fired an incredible long shot into the top right corner.

Despite the Eagles’ overall defensive struggles, BC center backs Sam and Michela Agresti showed flashes of tremendous individual promise. Both were stellar at intercepting passes and at beating Pitt forwards to through balls.

The Eagles’ offensive performance bodes well for the rest of the season, but BC will have to continue improving its overall team performance as it continues to search for its first win of the season.