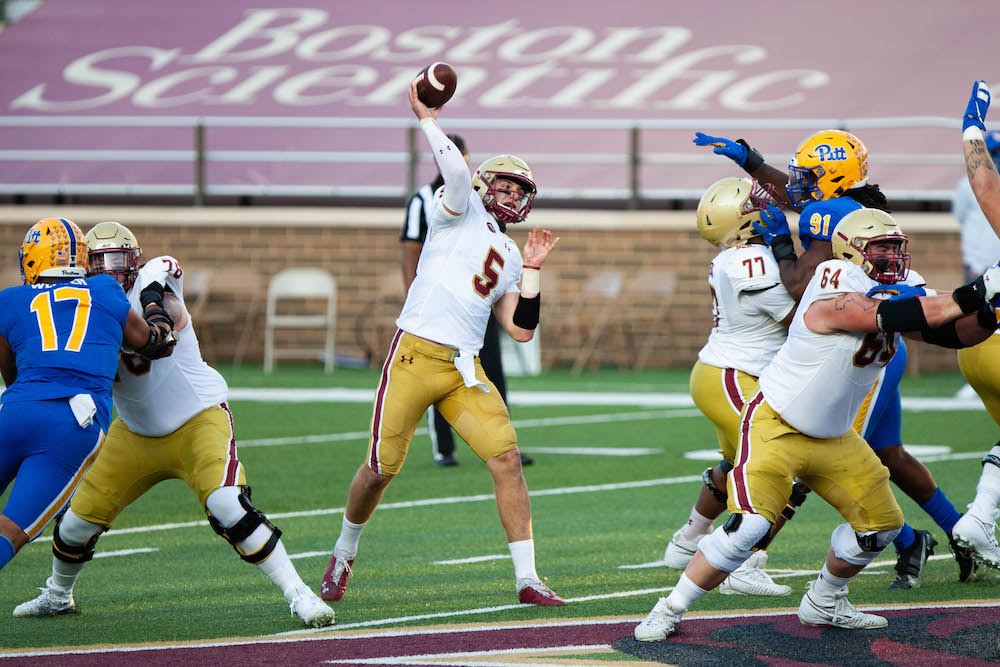 Boston College football nearly squandered a 10-point third quarter lead in overtime, but Pittsburgh kicker Alex Kessman missed the game-tying extra point. If there were any fans in Alumni Stadium, the crowd would’ve gone wild. Instead, the team jumped off the sidelines and swarmed each other in the center of the field as BC (3-1, 2-1 Atlantic Coast) eked out a 31-30 victory over the Panthers (3-2, 2-2).

Phil Jurkovec and Zay Flowers were the stars of the night, as Jurkovec passed for 358 yards.  Nearly half of his yardage went to Flowers, who racked up 162 yards and three touchdowns. Still, the Eagles showed many of the same glaring issues that have plagued them in the first three games of the season, mainly their failure to get push in the run game and to protect Jurkovec in the pocket. Here are three takeaways from the game:

The Eagles Are Best Under Center, but There’s Work to be Done

If there was one thing that Eagles fans united behind at the end of the Steve Addazio era, it was that without AJ Dillon, BC needed a pass game. Head coach Jeff Hafley and offensive coordinator Frank Cignetti Jr. have certainly brought that style of offense that has been missing in years past, but BC’s offense has repeatedly shown that it does better from under center.

Saturday’s game was no exception. Both Jurkovec and the offensive line looked much more comfortable coming out from under center. While teams often opt for the shotgun to give the quarterback more time in the pocket, the formation had the opposite effect for the Eagles. Jurkovec was under siege all game long as the offensive line struggles continued, and Pitt came away with five sacks. Jurkovec also shoulders a lot of the blame for the Eagles’ struggles out of the shotgun. He looked jumpy and struggled with his footwork and timing, often moving disjointedly around the pocket and into the way of oncoming pressure.

Jurkovec is a totally different quarterback from under center, taking confident drops and looking much more in sync with his receivers’ timing. A big piece of the increased success comes from the Eagles’ play action from under center. The threat of the run prevented the Panthers’ defensive line from immediately keying in on Jurkovec, giving Jurkovec the confidence to look downfield and connect on deep shots, like this one to Zay Flowers:

The Eagles also looked better run blocking from under center, finally showing the ability to get push and create holes that they have lacked for much of the season.

Still, the run blocking is nowhere near where it needs to be for BC to pose a legitimate threat rushing the ball with any consistency. The duo of David Bailey and Pat Garwo averaged a measly 2.5 yards per attempt in the game.

After allowing long completions on Pitt’s first two possessions, the Eagles’ secondary displayed impressive coverage skills for the rest of the game. BC’s secondary was particularly effective at preventing Panthers quarterback Kenny Pickett from connecting on downfield shots. While Pickett passed for a respectable 266 yards, he completed just 52 percent of his passes and averaged only 5.5 yards per attempt. Brandon Sebastian put in a dominant performance, blanketing Pitt’s receivers all game. Fellow starters Elijah Jones and Josh DeBerry also played lockdown defense, with DeBerry coming up with a huge fourth-quarter interception. The Eagles also got strong play from their depth players as Jason Maitre and Tate Haynes played well.

Haynes cost the Eagles a stop early on in the game by jumping offside on fourth down, but he more than redeemed himself down the stretch with great coverage at the end of the game.

The Eagles’ success at covering downfield forced the Panthers’ offense to center on short passes near the line of scrimmage, where BC’s linebackers were largely able to prevent Pitt’s receivers from picking up many yards after the catch.

Getting into the Backfield but Struggling to Finish

BC’s defensive line and linebackers had no trouble getting into the Panthers’ backfield, repeatedly getting pressure on Pickett and swarming Pitt’s running backs. Marcus Valdez led the charge for the Eagles as usual, tallying 1.5 tackles for loss and wreaking havoc on the left side of Pitt’s line. Even so, the Eagles only came up with one sack despite the constant pressure. Pickett proved elusive all game, dodging and slipping away from oncoming pressure and repeatedly turning what seemed to be sure losses into first downs. BC’s commitment to getting into the backfield left the Eagles with nobody in the middle of the field to track Pickett’s runs, and he had plenty of space after breaking the pocket.