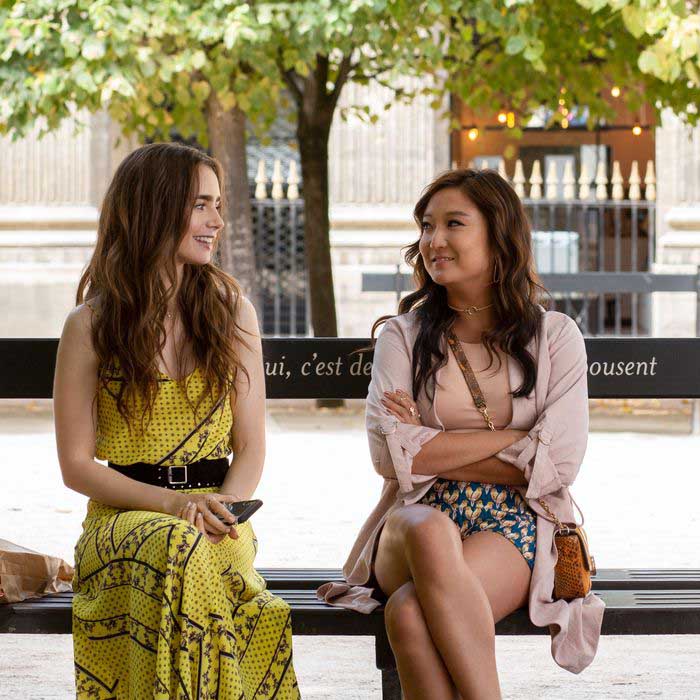 Emily in Paris is the newest mindless Netflix watch to add to your list of study break options. Ridiculous in the way that the best romantic comedies are, the show offers a romanticized European escape that’s guaranteed to take anyone’s mind off the real world. Whether it’s the unrealistic plot or super attractive cast, there’s a little something for everyone, making Emily in Paris one of the most watchable new shows on Netflix.

As with any great romantic comedy, the plot begins with a positive pregnancy test. Emily’s (Lily Collins) boss at Chicago marketing firm Savoir discovers she’s pregnant, forcing her to abandon her previous plan to become the American voice in the company’s Paris office. Emily is elected to fill the role instead and is soon off to start a new job and life in her dream city. But, adjusting to the new culture proves difficult to Emily, whose unaltering and sure personality makes her more enemies than friends at first.

Emily’s bold personality leads to some cringe-worthy moments, and her character could easily tank the entire show. Yet, there’s something compelling about the overall ambiance of Emily in Paris. Whether it’s the romantic Parisian setting or the predictable yet calming character of its plot, it’s hard not to become hypnotized by Emily in Paris.

The story takes off with Emily’s arrival to Paris, and rather quickly. The breezy script and unrealistic plot allow the show to venture in a variety of different directions that will keep you on the edge of your seat for the entirety of the 10-episode first season. Emily deals with complex love triangles all the while balancing her social media presence with growing respect for her job at the Paris office. There’s a lot that goes on, meaning there’s a little something for everyone.

Many of the events in the show remain inexplicable. But, mindless television usually requires some suspension of disbelief. For instance, why does Emily’s boss decide to trust her enough to send her to Paris in her place? And what’s more, why was Emily so excited to move to a country where she knows nothing about the language or culture? And how did she become an Instagram influencer when she began the show with only 48 followers? These are all interesting points to consider, but maybe you shouldn’t.

One of the main issues the show captures rather realistically is the pressure on marketing firms to compete with the growing power of social media influencers. Emily exists as a middleman for the two worlds, combining traditional marketing strategies with new, unconventional ones to excel at her position in Paris. Moreover, the show rather thoughtfully tackles sexist culture, which Emily takes upon herself to combat. Lighthearted and happy as it is, these larger, underlying messages give the show a semblance of seriousness.

But if the busy plot doesn’t intrigue you, then the show’s charming cast should be enough of a reason to consider binging the series. Besides Lily Collins, Lucas Bravo has recently received attention for his role as Gabriel. Grey’s Anatomy and Private Practice fans should be drawn in by Kate Walsh, who plays the role of Emily’s boss from the American office. The cast as a whole compliments the lighthearted plot, strengthening the addictive nature of the show.

Emily In Paris is meant to be quickly binged and possibly forgotten afterwards. As long as you don’t overthink the fallacies of the plot and look past Emily’s more embarrassing moments, this show is a must-add to your watch list. There’s something relaxing about mindless television, and the gorgeous Parisian setting—along with a great-looking cast—make the show irresistible.