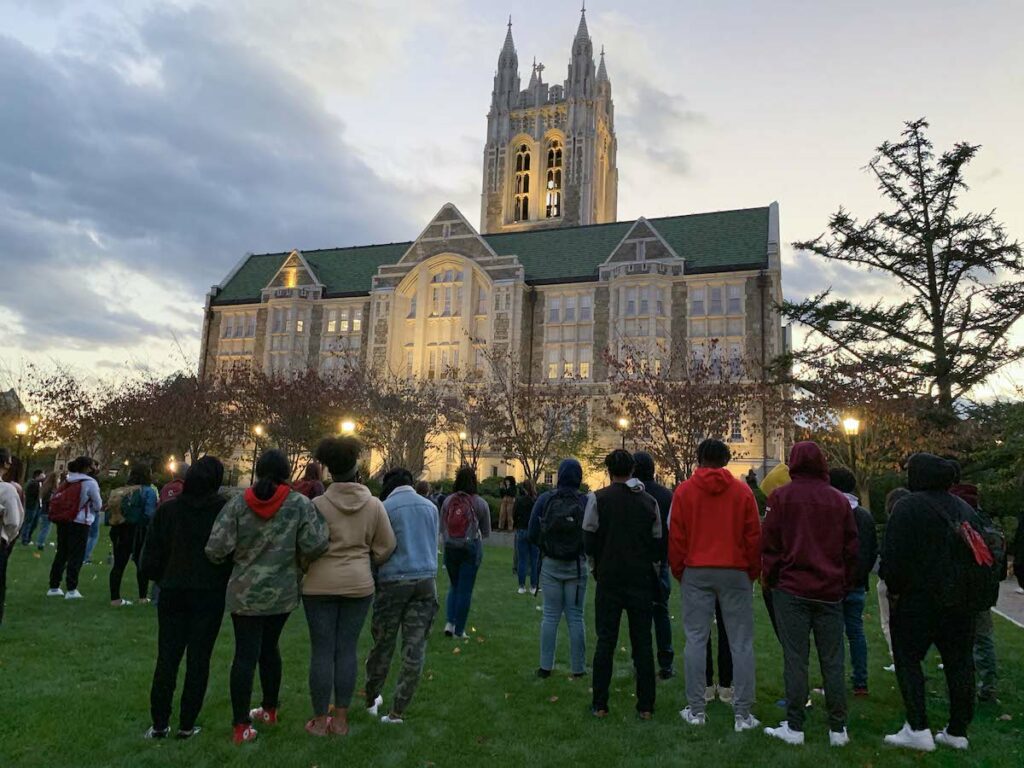 Kathryn Destin is familiar with two different kinds of pictures at Boston College. The first is overtly racist—anti-Black slurs plastered in sharpie in a residence hall and a racist snapchat that spread across campus. The second cuts in a subtler way: social media posts of beautiful white women, which remind her she doesn’t look like the typical BC student.

“I’ve woken up to endless social media posts of women who meet the eurocentric beauty standards of this campus, leading me to feel I was the biggest and ugliest eyesore to walk across this lawn,” said Destin, MCAS ’21.

Destin shared her experiences with racism and sexism with dozens of students on Oct. 7 at a Black Women Matter candlelight vigil on Gasson Quad. Organized by FACES, BC’s anti-racism student group, of which Destin is a member, the vigil gave Black students a space to share stories, poems, and songs about the Black and female experiences.

“I’d be lying if I said being Black on campus has been smooth sailing,” Destin. “It’s been absolutely painstaking to walk across this lawn most days and pretend that everything is fine.”

Destin played “Four Women,” a song about the identity of being a Black woman and the oppression Black women face. Attendees socially distanced across the Quad and held candles marked with names of a Black women whose stories had “gone overlooked, untold, and unnoticed,” an organizer of the event who identified herself only as Christina said. Atatiana Jefferson and Breonna Taylor, both of whom were killed by police while inside their homes, were two of the names on the candles.

“Black women as a whole have been oppressed, marginalized, and quieted, and we believe that their voices should be heard,” Christina said.

Members of FACES said during the event that their plan to honor the lives of Black women with the vigil was sparked by a grand jury in Kentucky’s decision not to charge any police officers with killing Breonna Taylor.

“Black women are neglected, unprotected, and disrespected,” Destin told The Heights. “And we felt the least we could do is honor them today, and we hope to continue doing so.”

Christina, also a member of FACES, expanded on the theme of the vigil: the oppression of Black women.

“The term misogynoir was coined to describe the unique form of oppression that Black women face simultaneously through anti-Blackness and misogyny,” Christina said.

Attendees of the vigil held a moment of silence to honor the loss of these Black women’s lives, followed by a reading of their names. Brian Rudolph, a member of FACES and Lynch ’22, reflected on the impact of reciting these women’s names.

“At the end of the day, these are people, and they deserve respect,” said Rudolph.

After a round of applause, Destin returned to the platform to share her experience as a Black woman.

“Every waking day, I am faced with hatred simply because I am a Black woman,” Destin said. “People always have something to say about me and how I should fix myself according to the impossible standards society has set.”

After another round of applause, a member of FACES who identified herself only as Alex recited poems of other Black women’s experiences that moved her.

“‘I am a Black woman every day of my life. I have Black features that seem flawed to the world but beautiful to me,’” Alex recited from one of the poems.

Régine Jean-Charles, a professor in the Romance Languages and Literatures Department, emphasized her desire to show support for Black women at BC by speaking at the event. She shared a letter written by author Toni Morrison to Black women.

Jean-Charles’ reading was followed by a lengthy round of applause, and a “we love you Professor” could be heard from a member of the crowd.

Destin shared a rendition of Maya Angelou’s “Still I Rise,” and she concluded the vigil with a final request.

Featured Image by Amy Palmer / For the Heights