Home » And the Crowd Goes Wild: Connecting with the Cutout Crew
Sports, Football

And the Crowd Goes Wild: Connecting with the Cutout Crew

When BC football kicked off its home opener against Texas State on Sept. 26, the team looked out into the bleachers of Alumni Stadium and was greeted not by fans watching the game in person, but by the “cutout crew.”

At first, the cutout crew was small: concentrated just behind the uprights, a couple dozen “people” sitting in the back of each end zone. But by the time BC kicked off against Pittsburgh on Saturday, the crowd had practically doubled in size, and it now includes cheerleaders, celebrities, and even dogs. And when the Eagles won in overtime, the cutouts were there to see the celebrations on the field.

According to Associate Athletics Director of Marketing and Fan Engagement Jamie DiLoreto, launching the “cutout crew” program—which allows fans to purchase a cutout for $25—was one fun solution to an empty stadium for this football season.

Seeing that professional teams, such as the Red Sox, were not able to host fans in person, DiLoreto knew that Boston College sports would be required to follow the same regulations, meaning they would have to create new opportunities for fans to connect with the team. 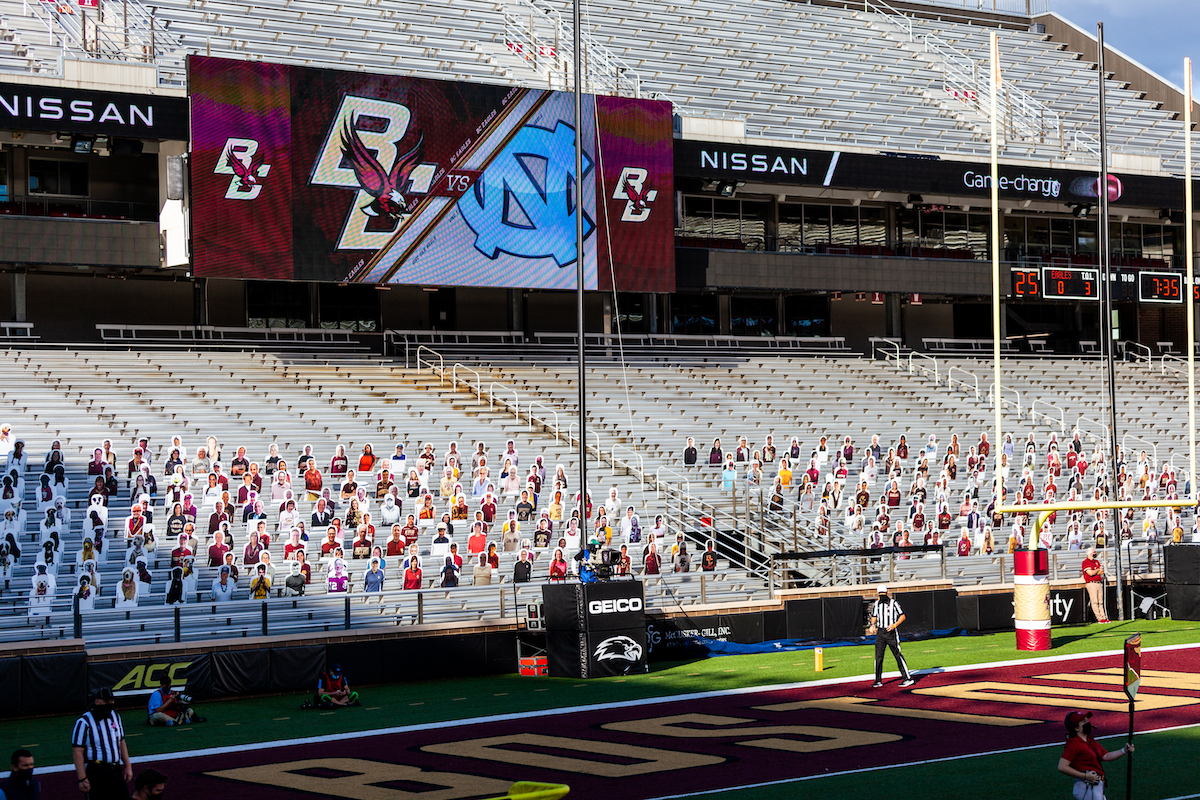 “Our job is fan engagement,” DiLoreto said. “We know these people. We’d love to have them on game days, but we can’t.”

According to DiLoreto, many parents and friends of the football players have purchased cutouts in order to be as “close” to the game as they can be. Fans can also order cutouts of pets to be placed throughout the stands.

“I send texts all the time saying, ‘Hey, I’m putting your head up in the stadium!’” DiLoreto said.

All the proceeds from the cutout crew will go directly into the Flynn Fund, BC Athletics’ major fundraising effort. Those who purchase them can also pick them up at the end of the 2020-21 season.

The cutout crew also includes a section for “Baldwin’s Buddies,” a zone specifically for children, which was designed as a way to get kids engaged as they cheer on the team from a distance. According to DiLoreto, one “Baldwin’s Buddy” is picked each game to win a $50 gift card from a sponsor of BC Athletics.

Way back in section ZZ is an entire section full of cutouts of Ted Griffin, BC ’05, whose friends decided to pay tribute to him after his unexpected passing. Griffin and his friends always sat in section ZZ to cheer on the Eagles, according to a tweet from BC.

His friends are paying tribute after he passed away unexpectedly. Section ZZ is where the group would gather to cheer on the @BCEagles. #WeAreBC | #ForBoston 🦅 pic.twitter.com/WadU4uNimp

Former Heights editor Andy Backstrom, BC ’20, whose parents purchased a cutout for him, said he has enjoyed being able to stay tuned into the athletics program at Boston College as much as possible. Backstrom said he got a text from a BC friend as soon as the viewers caught a glimpse of his cutout during BC’s game against North Carolina.

“It’s a great thing BC’s doing,” said Backstrom, who still reports on BC athletics through EagleAction. “They need to have a way to fill that void. It creates some sort of normalcy so when players are on the field, they’re not just looking at empty seats.”

Nate Lyon, BC ’20, who tried to stay until the end of every home game throughout his time at BC, said he has always had a die-hard mentality when it comes to football. Now, with his cutout in the stands, he can stay even past the final whistle.

Lyon said that although the cutouts feel like a small action, if everyone gets one, it will result in a larger cutout audience and more school spirit. 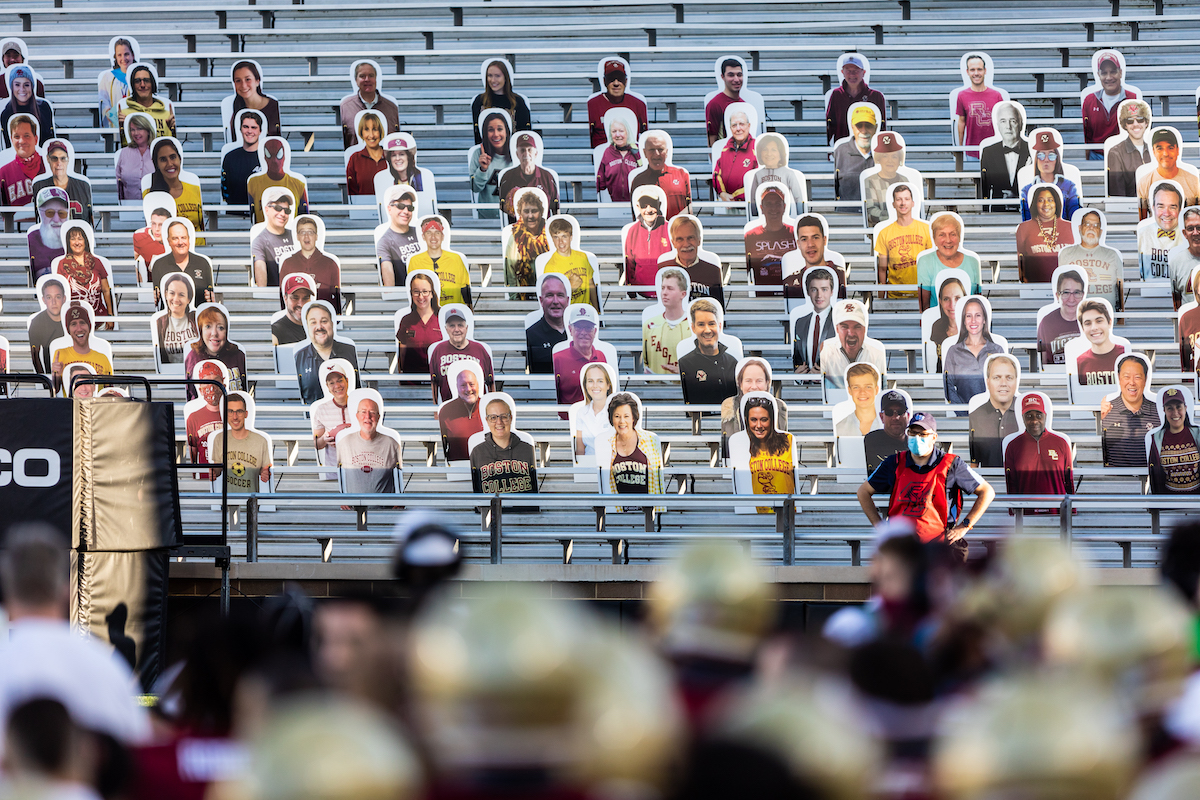 And although the cutouts can’t create the same on-field atmosphere that thousands of cheering fans can, BC also plays music and artificial fan noise during every home football game. The Eagles can dance on the sidelines to “Mr. Brightside” and “Shipping Up to Boston” just like they usually would.

DiLoreto also said that if fans aren’t allowed to attend hockey and basketball games in the coming months, the cutout crew will continue to occupy the stands.

Noting that this will not be a normal season for sports, DiLoreto said that BC Athletics is aiming to engage the highest number of fans that it can, especially students.