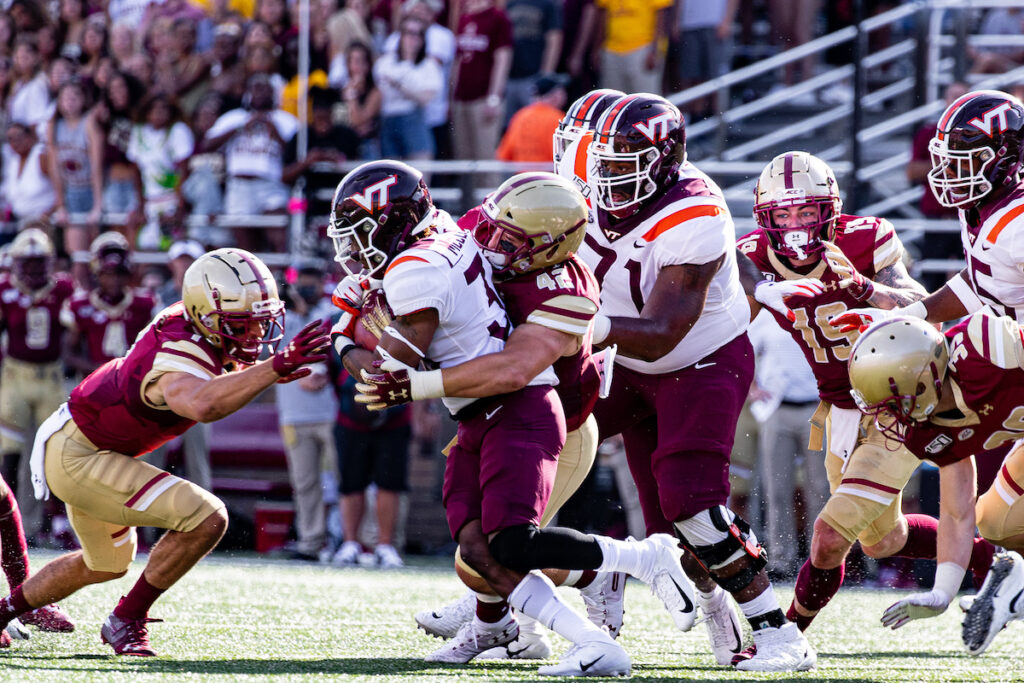 Despite Boston College’s (3-1, 2-1 Atlantic Coast) promising start to the season, the national narrative has not been promising for the Eagles ahead of Saturday’s game against No. 23 Virginia Tech (2-1, 1-1). The Hokies, led by one of the best offenses in the nation, are favored by 13 points, and ESPN’s Football Power Index gives them a 79.1 percent chance of coming away with a win. Still, the Eagles’ success against Virginia Tech’s past opponents is reason to be optimistic. Virginia Tech fell 56-45 last week to North Carolina, a team that the Eagles lost to by just a four-point margin. The Eagles also dominated Duke to the tune of 28-6 while the Hokies only won 38-31.

The game will be broadcast on ACC Network and the ESPN app.

Audio coverage of the game will be available on BCEagles.com.

While the Hokies lead the all-time series 18-10, the Eagles have won the matchup in each of the past two seasons. In 2019, BC beat Virginia Tech 35-28 in the season opener as the combination of Anthony Brown and Zay Flowers proved too much for the Hokies’ defense. The ground attack was the story of the game for the Eagles in 2018, as BC rushed for over 200 yards in a 31-21 victory.

The teams met for the first time in 1993, two years after both teams moved to the Big East. They’ve Virgnia Tech moved to the ACC in 2003, and they’ve played every year since the Eagles made the switch in 2004. The teams met in the ACC Championship games in 2007 and 2008, with the Hokies winning both contests. Home field advantage, which Virginia Tech will have on Saturday, has meant little for the Hokies historically in the series as the Eagles have picked up five wins in the 12 contests played in Blacksburg.

Hokies head coach Justin Fuente is 2-2 against the Eagles all time. Jeff Hafley has never previously coached against Virginia Tech.

What to expect from Virginia Tech:

With 2019 starting quarterback Hendon Hooker out for the beginning of the season with COVID-19 and another unnamed illness, Oregon transfer Braxton Burmeister took the majority of snaps from under center to open the season. Burmeister struggled in the first two games, completing just 44 percent of his passes. After playing poorly in the first half of the Hokies’ game against UNC, he was replaced by a finally healthy Hooker. Hooker was a breakout star as a sophomore last year, averaging an impressive 9.6 yards per attempt and throwing 13 touchdowns with just two interceptions. Hooker continued his strong play in the second half of the UNC game, throwing for 136 yards and two touchdowns.

Despite the uncertainty at the quarterback to open the season, Virginia Tech has still built one of the best offenses in the nation, ranking 14th in yards per game and seventh in points per game, thanks to the strength of its running game. Running back Khalil Herbert, a grad transfer from Kansas, has been a bona fide superstar for the Hokies. Virginia Tech has a dominant offensive line, and Herbert has taken full advantage, churning out 449 yards on the ground on a nation-leading 10.4 yards per attempt. The offensive line is also strong in pass protection and has only allowed five sacks on the season.

While the Hokies’ offense is one of the best in the nation, their defense ranks in the bottom 10 nationally in both yards allowed per game and points conceded. The rush defense has been especially generous, allowing opponents a staggering 225 yards per game. Still, the overall numbers do not tell the full story for the defense. Both NC State and UNC racked up large percentages of their yardages and scoring while the game was already in garbage time. Advanced defensive rating metrics, which devalue the statistical importance of garbage time plays, explain Virginia Tech’s defense more than the raw numbers. Bill Connelly’s SP+ rankings consider Virginia Tech’s defense to the No. 30 in the nation. It is worth noting that Connelly’s rating system also considers the Hokies’ offense to be only the 28th best nationally, as much of Virginia Tech’s offensive production also occurred in garbage time.

The pass rush is the strength of the Hokies’ defense. Virginia Tech has collected 14 sacks on the year, with defensive linemen Amaré Barno and Emmanuel Belmar each notching three apiece. Another player to watch is star linebacker Rayshard Ashby, who notched 17 tackles for loss in 2019 and was named Second Team All-ACC. The Hokies have also been beset by COVID-19 all season, with at least 15 players missing from all of the first three games of the year due to injuries or COVID-19-related issues. These absences have primarily come from defensive units, and the Virginia Tech defense should see improvement as more and more of the players return.

The Eagles have their work cut out for them this weekend. With Hooker permanently back under center and Herbert in the backfield, containing the Hokies’ offense will be a tall task for BC. Virginia Tech’s struggling rushing defense would be a phenomenal opportunity for past BC teams, but this iteration of the Eagles’ offense has shown no ability to produce anything past an anemic rushing attack. Still, BC has performed better against Virginia Tech’s previous opponents than the Hokies have, and it finally has the weapons through the air this season to compete in a shootout. Expect fireworks.

Eagles Fall in Overtime After Regulation Stalemate Against Blue Devils
BC Falters Against Orange Offense, Unable To Secure First Victory