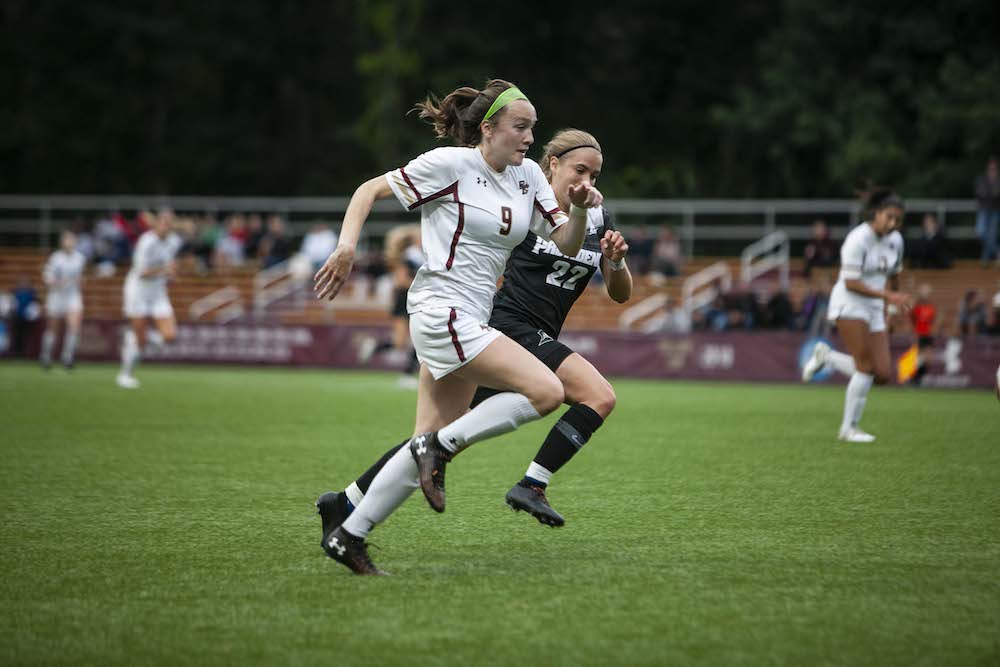 Atlantic Coast Conference opponents have usually presented few issues for North Carolina, as the Tar Heels entered their game with Boston College with a 38-game unbeaten streak in ACC regular-season play. Sunday’s match was more of the same for No. 1 North Carolina (6-0), easily dispatching the Eagles (0-5) with a 3-1 victory.

BC moves to 1-20 all time against North Carolina with the loss on Sunday.

The Eagles held their own in the first half, threatening the Tar Heels’ goal on several occasions and holding the score to a respectable 1-0 margin. The floodgates opened after halftime, as UNC scored just 24 seconds into the second half and added another less than 10 minutes later to go up 3-0.

BC’s lone goal came on a strike from Jenna Bike in the 83rd minute, when the outcome of the game was already beyond doubt.

Despite North Carolina’s lofty reputation and offensive prowess, the Eagles came out of the gates strong and showed no intention of sitting back on defense. BC controlled the opening minutes of the game and consistently showed the ability to push into the Tar Heels’ defensive third.

In the seventh minute, the Eagles won a free kick at the top of the box and, lining up three players over the ball to trick the North Carolina defense, used deception to set up a good chance for Jillian Jennings. Jennings’ shot bounced off a Tar Heel defender, forcing an acrobatic save from North Carolina goalie Claudia Dickey.

It was all Tar Heels from then on. Isabel Cox got on the end of a through ball in the 19th minute and beat BC center back Michela Agresti to set up a one-on-one chance with BC goalie Allie Augur. Augur stopped Cox’s first shot but the rebound ricocheted up in the air and Cox easily headed it over Augur into the net.

UNC particularly tested the aerial abilities of the Eagles’ defense, as the Tar Heels won five corners in the first half and also repeatedly whipped crosses into the box in the flow of normal play. BC held up impressively under the pressure, with Augur showing skillful positioning and a good punch out of the box.

While the Eagles were largely able to hold up to North Carolina’s offensive pressure in the first half, the game told a different story after halftime.

The Tar Heels kicked off and immediately drove deep into the Eagles’ half. North Carolina midfielder Rachel Jones tried to play a ball across the box from near the endline and, after her first attempt was blocked, her second ball found the foot of Brianna Pinto. Pinto, a hopeful for the U.S. National Team, connected and put a shot past the reach of Augur.

The Eagles finally got on the board in the 83rd minute. Star forward Sam Smith swung a ball into the box from the right wing, and a mishit from a Tar Heel defender laid the ball right at the feet of Bike, who tucked a shot perfectly into the left corner.

Bike’s goal was just the second that North Carolina had conceded all season.

Smith struggled to make much of an impact all game. She was swarmed by multiple North Carolina defenders whenever she touched the ball, and her through balls to Bike were mistimed and inaccurate.

Freshman midfielder Zoie Allen was one of the few bright spots for the Eagles, demonstrating elite speed in tracking down Tar Heel forwards on defense and slick ball skills on attack.