Home » Notebook: BC Shoots Itself in the Foot in VTech Loss 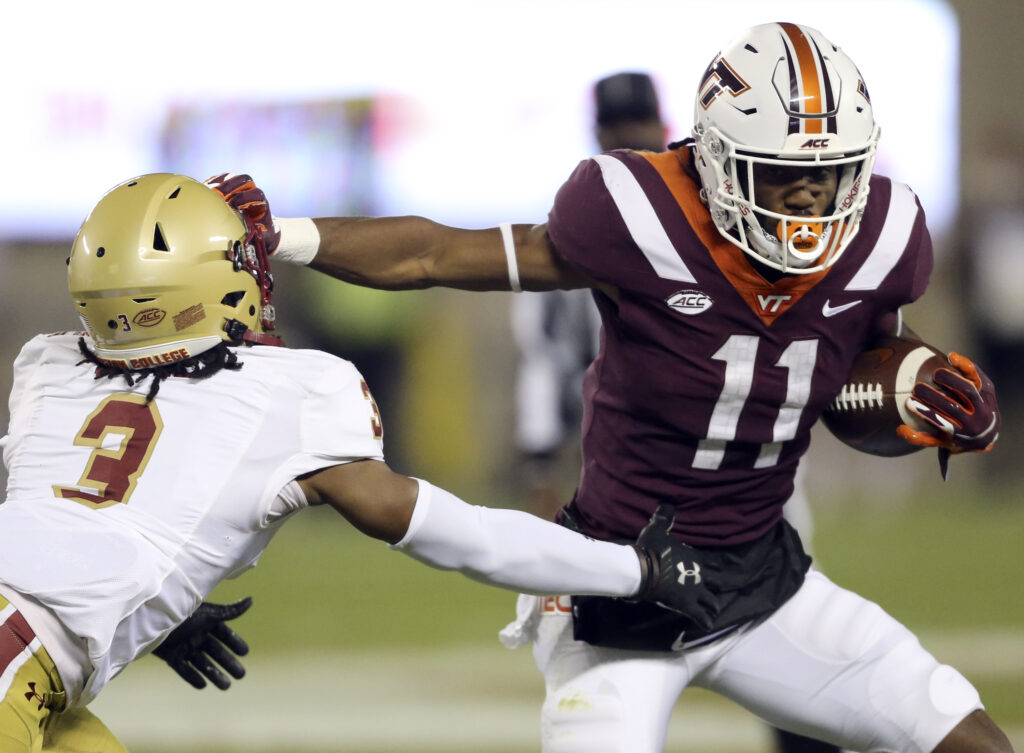 Notebook: BC Shoots Itself in the Foot in VTech Loss

Entering Saturday night in Blacksburg, Boston College football was the clear underdog. Oddsmakers had No. 23 Virginia Tech as 13-point favorites, but even so, Eagles fans were hopeful. VT had given up more points against BC’s previous opponents than the Eagles had, and of course, in Boston, it’s all aboard the Hafley train. First-year head coach Jeff Hafley has the football world buzzing, and his energy and drive gives fans a reason to believe in the underdog. But faced with a chance to take down their first ranked opponent since 2014 and crack the AP Poll, the Eagles shot themselves in the foot, and they return to Chestnut Hill with a 40-14 loss on their record.

BC Shoots Itself in the Foot

There’s no question about it: no one can win a football game by turning over the ball five times, especially when the other team protects it as well as Virginia Tech did. BC coughed up the ball on three of its first four drives, including two fumbles in the red zone. Phil Jurkovec threw two interceptions, which he said after the game were “inexcusable.”

If there’s one bright spot, though, it’s that BC allowed just 20 points off those five turnovers, as the Eagles’ defense held Virginia Tech to a field goal attempt on three of the five giveaways. BC let go of one fumble on its own 17-yard line, setting up Virginia Tech with a short field, but the defense held, and the Hokies settled for three.

After a stunning 358-yard air-raid performance against Pittsburgh last week, BC just couldn’t seem to connect on the long balls against Virginia Tech. Last week, Jurkovec tossed a couple of dimes to Zay Flowers on the run, one which went for 44 yards and the other which went for a staggering 77 yards. But when the Eagles got to Blacksburg, the deep ball connection disappeared. The combination of VT’s stout pass rush—which sacked Jurkovec once—and a lockdown secondary kept BC from hitting explosive plays in the air. The Hokies’ secondary notched six pass breakups and two interceptions on the night. The Eagles notched their longest completion of the night on a 43-yard pass to Jaelen Gill. Other than that, BC, which had previously found a weapon in Jurkovec’s cannon of an arm, struggled immensely as Jurkovec threw into tight coverage deep down field.

As much as BC struggled with explosive plays, the Hokies thrived. On the back of running back Khalil Herbert and quarterback Hendon Hooker, VT drove daggers into BC’s secondary on the ground all night long. Hooker, who kept the ball 18 times for 166 yards—making the quarterback the team’s leading rusher—averaged 9.1 yards per rush, including a long of 31 yards. Herbert followed close behind with an average of 7.9 yards per carry on 18 touches for 146 yards. The highlight of the night for Herbert was a 57-yard dash midway through the third quarter.

Through the first half of the game, Virginia Tech averaged a staggering nine yards per play, and by the final whistle, the Hokies were collecting 8.23 yards per play. BC, on the other hand, averaged just over five yards per play with very few explosive plays all game long.

Though BC has spent the early part of the season trying to erase its bad habits from last season, its biggest nightmare from last season returned against Virginia Tech. In a 2019 matchup that the Eagles would rather forget, Herbert, then with Kansas, racked up 187 yards on 11 carries in the Jayhawks’ dismantling of BC. After he graduated last year, Herbert took his talents to Virginia Tech, where he once again ran circles around BC’s defense. In his weekly press conference, BC head coach Jeff Hafley noted the importance of stopping the run, but BC just couldn’t take Herbert down, and as linebacker Max Richardson said in the postgame press conference, it “cost [BC] the game.”

Getting Into the Backfield, But Not Finishing

As was a problem for the Eagles last week, BC’s front seven had no trouble getting into the backfield, but they couldn’t seal the deal. The Eagles had plenty of clear looks at Hooker, but he was elusive all night long. With all of BC’s primary defenders packing the backfield to take Hooker down, when he found a hole, he had plenty of room to run. Midway through the first quarter, the pocket collapsed around Hooker, and a BC defender even had a hand on his jersey, but the quarterback escaped and scrambled to turn a three-yard loss into a three-yard pickup.

Oftentimes, Hooker’s elusiveness was more a result of trickery in the backfield than just his pure speed, causing confusion among BC defenders and allowing him to take a wide open hole with little pressure. Just a few plays before that near-miss from BC, Hooker faked a jet sweep to Tré Turner, which sent the defense the wrong way, and Hooker took the hole for 30 yards.