Home » Telegdy: The Show Must Go On
Arts, Column

Telegdy: The Show Must Go On

I have a confession to make. I am … a theatre kid. I guess now I’m actually a theatre adult. Anyway, now that I’ve gotten that out of the way, I have another confession. Theatre sucks right now! Like most things, no matter how hard we try to adapt them to life with coronavirus, it just feels wrong. Theatre reflects life, and life right now is strange. Just as most of us are living half on Zoom and almost always masked, so is theatre. In the coronavirus era, three types of theatre have emerged: Zoom performances, filmed performances, and movies of live showings.

I imagine Zoom is everyone’s least favorite medium. My personal beef with Zoom theatre stems from my designer side. I mainly focus on stage design, but I also do stage management, directing, and playwriting. Zoom theatre still needs actors, managers, directors, and playwrights, but what Zoom theatre really lacks is design. Zoom is ugly—it lacks dimension, it literally confines actors to a box. Unsurprisingly, it’s hard to design a set when there is no stage to speak of. When scaling down productions to work over Zoom, design is the first thing to go. Lighting and set design just don’t work very well virtually, and it’s expensive and time consuming. Even though design is an integral part of theatre, productions decide they don’t need them. At the same time, Zoom allows for live performances. Even though it differs considerably from traditional theatre, it retains the live element.

Let’s make one thing very clear: movies and plays are not interchangeable. Play directing is not the same as movie directing, but suddenly plays are starting to be filmed. This type of coronavirus theatre doesn’t mean filming a play or musical that already has been running, but producing a play for the sole purpose of filming it. Here, the set becomes a movie set and the focus shifts to making sure it can be filmed. Though this option is more aesthetically pleasing and probably more enjoyable for someone who doesn’t watch a lot of theatre, it’s just not right.

The last variation is filming a play that is already running. Think Hamilton on Disney+. A production like that—one that’s been running for years—gets filmed with a big budget and the best cameras. What’s so great about this type of theatre is that because the show has been running for so long, everyone has a clear idea of what’s important and needs to be filmed. I find this type of filmed theatre truly enjoyable to watch, and it’s the closest thing to sitting in an actual theatre that we will get for a while.

Theatre in the age of COVID presents many new challenges to overcome. Using new technology means modernizing old ways of doing things and rethinking things that just don’t make sense anymore. Another unexpected positive effect of coronavirus theatre is its accessibility—it’s much easier now for individuals who couldn’t see productions before because of disabilities or financial reasons to enjoy the art. Theatre is being shared with a previously unreached audience.

I am so happy to be back at BC creating theatre, or something that resembles it. I suggest that you keep a look out for what’s happening with theatre on campus. It will be strange, but a lot of love and hard work goes into it. What else are you doing? Watch a play, enrich your life. 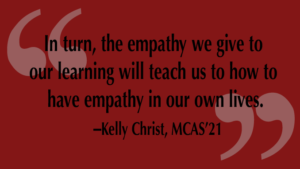