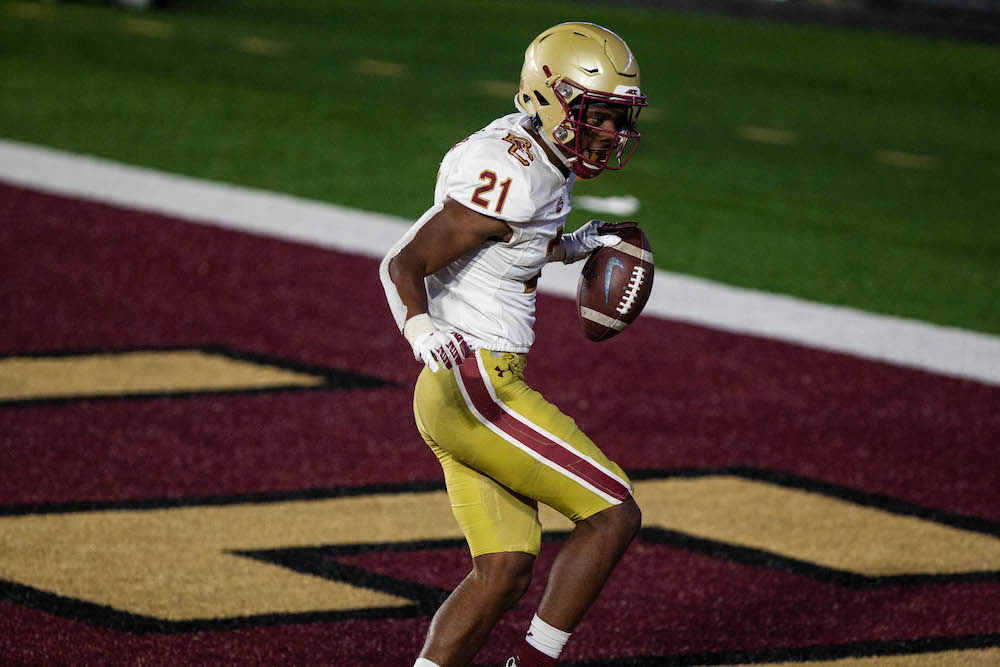 The game will be broadcast on the ACC Network and the ESPN app.

Georgia Tech has been historically dominant in this matchup, leading BC with a 7-2 record all-time—including a 3-1 record in ACC competition—since the teams’ first matchup in 1972. These cross-division foes last saw each other in Dublin in 2016. There, the Yellow Jackets came out with a 17-14 victory after BC gave up a 14-7 fourth-quarter lead. BC’s last victory came in 2007 with a 24-10 triumph in Atlanta, the teams’ first matchup since BC joined the ACC in 2005. The Eagles look to secure their first home win against Georgia Tech in the teams’ fourth meeting in Alumni Stadium.

Though first-year head coach Jeff Hafley has never faced off against the Yellow Jackets, Georgia Tech head coach Geoff Collins last saw the Eagles in 2018, a 45-35 BC win during his two-year stint as the head coach at Temple. Collins served his time at Temple under the leadership of current BC Athletics Director Pat Kraft, who was at the helm of athletics at the Philadelphia university from 2015 until his arrival in Chestnut Hill.

What to Expect from Georgia Tech:

Coming off a 73-7 catastrophe against No. 1 Clemson, the Yellow Jackets are looking to regain some momentum. After responding to Clemson early in the first quarter with a 59-yard touchdown pass from true freshman Jeff Sims to redshirt senior Jalen Camps—GT’s sole touchdown in the game—Georgia Tech had no luck on the offensive end. Though the 66-point romp may stain the record books, Collins remained optimistic during Wednesday’s press conference and said he hopes to use the Clemson game as a learning experience.

GT will look to Sims to run the offense on Saturday. The freshman has passed for 1,025 yards with a 53.8 percent completion rate on the season, totaling a career high of 277 passing yards in his debut on Sept. 12 at Florida State. Though it’s his first year in Atlanta, Collins and the team will look to Sims to be a leader on the field. In Wednesday’s press conference, Yellow Jacket offensive coordinator Dave Patenaude said he hopes to see sophomore wide receiver Ahmarean Brown get more touches on the ball. Running back Jahmyr Gibbs is a threat to BC’s defense as well, leading the team in rushing yards with 299 on the season.

Georgia Tech’s greatest challenge will be preventing turnovers against a BC defense that has shown an astute ability to capitalize on them. Sims will have to sharpen up his game after throwing nine interceptions between the last five games in order to stop BC from scoring off errors.

Georgia Tech can’t be sloppy if it wants to stop the dynamic duo of Phil Jurkovec and Hunter Long. Sloppy games, such as the Yellow Jackets’ loss to Syracuse earlier this season in which they gave up five turnovers and 15 penalties, won’t cut it against Jurkovec’s top-tier passing game.

With both teams coming off bad losses, whoever can learn from their mistakes and sharpen up last week’s sloppiness will take the upperhand in this bout. If Jurkovec can continue his impeccable passing game, the Yellow Jackets will have their work cut out for them. BC remains a narrow favorite, but if it doesn’t tighten things up, Georgia Tech stands a chance.

Correction (10/22/20, 10:27 p.m.): The original version of this story stated that the date of the matchup between BC and Georgia Tech was Oct. 4. This article has been updated with the correct date.