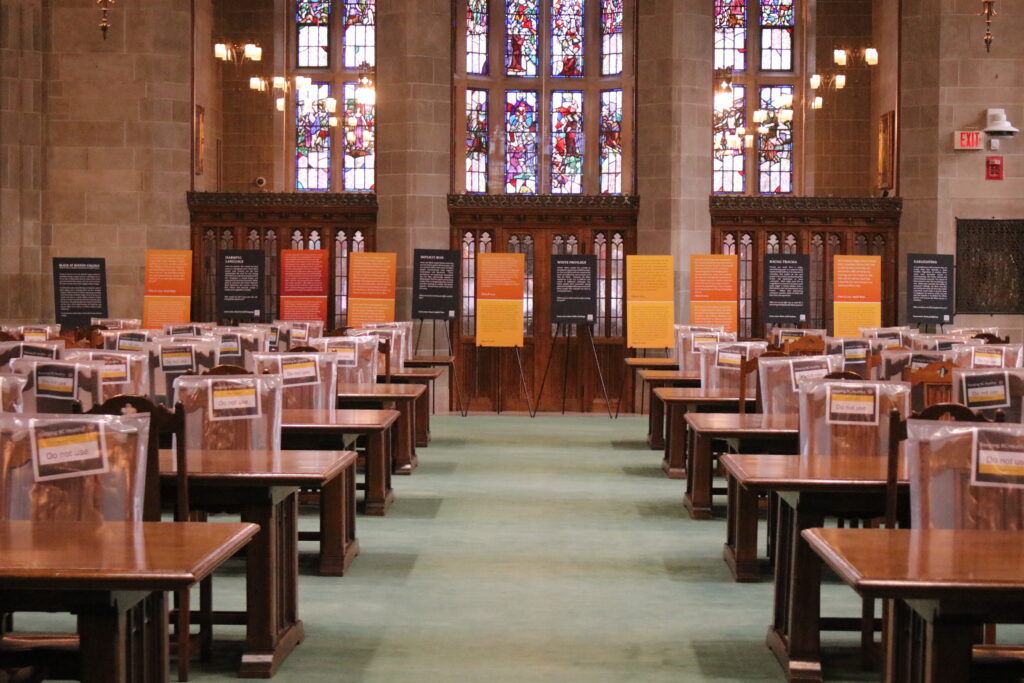 In the wake of the racial justice protests that erupted over the summer, the libraries at Boston College have addressed the current climate in a variety of ways. They have clarified now ubiquitous phrases like “defund the police” and created virtual book displays on racial inequality. But by far their most ambitious and visible project yet has been a simultaneous exhibit across all the libraries—the first of its kind—of posts from the Instagram account @blackatbostoncollege.

The @blackatbostoncollege account shares anonymous stories from Black students and alumni describing their experiences with racism at BC. The account’s Instagram bio states that it is “a space to uplift and share the voices, stories, and struggles of Black community members” of BC.

When the BC Libraries found out about the account, they set out to amplify these stories further, Associate University Librarian for Public Services Scott Britton said.

The result is the display of around 130 posts across all the libraries—including O’Neill Library, Bapst Library, and the BC Law Library. The exhibit, which has been running since September, will be up through the end of the month.

Rodrigo Castro, head librarian for access services, emphasized that the purpose of the exhibit is to simply communicate the stories of the original posts, not to use them as an educational tool.

“As a minority, one of the most stressful situations is that minorities or the experiences of minorities are used to teach dominant culture about equity, diversity and inclusion,” Castro said. “And when that happens, as a minority you feel singled out, you feel tokenized. We wanted to convey what those posts convey, without any kind of mediation.”

While planning for the exhibit, the library staff also faced the question of whether to fact check the anonymous stories. They ultimately decided that it would not be right to question the honesty of the submissions. When posts mentioned names or described people who are easily identifiable, the libraries opted to redact those parts.

“One role of the libraries is to represent viewpoints that are unfiltered,” Britton said. “If you think of it almost as a primary document, an original source, that’s the kind of information we often like to present and have people draw their own conclusions.”

In keeping with the libraries’ goal of maintaining the original form of the posts as faithfully as possible, the posts look very similar to their online counterparts, with simple backgrounds of black, yellow, and orange.

Still, there is a difference between seeing the posts on a phone or computer screen and encountering them in person, Castro said. Social media is ephemeral, so there is value in recreating the posts in a more tangible and permanent way.

When asked what he hopes students take away from the exhibit, Castro mentioned the immediacy of racism at BC.

“When we talk about racial injustice, it’s not something that happens somewhere else, but also here in your own spaces, in your own institution,” Castro said.

black at boston college
Notebook: The Return of the Run Game Electrifies BC’s Offense
Striking Visuals are Not Enough to Redeem ‘Rebecca’