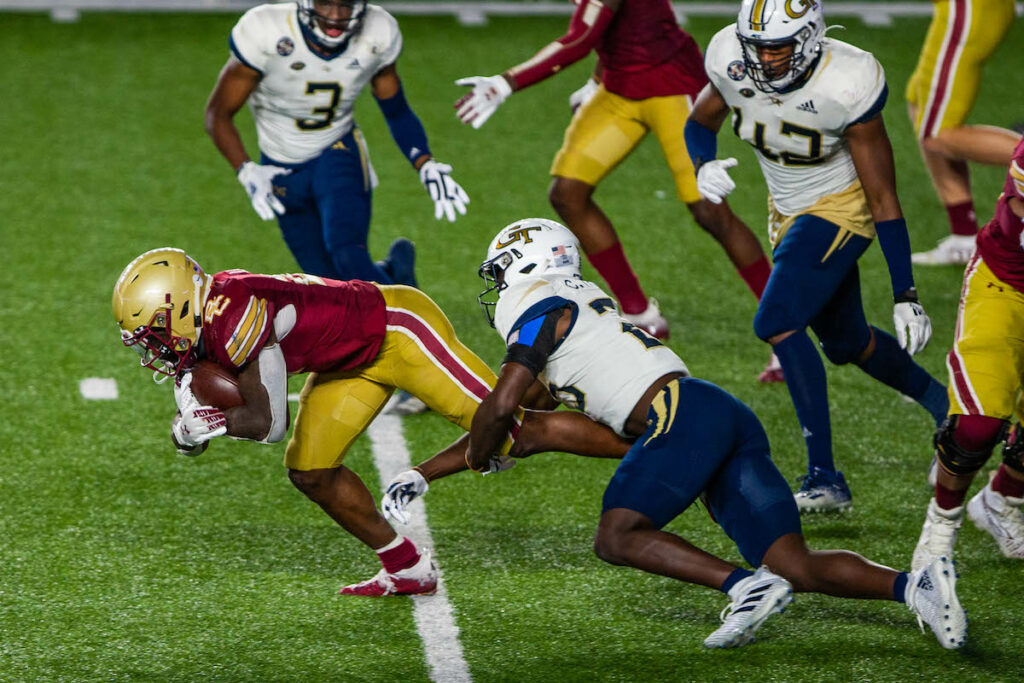 Notebook: The Return of the Run Game Electrifies BC’s Offense

Coming off a deflating 40-14 loss to Virginia Tech down in Blacksburg last Saturday, Boston College football (4-2, 3-2 Atlantic Coast) was looking to get back on track at home against Georgia Tech (2-4, 2-3). Coming into the day as just 3.5-point favorites, the Eagles defied the oddsmakers in this one, dominating the Yellow Jackets 48-27. Here are some key takeaways from the blowout victory:

BC Finally Establishes the Run Game

Coming into this season, fans had high expectations for the Eagles’ rushing attack despite the departure of BC’s all-time leading rusher AJ Dillon, who is currently playing in the NFL for the Green Bay Packers. The main reason for these high expectations was last season’s success of running back David Bailey, who impressed as a backup to Dillon. Even playing second fiddle, Bailey had 877 rushing yards and seven rushing touchdowns in a limited role a season ago. With Bailey as the lead back this year, though, the run game has been the biggest weakness of the Eagles’ explosive offense. BC’s backfield averaged a meager 66.6 rushing yards per game coming into Saturday’s tilt with Georgia Tech.

But something clicked on Saturday, and the Eagles exploded in the run game. They tallied 264 yards on the ground, by far their most in a game this season. In his best game of the season, Bailey totaled 85 yards and two touchdowns on only 13 carries. Bailey was a standout on Saturday, but the improved rushing attack was a full-team effort. Quarterback Phil Jurkovec led the team with 94 rushing yards, while running back Travis Levy added 60 yards on a team-leading 19 carries. An active rushing attack took some pressure off the young quarterback, whom the Eagles have relied on heavily over the first five games. Having a strong rushing attack to complement Jurkovec and the receiving corps will be a key factor not only for the Eagles’ game next week against No. 1 Clemson, but for the rest of the season as well. BC also awaits the return of second-year running back Pat Garwo, who missed Saturday’s game due to injury. In his postgame press conference, head coach Jeff Hafley said he was greatly impressed with the run game on Saturday and expects it to continue in the future.

Last week at Virginia Tech, the Eagles turned the ball over five times, with three lost fumbles and two interceptions.  Winning a football game while turning the ball over five times is an impossible task, as Jurkovec said after last week’s contest. Saturday’s game was a completely different story. The Eagles forced three Yellow Jacket turnovers while committing none of their own. BC recovered two fumbles and picked off Georgia Tech quarterback Jeff Sims once.

The biggest defensive play of the day came early in the second quarter. Defensive back Mike Palmer recovered a GT fumble and took it 33 yards to the house for a touchdown, extending the BC lead to 24-0. In the third quarter, Jahmin Muse went up for a pick at GT’s 12-yard line, setting up a quick score for the Eagles. Marcus Valdez also jumped on a loose ball early on in the game after Sims bobbled the snap. If the Eagles want to have a fighting chance next week at Clemson, winning the turnover battle is a must.

Even though the Eagles had struggled to run the ball prior to this game, the Jurkovec-led aerial attack has been lethal. Jurkovec quickly developed chemistry with his tight end Hunter Long, who led all tight ends in the country in receiving yards entering Saturday’s game, and wide receiver Zay Flowers, who scored his fifth touchdown of the season against Georgia Tech. The Eagles have shown that they have a deep bench of pass catchers, which also includes Jaelen Gill, Spencer Witter, and Jehlani Galloway. On Saturday, junior CJ Lewis emerged as BC’s leading receiver, catching four passes for 58 yards and two touchdowns. After such a dominant performance, Lewis proved he’s earned a spot on Jurkovec’s list of reliable targets.

Despite the big victory, penalties continue to be a lingering issue for Hafley and the Eagles.  Against Georgia Tech, the Eagles committed 10 penalties and gave up 102 yards as a result of them. Back in the Eagles’ Week 3 loss to North Carolina, unsportsmanlike conduct penalties led to a UNC field goal that forced the Eagles to—unsuccessfully—attempt a two-point conversion at the end of the game.

In Saturday’s game, cornerback Josh DeBerry was flagged for a targeting penalty, ejecting him from the game early on. DeBerry has been having a stellar campaign this season, so losing him for a majority of the game was a major loss for the Eagles’ secondary. The Eagles earned three unsportsmanlike conduct penalties on their celebration in the end zone following Palmer’s scoop-and-score. Even though the Eagles still earned the victory, the number of penalties needs to go down in future weeks. There will be no room for error next week in Death Valley. The Eagles cannot take dumb penalties and give second opportunities to Heisman frontrunner Trevor Lawrence and the most dominant team in college football.