Newton Mayor Ruthanne Fuller said that 35,502 Newton residents requested a mail-in ballot this year, a sharp increase from the 2,000 casted in the 2016 election, according to David Olson, Newton’s city clerk.

Fuller said that as of noon on Thursday 29,611 Newton residents voted by mail.

To keep up with the increase in ballots, Olson hired more staff and is increasing work hours as Election Day approaches.

“We have hired staff, we’ve been doing training, and we’ve been keeping on top of things,” Olson said. “We are working every day from 8:30 a.m. to 9 p.m. Monday through Friday, and starting this weekend, we will be in on the weekends as well.”

Ballots that arrive through the mail will be unopened until the weekend before the election. The ballots will then be processed through advance tabulation.

“Those 35,000 ballots will be processed through a tabulating machine before the election happens, so we won’t know the results until election night,” Olson said.

Olson said that because ballots are processed early, voters who have already voted by mail will have their names checked off in the voter lists. People will be unable to vote in-person if they have already mailed in a ballot.

Olson said that there are multiple ways for people to vote this year, making it easier for people and taking into consideration those who have concerns about COVID-19.

“You can do this completely remotely with a mail-in ballot or you can pick your time to come and vote in person at the library or you can show up on Election Day,” Olson said.

Early in-person voting began on Oct. 17 and continues through Oct. 30 at the Newton Public Library.

Although directions on how to properly fill out and submit a mail-in ballot are included in every envelope, Olson is concerned that there are still people who will miss a step in the directions. This could lead to the ballot being considered ineligible, meaning that it will not be counted in the election.

“One of the key things is that when they have returned [the ballot] to us, they have to sign the envelope that it comes in to say that they are the ones who are submitting it,” Olson said. “And if that signature is not on there, then we have to contact the voter and give them options about what they want to do.”

Some of these options include sending a new mail-in ballot, coming in to find the envelope, or just voting in-person at early voting.

Olson recommends that people submit their mail in ballots as soon as possible and avoid waiting until the deadline.

“We do encourage people that once we have mailed their ballots to them, they fill it out,” he said. “Have it ready to get it back to us.”

Olson also explained that the drop box at Newton City Hall has been receiving numerous ballots from residents and is an easy way to make sure your ballot will be counted.

“But as we get closer if people have waited to send their ballots back, we would encourage them to bring it down and drop it in the drop box and take the chance of it not getting back to us in time,” he said.

Newton resident Jonathon Swersey voted by mail for the first time. He chose to vote by mail for health and safety reasons.

“I think it also had some other benefits. We have two young daughters and it let us talk through politics with them a bit,” Swersey said.

After filling out his ballot, Swersey dropped it off in the collection box outside of Newton City Hall. Swersey also said that it was helpful to be able to track his ballot after dropping it off.

“When you go to the polling place, you take your kids with you there but it always feels more rushed. This gave us a chance to engage more deeply with our children,” Swersey said. “It just felt like a great thing to be doing with them.” 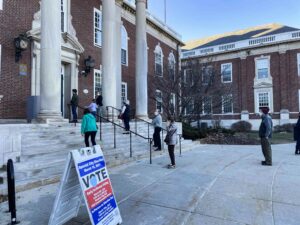 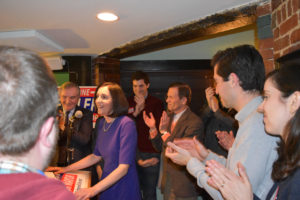