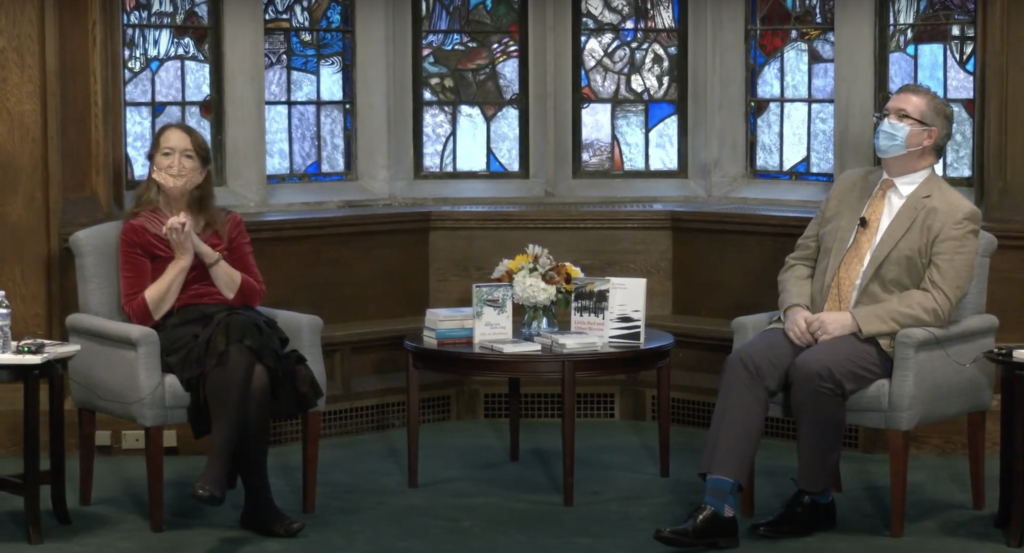 Éilís Ní Dhuibhne is no stranger to acclaim. The renowned writer, academic, university instructor, recipient of countless awards, and this year’s Burns Visiting Scholar in Irish studies received an outpouring of support at the virtual launch—the first of its kind at Boston College—for her seventh collection of short stories, ​Little Red and Other Stories​, released on Kindle on Oct. 22 in the United States.

With users chiming in from all over the globe, the online comments section of the launch was overwhelmed by glowing responses to not only Ni Dhuibhne’s work but to her presence as well. In a short video message played at the beginning of the launch, Ambassador of Ireland to the United States Daniel Mulhall said that “Éilís is one of Ireland’s finest writers.”

In a brief reading from “Lemon Curd,” one of the short stories included in ​Little Red and Other Stories​, Ní Dhuibhne examines the trip of a woman from Dublin (Ní Dhuibhne’s place of residence) and her experience dealing with toxic masculinity. In another reading from a different story in the collection, “Nadia’s Cake,” two older men ogle a young woman one morning during her stay in a Bulgarian town.

Ní Dhuibhne examines male entitlement in society in her work. The language in both of these passages captures the predatorial nature of men “in the wild,” as she described them, while bringing awareness to the everyday situations women are subject to as a result of their sex.

Ní Dhuibhne is also editing and contributing to another collection of work, ​Look! It’s a Woman Writer​, an upcoming anthology of 21 essays written solely by Irish women writers. The anthology will focus on exhibiting Irish literary feminism from 1970 to 2020.

At the event, she expanded on her feelings regarding the presence of women in the Irish literary canon, both now and in the past, including Irish writer Sally Rooney, who wrote the fiction books Conversations With Friends and Normal People.

“I thought it was a good time [for this collection] because we are very conscious of a kind of ‘new wave’ of young women writers in Ireland, which is fantastic … you know, the ‘Sally Rooney Phenomenon,’ just to use shorthand,” Ní Dhuibhne said.

She went on to explain how the new wave of feminism in literature first took root in the ʼ80s.

“We were discovering feminism,” Ní Dhuibhne said. “We were saying the woman’s voice must be heard.”

Ní Dhuibhne’s work has also been translated into several languages, carving out an increasingly prominent place for Irish female writers.

Screenshot by Grace McPhee / For The Heights