Home » Notebook: Eagles Prove They Can Contend With Nation’s Best 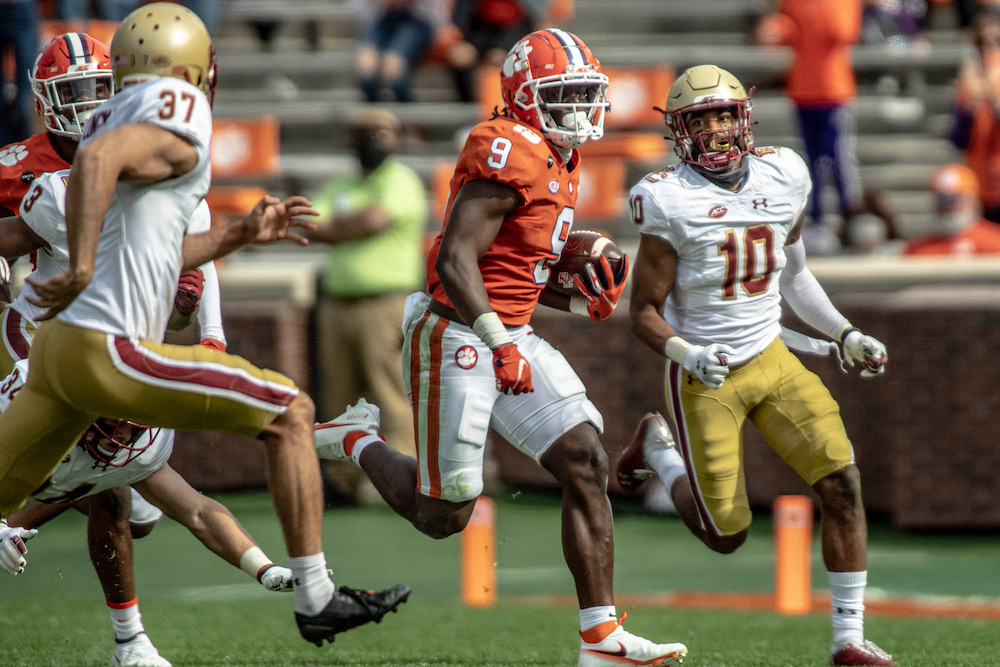 Notebook: Eagles Prove They Can Contend With Nation’s Best

Boston College football gave No. 1 Clemson quite the scare in a Halloween showdown on Saturday. Clemson fans watching the game were watching more of a horror movie than a football game, as unranked BC racked up an 18-point lead in the first half. Clemson (7-0, 6-0 Atlantic Coast), which had previously run away with every game it had played this season, mounted a furious second-half comeback and sent BC (4-3, 3-3) packing with more tricks than treats.

A Glimpse Into the Future

With star quarterback Trevor Lawrence sidelined after a positive COVID-19 test, D.J. Uiagalelei had to step in for the Tigers. His 342-yard, two-touchdown breakout performance was more than enough to show that he has the chops to take over next year, as Lawrence is projected to go in the first round of the 2021 NFL Draft. On the BC side of the ball, Phil Jurkovec still has three years of eligibility left after this season, so next year’s ACC matchup between BC and Clemson will likely look very similar. That’s not to mention the fact that BC has the ability to return its entire receiving corps as well. CJ Lewis, Zay Flowers, Hunter Long, Jaelen Gill, and Jehlani Galloway—all of Jurkovec’s targets on Saturday—all have at least another year of eligibility, as do many of Clemson’s top receivers. As a result of the two teams’ youth, Saturday’s matchup is likely a forecast of how the game will look next year. BC, on the rise under first-year head coach Jeff Hafley, showed that it can compete with a top-tier program like Clemson, and Clemson showed that it can still operate without its star under center.

Stopping Etienne on the Ground but Not through the Air

Clemson won’t return all of its offense from Saturday next year, however. Running back Travis Etienne, the Tigers’ second Heisman candidate, is also projected to go in the first round of this year’s NFL Draft. As a result of his offensive firepower, Hafley wrote atop his call sheet “stop number nine,” referring to the dynamic back. BC did all it could, but Etienne still found his way to elude the Eagles’ defense all game long. Etienne is averaging 86 yards per game, and he finished Saturday’s game just shy of that mark with 84 yards on the ground. But where he was most dominant was in yards after the catch. Entering the game against BC, Etienne was averaging 49 yards per game through the air. But against the Eagles, Etienne found open space constantly, racking up 140 receiving yards, most of which came in yards after the catch. As much as BC looked prepared for him on the ground, the Eagles didn’t seem to anticipate Etienne’s potential as a versatile, pass-catching back.

Penalties Haunt the Eagles Once Again

Week after week, BC has struggled to limit its penalties. The Eagles have a habit of giving up major penalties at crucial junctions in the game, and against Clemson, it was no different. The penalties were most obvious as the third quarter wound down and BC found itself behind for the first time all game. Down 28-26, Clemson forced a stop on third down, and Grant Carlson came in to punt it away. Carlson, who has been a weapon all season long, booted it down inside Clemson’s one-yard line, pinning the Tigers deep in their own territory to start the drive. But an illegal shift when BC’s gunner wasn’t set forced Carlson to come out and attempt it again from five yards back. Again, the ball landed inside the 2-yard line, but a holding call on Max Richardson brought Carlson back out. Fifteen yards back from where he took his first punt, he hit it once more, and if not for a Clemson penalty, the Tigers would have begun the drive at the 20-yard line instead of the original 1-yard line. That drive resulted in Clemson’s go-ahead touchdown, putting the Tigers up 34-28.

Facing the No. 1 team in the country, giving up free yardage is a surefire way to lose a game. BC committed 11 penalties, which accounted for 92 of Clemson’s yards. The Tigers weren’t much cleaner, though, giving up nine penalties for 82 yards.

BC fans are all undoubtedly familiar with the Eagles’ history of poor clock management. But it seems as though such struggles are a thing of the past. The infamous 3-0 loss to Wake Forest in 2015 is a prime example of how far BC has come in terms of clock management.

Unlike in previous years, Hafley has shown an astute awareness of how long any given drive should take based on how much time has elapsed. He said in his postgame press conference that he’s constantly checking the clock to inform how his staff calls the plays, and it paid off on Saturday. Ahead by 14 late in the second quarter, BC slowly chipped away at Clemson’s defense, resulting in a seven-and-a-half-minute, 15-play, 75-yard touchdown drive. By eating away the clock late in the second, BC forced Clemson to complete its final drive of the half in under a minute, resulting in BC holding the Tigers to just a field goal right before halftime.

BC Can Compete with Anyone, but This Isn’t a Moral Victory

Before Saturday, many fans would’ve said that BC had no chance against the top team in the country. Many did, in fact, as nearly every news outlet predicted a double-digit win for the Tigers. But instead of a blowout in favor of the Tigers, BC showed that it can compete with the “top dogs,” as Lewis put it during the postgame press conference. Saturday’s game was a departure from the battering that Eagles fans are used to seeing against Clemson, as BC has scored just seven points in all three of its last meetings with the Tigers. And even though Clemson seems untouchable at the top of the national rankings for eight straight weeks, BC put up a fight. The Eagles were the first team to lead Clemson in a regular-season game since September of 2019, and at one point, they led by as much as 18.

That lead comes with a caveat, though, as the Eagles watched it slip away in the second half. BC struggled to finish what looked like a runaway victory, and though they competed for the full 60 minutes, Hafley has been adamant all season that there is no such thing as moral victories. His team has lots to be proud of, but a loss is a loss, especially after holding a double-digit lead for most of the first half.