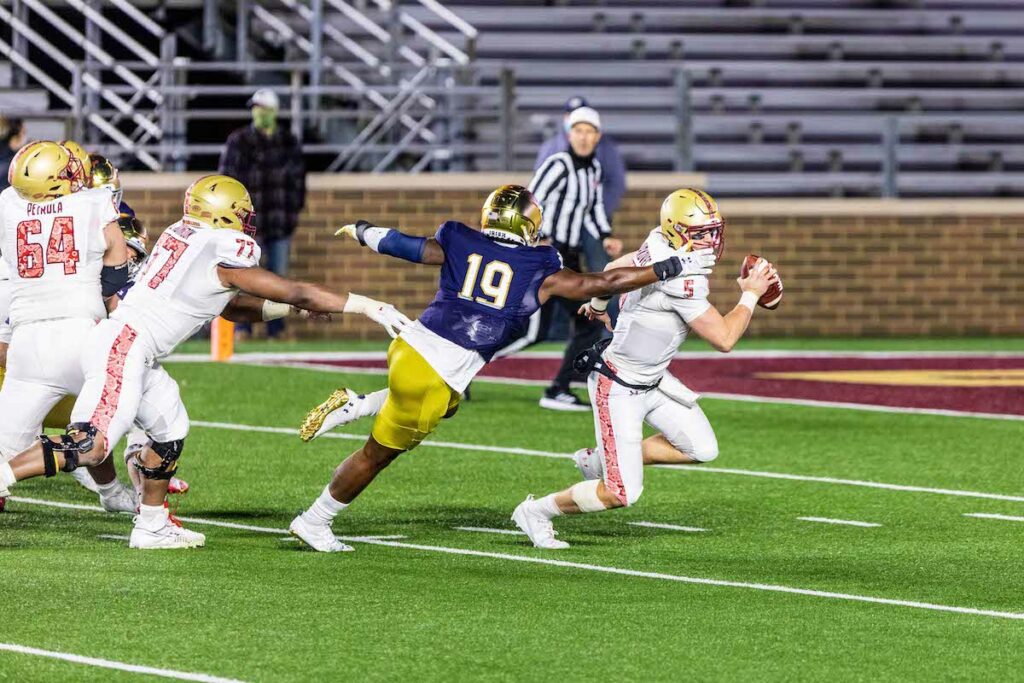 Riding high off a victory against Syracuse last Saturday, Boston College football was poised to take on its star quarterback’s former team, No. 2 Notre Dame. And yet, while the determined Eagles (5-4, 4-4 Atlantic Coast) showed brief flashes of confidence and preparedness to take on another top-five team, head coach Jeff Hafley’s squad couldn’t pull through the win, ultimately falling to the Irish (8-0, 7-0) in a whimper rather than a shout.

If there’s one thing Notre Dame quarterback Ian Book is good at, it’s extending the play and finding an opening that’ll catch the opposition off guard. After the two teams went toe-to-toe in the first quarter, Book seemed to step up his game, juking BC defenders in order to give himself the space to make a solid play out of a sticky situation.

In the final drive of the second quarter, however, it was the entire Irish offense that kept the Eagles’ defenders on their toes as they quickly moved from one play to the next to move down the field before the clock ran out. Book himself showed off his speed, sprinting through an opening in BC’s defensive front to gain a first and goal for the Irish, a play that would lead to a touchdown by Ben Skowronek.

Throughout the contest, Book proved to be BC’s kryptonite, always finding the one uncovered spot on the field to book it and make a run for the end zone. The QB seemed to be a step ahead of the Eagles at all times, easily making the determination to throw it or run it down the middle himself, leaving the Eagles’ defensive line scrambling to keep up.

So far this season, the Eagles have made a name for themselves in their takeaway game. Entering the afternoon’s matchup with the Irish, BC’s defense had secured 14 takeaways: seven interceptions and seven recovered fumbles. The Eagles continued this trend as the defensive line recovered three Irish fumbles across the first three quarters.

On the first play after the Eagles tallied their first touchdown of the afternoon, BC’s defenders recovered a fumble from Book to give themselves another shot to extend their lead. And yet, possession was quickly turned back to the Irish as Phil Jurkovec failed to clear a first down, dumping the ball for a loss of yardage on third down.

But while BC defenders were working and grinding to take possession away from the dominant Irish offense, Jurkovec was struggling to keep the ball in BC’s hands. Immediately after the Eagles gained possession from a fumble recovered by Max Richardson, Jurkovec threw an interception, giving the Irish an unnecessary advantage and, ultimately, another touchdown conversion.

Many of the Eagles’ offensive troubles stemmed not from their own plays but their lack of a response to the powerhouse that is Notre Dame’s defense. The Irish defenders made quick work of the Eagles’ guards, and converged on Jurkovec, limiting his chances to get rid of the ball and put it neatly into the hands of one of his receivers.

With the collapsed pocket, Jurkovec had even less time than usual and was often forced to roll out or keep the ball himself in order to find an opening. Even then, not every receiver was as successful as Jaelen Gill or Zay Flowers in perfectly reading the plays to secure the ball and keep the Eagles’ drive moving forward. More often than not, this scenario played out with an incompletion that left BC sweating and desperate during second and third downs.

While Book was easily completing passes with his receivers to advance down the field, going 20 for 27, Jurkovec was cracking under the pressure of playing against his former team. The Eagles’ quarterback had been struggling the past few games, especially against Syracuse, as he suffered a separated shoulder the week prior. While BC had pulled out a win in that game, Jurkovec was overthrowing important passes that would have prevented such a close game. And while his receivers, most notably Flowers and Gill, were able to pull off some incredible acrobatic catches, Jurkovec’s game still didn’t look sharp.
While the Irish edge rush was frequently closing in on Jurkovec, that alone was not the cause of his incomplete throws. Jurkovec’s desperation to get rid of the ball quickly proved to be a fault during the contest, as his low throws often resulted in incompletions or near interceptions by the Irish defenders. While Book only missed seven of his 27 throws, Jurkovec only completed 18 of his 40 passes, far below his average of 21.11 complete passes per game.