Sir Elton John released his newest album Elton: Jewel Box, an eight-disc album, just short of nine hours in length, which includes rarities from the late ’60s and early ’70s, lesser-known B-side tracks, and some of John’s favorite album cuts. Some songs were previously released in some form or another and others were left unheard by the general public—that is until now.

The album consists of an incredibly diverse collection of songs, ranging from soulful ballads to the spirited rock hits for which he is known and adored. John takes listeners on a journey through the decades. The earlier songs allude to what is to come from his future music with lyricist partner Bernie Taupin. It is evident they possessed a raw talent from the beginning of their careers, and their creativity and musical genius has been unmatched ever since.

Making the album was a reflective process that inspired a lot of nostalgia for the pair. Some of the songs they said they hadn’t heard in 50 years.

“To delve back through every period of my career in such detail for Jewel Box has been an absolute pleasure,” John said regarding the making of his album. “Hearing these long-lost tracks again, I find it hard to comprehend just how prolific Bernie and I were during the early days …. I always want to push forward with everything I do and look to the future, but having time during lockdown to take stock and pull these moments from my memory from each era has been a joy.”

The first two discs are the “Deep Cuts,” which feature “Where To Now St. Peter?,” “We All Fall In Love Sometimes,” “Blues For Baby And Me,” and “All That I’m Allowed (I’m Thankful).” These discs are an assemblage of many of his slower, personal songs that showcase his enduring relationship with the black and white keys of the piano.

Next are the three discs entitled “Rarities.” A compilation of piano and guitar demos, these tracks clearly don’t have the same acoustic quality or dynamic musical backings as the other discs. Most notably, though, is the demo of “Scarecrow”—John and Taupin’s very first song together. The song is a tribute to their partnership which dates all the way back to 1967. Since then, Taupin has written the lyrics while John creates the melodies.

The two discs housing the B-side tracks include singles he’s released dating back to 1976. “Can’t Get Over Getting Over Losing You” and “A Simple Man” stand out. It is hard not to recognize some of the parallels between many of these less familiar songs and John’s chart-topping hits.

The single and final disc, intimately named “And This Is Me … ,” is the shortest disc of the album. It offers gems like “Amazes Me,” “Elton’s Song,” and “Sartorial Eloquence” as well as remastered versions of fan favorites “Border Song” and “Philadelphia Freedom.” John concludes with “(I’m Gonna) Love Me Again,” an upbeat tune that was featured in his biopic Rocketman.

John chose a fitting title, as it surely is a jewel of an album. The sheer number of songs on the album is astounding as is the audio quality of most of the tracks themselves. Listeners can hear the evolution of John and Taupin’s music and how they have both grown immensely as artists over the decades. This leaves fans to ask: What is next for the Rocketman? Is this the artist’s musical collection in its entirety, or will John dig into his musical vaults once again and bless fans with another album?

John unfortunately had to postpone part of his soldout Farewell Yellow Brick Road Tour until at least next summer. This hasn’t placed a halt on his musical inspiration, though. In a recent interview with Rolling Stone Taupin was asked if the musical duo saw any reason not to continue to produce music into their 80s.

“No. Absolutely not,” Taupin said. “None whatsoever. I’m chomping at the bit to do it … I’m probably equally enthusiastic about working now as I was back then.”

No matter what listening mood you are in, the Elton: Jewel Box anthology offers an array of musical experiences that can transport listeners to nostalgic eras. With eight discs and 148 tracks, there is something for everyone. 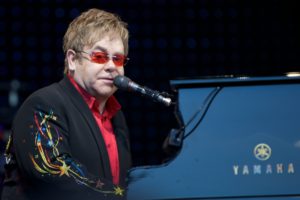