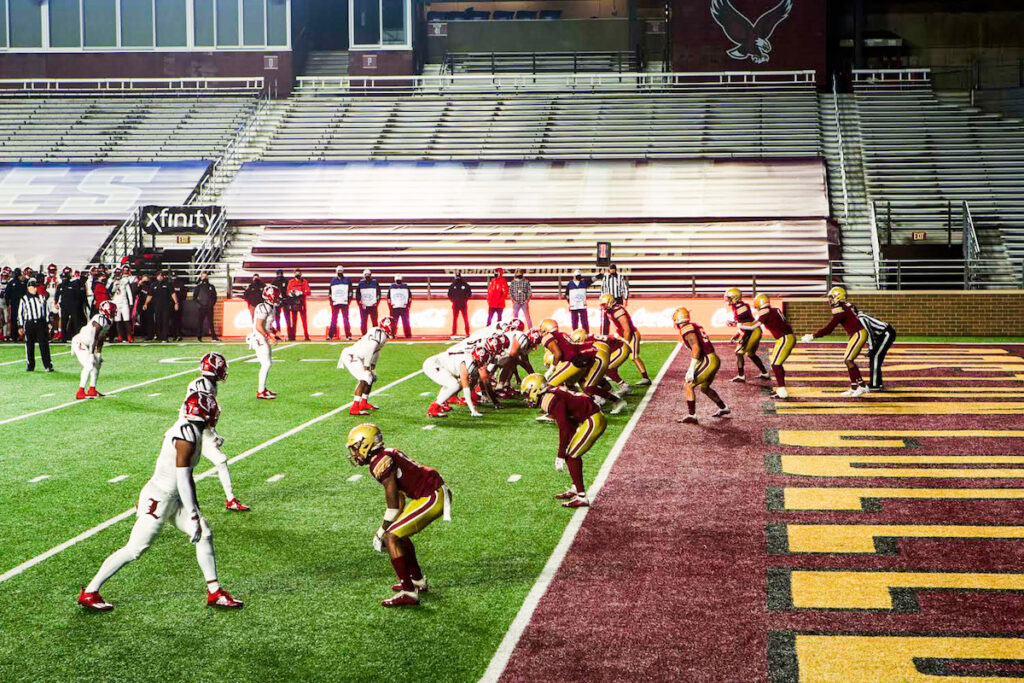 Boston College football’s last two games have been a story of déjà vu. Against Notre Dame two weeks ago, BC seemed poised before the game to pull out a surprise victory in circumstances eerily similar to the Eagles’ famous upset win over the then-No. 1 Irish in 1993.

The déjà vu returned for the Eagles on Saturday against Louisville, this time not due to the factors surrounding the game, but the play on the field. Just like the Eagles’ game against Louisville last season, BC lost its starting quarterback midway through the game to a knee injury and struggled to contain an explosive Louisville offense, particularly on the ground.

Dennis Grosel put on an impressive performance off the bench after Phil Jurkovec went down with a knee injury in the third quarter. The second stringer threw for a pair of touchdowns, plus he broke free for a 44-yard run.

“He’s one of our best leaders: never complains, never says a word,” head coach Jeff Hafley said about Grosel during the postgame press conference. “All he does is prepare. And when his time came, he took the game over.”

The clutch performance was Grosel’s second off the bench this year. He entered the game for one snap against Clemson when Jurkovec was sidelined after a big hit, completing a four-yard pass to Hunter Long on fourth down to keep the Eagles’ hopes alive.

After the Eagles went three-and-out with 3:05 to play in the fourth quarter, Louisville got the ball back on its 30-yard line down by a touchdown. Quarterback Malik Cunningham quickly completed two passes to get the Cardinals near midfield, and Louisville seemed on the cusp of mounting a comeback. The Eagles brought pressure on the next snap, and interior lineman Chibueze Onwuka got his arm in the way of Cunningham’s pass, deflecting the ball into the arms of safety Shitta Sillah.

Sillah’s incredible play was the Eagles’ third forced turnover of the game and gave BC the ball back with the lead and 1:42 to play. Travis Levy ran up the middle three times to close out the game.

Before going down with an injury, Jurkovec shrugged off the accuracy woes that had plagued him late against Clemson and against Notre Dame, rebounding to complete 15 of 19 passes for 203 yards.

His injury came with 6:19 to play in the third quarter. The left side of Louisville’s defensive line brought pressure, forcing Jurkovec into an awkward throwing position as he forced a pass to a tightly covered Levy and fell to the turf holding his knee.

Jurkovec was walking on the sidelines with a slight limp for the rest of the game. Hafley said that he currently has no information as to the severity of the injury.

David Bailey was also sidelined with an injury in the third quarter, prematurely cutting off what had already been a good day on the ground for the running back, as he totaled 53 yards and a pair of touchdowns.

Grosel and Jurkovec’s stellar performances were critical, as BC needed all the offense they could get to match up against Cunningham, a mobile dual-threat quarterback.

Cunningham was a one-man offense for the Cardinals, throwing for 294 yards and adding another 133 with his legs. Time after time, BC’s defensive line closed in on Cunningham only for him to scamper away for a chunk gain. The Eagles only managed a single sack on the game.

“He’s a dynamic player,” Hafley said. “They threw some new stuff at us with him running the ball, and we had him a few times, and he made a bunch of guys miss, and he ran away from a lot of guys.”

Dez Fitzpatrick was Cunningham’s top target through the air, racking up 182 yards including a 69-yard touchdown on a screen pass late in the fourth quarter that brought Louisville back into the game.

Zay Flowers played up to his usual high standard with seven catches for 87 yards. CJ Lewis only had 24 yards but had an incredible one-handed grab for a touchdown off a fade from Grosel.

Lewis also had an astounding one-handed grab against Clemson, but when asked which catch was his favorite, he said he prefers the one against the Cardinals.

“I mean I think a lot of people liked the Clemson one, but I think I liked this one more because it was Senior Day and we got the win,” Lewis said.