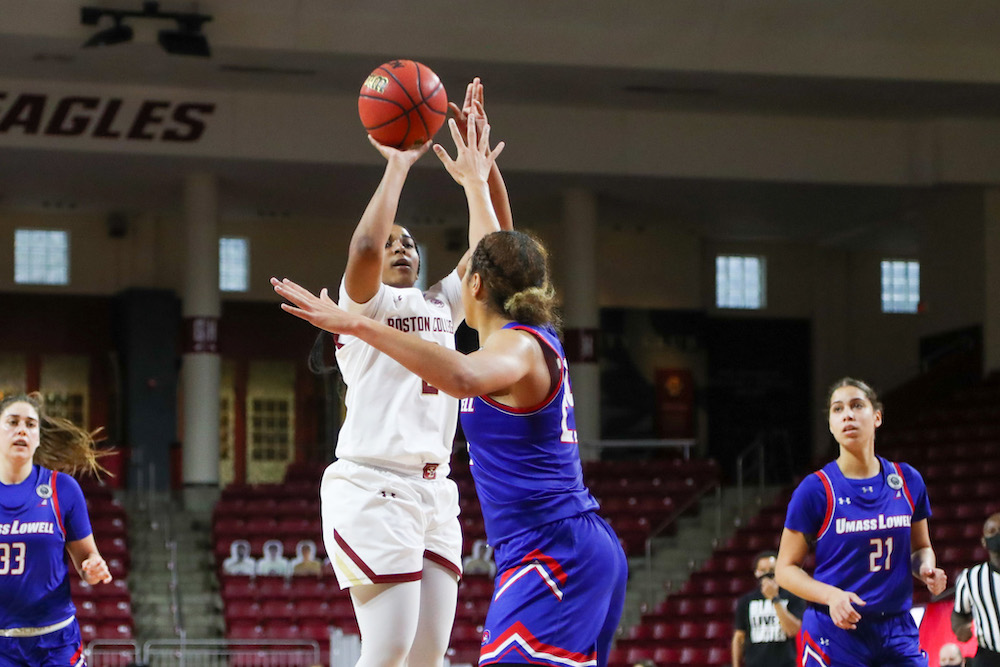 With the Eagles starting practice later than usual due to COVID-19, Boston College women’s basketball needed all the preparation time that it could get ahead of its first ACC clash of the season on Wednesday against Georgia Tech.

While BC (4-0) ostensibly had a matchup against UMass Lowell (0-1) on Sunday afternoon, the game ended up being more like extra practice time, as the Eagles dismantled the River Hawks 88-38 and often looked like they were running drills without an opponent.

The 50-point beatdown even exceeded BC’s dominance of UMass Lowell last season, when the Eagles won 89-46.

Time and time again, the Eagles swiped the ball away from a UMass Lowell player and jumped out in transition, casually carrying the ball up the court and dishing to an open cutter for an easy layup as if they were running a transition passing drill in warm ups.

All in all, the River Hawks committed 30 turnovers, and BC scored 37 points from those opportunities.

The Eagles’ scoring was led by 23 points from freshman guard Kaylah Ivey, who also notched three steals and was frequently the BC player leading the team in transition.

Ivey’s strength on the defensive side of the ball has quickly become clear on the Heights. She recorded five steals in the first game of the season, an 80-44 victory over New Hampshire, and now has 11 on the season.

“I think as [Ivey’s] career goes on here she’s going to be one of the best point guards in the country,” BC head coach Joanna Bernabei-McNamee said in her postgame press conference.

Despite the lopsided final result, BC’s shooters struggled in the opening minutes of the game, and UMass Lowell led 13-9 with 4:14 to play in the first quarter. The Eagles began to finally gather themselves in the final minutes of the first quarter and went into the break with a 16-13 lead after Taylor Soule intercepted a pass and ran the entire length of the floor in four seconds to beat the buzzer.

Soule had a relatively quiet game by her standards, scoring just nine points.

The tremendous play to end the quarter exemplified every element of BC’s dominance on Sunday: aggressive on defense, speedy in transition, and clinical around the basket.

The Eagles’ shooting woes returned at the onset of the second quarter as they missed their first three shots, but they soon flipped a switch, finishing the quarter ahead 42-24 and showing the dominance that would carry them the rest of the way.

The River Hawks seemed incapable of holding onto the ball, alternating between offensive fouls, bad passes, and poor ball handling as they handed the Eagles opportunity after opportunity to get out in transition.

Their struggles only compounded after BC threw in a well-executed full-court press at the end of the half.

Despite the Eagles’ sizable halftime lead, they were still struggling to get shots to fall, particularly from the outside, and actually had a lower field goal percentage than UMass Lowell.

“I tell our team that’s kind of going to be the name of our game: We can’t really rely on made shots to score,” Bernabei-McNamee said. “I love when we can turn great defense into easy offense, which we really didn’t do that at all in the first quarter but then we picked up on that.”

While, as Bernabei-McNamee said, the Eagles may not be able to rely on their shooting, they certainly found that success in the second half, hitting 58 percent of their attempts from the field. The high percentage was not just a result of BC’s easy looks in transition, as the Eagles also shot 43 percent from 3-point range.

Cameron Swartz tallied a 3-pointer as part of her 15-point performance, but it was actually her lack of attempts from the outside that proved the quality of her play on Sunday. While Swartz has shown incredible prowess from behind the arc when she’s shooting well, she too frequently settled for low-percentage looks last year and finished the year shooting just 36 percent from the field.

After starting the year with a poor shooting display against New Hampshire, she has looked like a totally different player over the last couple games, utilizing her crafty ball handling and ability to manipulate space to get to the basket.

Swartz was a key piece of the Eagles’ transition attack that dominated the River Hawks 46-14 in the second half, smoothly cutting to the basket from the wing and receiving passes from Ivey and Marnelle Garraud.

“It’s really nice to finish off a non-conference with a 4-0 record, and I thought convincingly this was a game,” Bernabei-McNamee said. “We had fun playing after that first quarter, kind of showing how we have the ability to push tempo on the offensive end.” 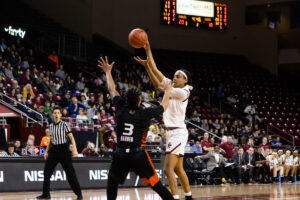