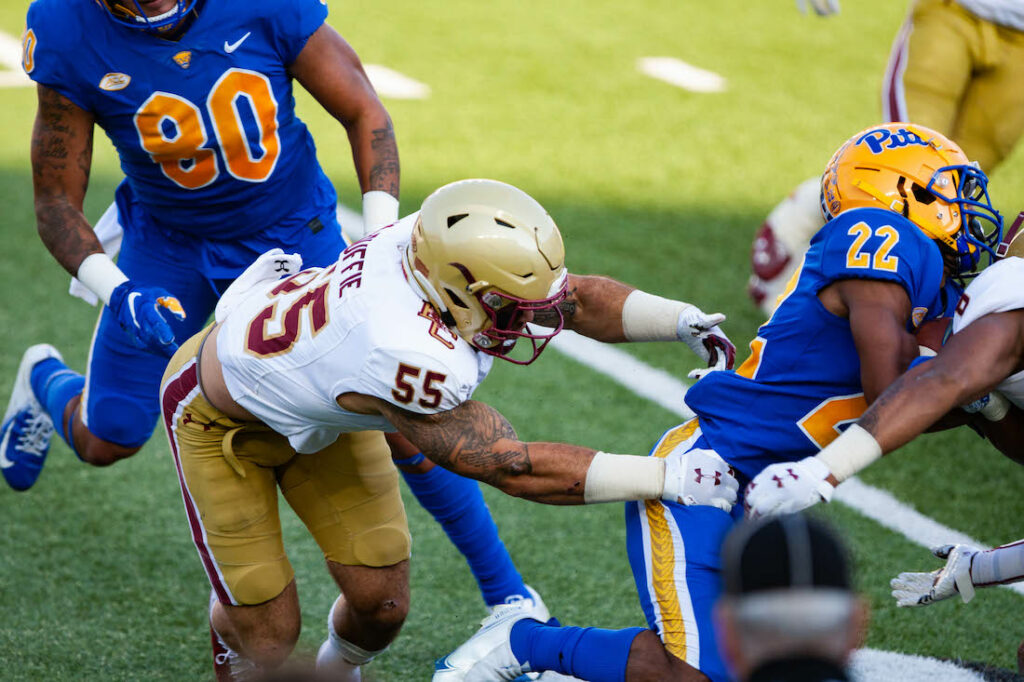 Just one day after losing one of its top offensive weapons to the NFL Draft, Boston College football also has to bid adieu to a staple of its defense for the same reason. On Friday afternoon, linebacker Isaiah McDuffie became the second Eagle to declare for the 2021 NFL Draft.

“Boston College took me in as a 17-year old, then four years later, created a man,” McDuffie said in a press release. “Throughout my time I formed many great relationships that will last a lifetime. I want to say thank you to my teammates, coaches, strength staff, medical staff, equipment staff, and everyone affiliated now and previously with the Boston College program.”

The redshirt junior led BC in tackles this season with 107 total tackles—the most in a single season in his career—including 54 solo tackles. He also recorded three sacks on the year for a total of 24 yards.

“We are excited for Isaiah as he begins the next chapter of his football career and we wish him well,” head coach Jeff Hafley said in the release. “We look forward to watching Isaiah play on Sundays.”

McDuffie performed at his best under pressure this year, recording a career-high of 16 tackles against then-No. 2 Notre Dame.

For McDuffie, who only played four games during the 2019 season after sustaining an injury during spring training that year, 2020 was a bounceback year. After seeing the field sparingly as a freshman, McDuffie broke out as a sophomore, notching 85 tackles—5.5 for loss—and 3.5 sacks. His injury sidelined him for most of the next season, but in the last four games of the year he recorded 30 total tackles.

A three-star recruit out of Bennett High School in Buffalo, N.Y., McDuffie initially committed to Syracuse in 2015 before flipping his decision to BC in the spring of 2016. In the release, McDuffie said that attending BC was the best decision he ever made.

“I fell in love with the game of football from an early age,” McDuffie said. “Growing up playing in the streets with my friends or organized, I always had a football by my side.”

McDuffie finished out his career with 233 total tackles, nearly half of which came this year, 15.5 tackles for loss, and 8.5 sacks.

“I will forever be an Eagle,” McDuffie said. “I’m excited for this journey and can’t wait to see what life has in store.” 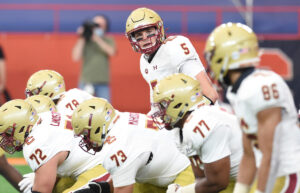