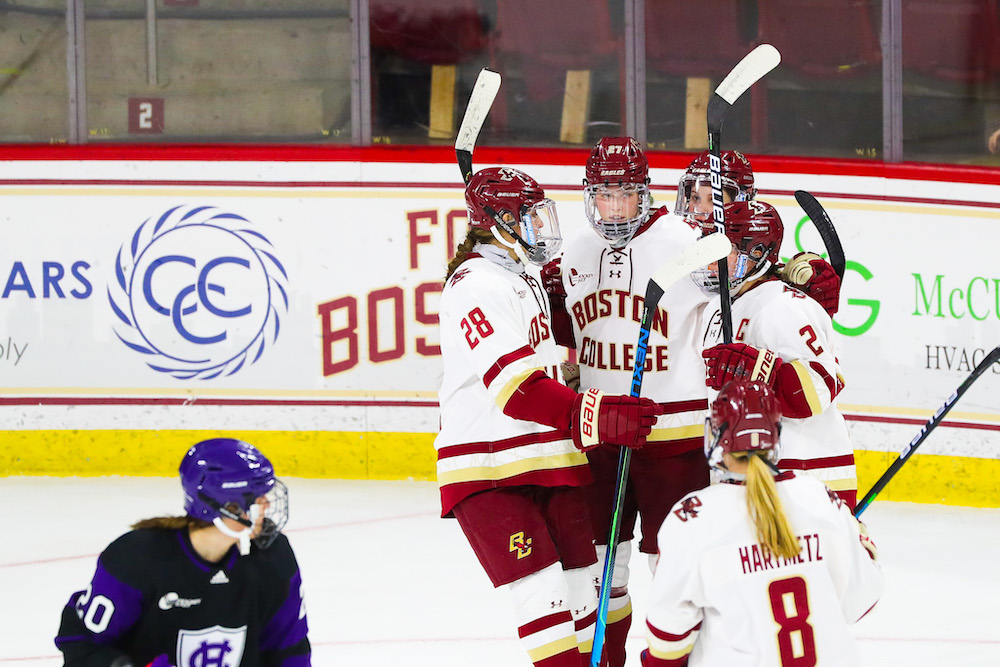 With 16:27 to play in the second quarter and the score tied at zero, Holy Cross forward Carly Beniek gathered the puck along Boston College’s goal line and dished out a pass to a waiting Allison Attea. Attea calmly controlled the puck with her skate and fired a wrist shot toward the Eagles’ net. The shot deflected off teammate Sofia Smithson but came right back to Attea, who smashed a first-time slap shot into the top right of the net.

The Eagles had dominated the afternoon up to that point, outshooting Holy Cross 26-11 through 25 minutes. Even so, the Eagles found themselves in a 1-0 hole in the opening minutes of the second period. Offensive inefficiency plagued BC all night. Despite outshooting the Crusaders 62-37 and 37-27 on shots on net, the Eagles struggled to gain control and only held the lead for just over four minutes of the game.

Still, a third-period surge, capped off by a Savannah Norcross goal with 4:36 to play, was ultimately enough to give the Eagles (8-3) the edge they needed, and BC eked out a 3-2 victory over the Crusaders (3-9).

With the win on Friday, the Eagles moved to 7-0 all time against Holy Cross. But, the contest was much closer than previous matchups between the two teams. BC outscored the Crusaders by a combined score of 19-4 in the teams’ three meetings last season.

“I thought they were definitely more physical than they have been in the past,” BC head coach Katie Crowley said in her postgame press conference. “They’re faster, they’re, you know, I think [in] the world of their coaching staff, I think they’re doing a great job over there.”

BC dominated the opening minutes of the contest, putting five shots on Holy Cross goaltender Jada Brenon in the first five minutes. Brenon, however, made several impressive saves to keep the game scoreless. The Crusaders evened the flow of play in the middle of the period, but BC turned the tide again in the final minutes of the first, mounting a furious onslaught on Brenon. With 1:05 to play, Kelly Browne slotted a pass across net to Norcross who had an easy chance on goal, but failed to gather the puck cleanly and had to settle for a weak attempt off Brenon.

“I think we need to be better at picking corners and finding those holes,” Crowley said.

After Attea put Holy Cross ahead early on in the second, the Eagles finally equalized with 1:17 to play in the period. Hannah Bilka carried the puck along the Crusaders’ goal line before sliding it in front of net to Willow Corson, who fired a backhanded shot over Brenon.

BC’s constant pressure finally resulted in its first lead of the night when, less than three minutes into the final period, Alexie Guay and Maegan Beres stared down a pair of Crusader defenders as they crossed the blue line. Beres carried the puck in front of Guay and, as Guay filled in to the side of her, laid the puck off to Guay who slotted it into the bottom of the net.

The goal was a direct result of stellar play by BC nettender Kelly Pickreign, who just moments earlier had come up with a huge block to halt a breakaway attempt from Darci Johal.

The Eagles’ lead was short lived however, as Millie Sirum poked the puck just inside the left post only 26 seconds after Guay’s goal to equalize the game at two apiece.

BC had a number of good opportunities on net in the middle of the third period but repeatedly struggled to control the puck in front of the net.

Then, with 4:42 to play in the game, Johal gave the Eagles a gift with an ill-advised pass back toward her own net. Olivia Finocchiaro cut off the pass and slid the puck left to Browne, who passed up a chance at net and dished a pass to a trailing Norcross for the winning goal.

“I think we’re all trying to make the right plays, the perfect plays, so at times we make a couple extra passes, and that’s good in one way because we don’t have a selfish team at all,” Norcross said about her goal in the postgame press conference.

savannah norcross willow corson kelly pickreign Olivia Finocchiaro hannah bilka
“It was a sacred place, and it was being desecrated”: BC Reacts to Mob at U.S. Capitol
Man Originally Arrested by BCPD Pleads Guilty to Possession of Child Pornography