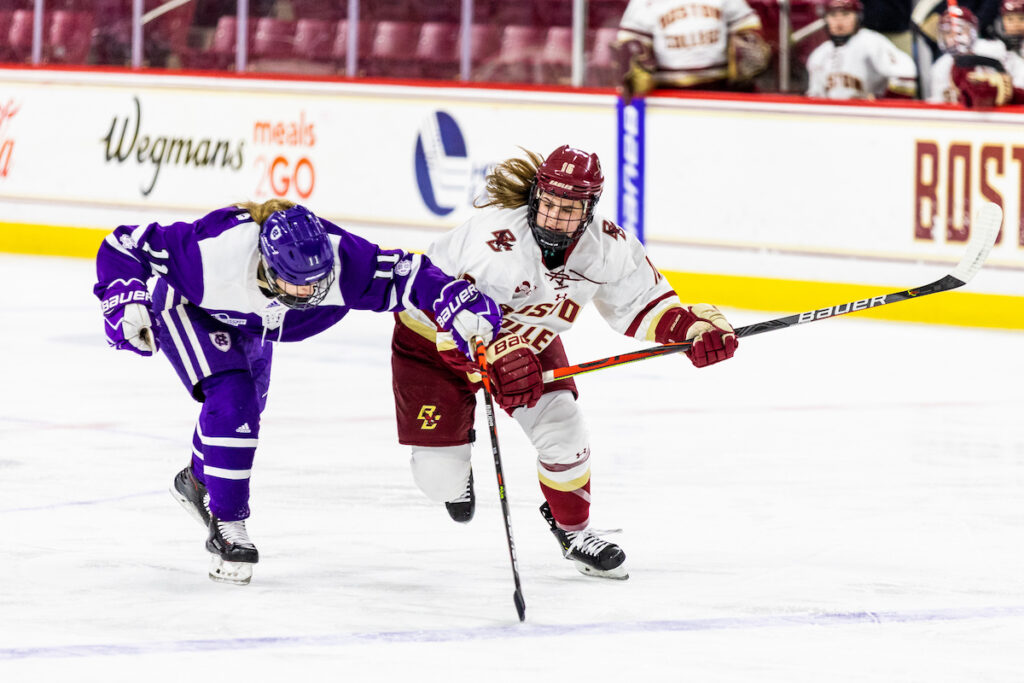 Still flying high from a late-game victory to Holy Cross only 24 hours prior, Boston College women’s hockey faced off against the Crusaders once again for the second game of their in-state home-and-home weekend.

After BC secured a hard-fought victory on Friday night, Holy Cross showed no signs of weakness entering the second match of the series. The Crusaders played as though they were hungry for revenge and eager to get shots off early and often, but BC struck hard to secure a 5-1 win and sweep the series. Despite lacking control of the puck at times, the No. 8 Eagles (9-3) stayed undefeated in their all-time record against Holy Cross (3-10).

The Crusaders have lost six out of their last seven matches before Saturday, and they carried a chip on their shoulders that thrust Saturday’s game into high speed from its start. Holy Cross quickly took control and fired four shots at BC netminder Abbey Levy in the first minute of the first period, but Levy held her ground.

Despite allowing 24 Crusader shots in the first period, BC quickly burst onto the stage to score the opening two goals in rapid succession. It only took the Eagles eight shots to take the lead, as Hannah Bilka’s fourth goal of the season midway through the first period followed Savannah Norcross’s goal just 30 seconds prior.

The Eagles came out of the gate firing an early barrage of shots to enter the second period. A soft behind-the-net toss by Kelly Browne set up Alexie Guay for a picture-perfect score in the top right corner less than two minutes into the middle frame.

Though Holy Cross had three power plays across the first two periods, BC held its composure and prevented scores on each drive, as Levy and the Eagles’ defense continuously came to the rescue. Multiple strong Crusader barrages on net came up empty as Levy’s fortitude prompted strong Eagle plays in transition on the opposite end of the ice.

Additionally impressive was Maddie Crowley-Cahill’s body block on a long slap shot from Vaia Graves, which diffused a potential score and eventually gave the puck back to BC.

BC began the third period up 3-0. But as the broadcast announcers definitively stated, a Holy Cross comeback was still in reach. This claim proved true, as a one-on-one fast break goal by Millie Sirum gave the Crusaders their first goal and narrowed the Eagles’ lead down to two after one defensive hiccup.

If anything, however, the goal made the Eagles up their guard, and they never looked back. BC regained control of the puck and limited its opponent’s possessions for the remainder of the game. Thanks to two power plays granted within six minutes, BC amassed 26 shots in the final period, including 12 unanswered shots through the first 10 minutes.

Browne found the net in a graceful shot under the crossbar to make the score 4-1, and Guay pocketed her second of the night in an upper left corner finish, putting the game well out of reach for Holy Cross.

Though the weekend sweep is undoubtedly satisfying, the Eagles will look to improve on their uneven play and lack of control on offense. A handful of games have come too close for comfort this season, and although Saturday was not one of them, BC has lots to build on.