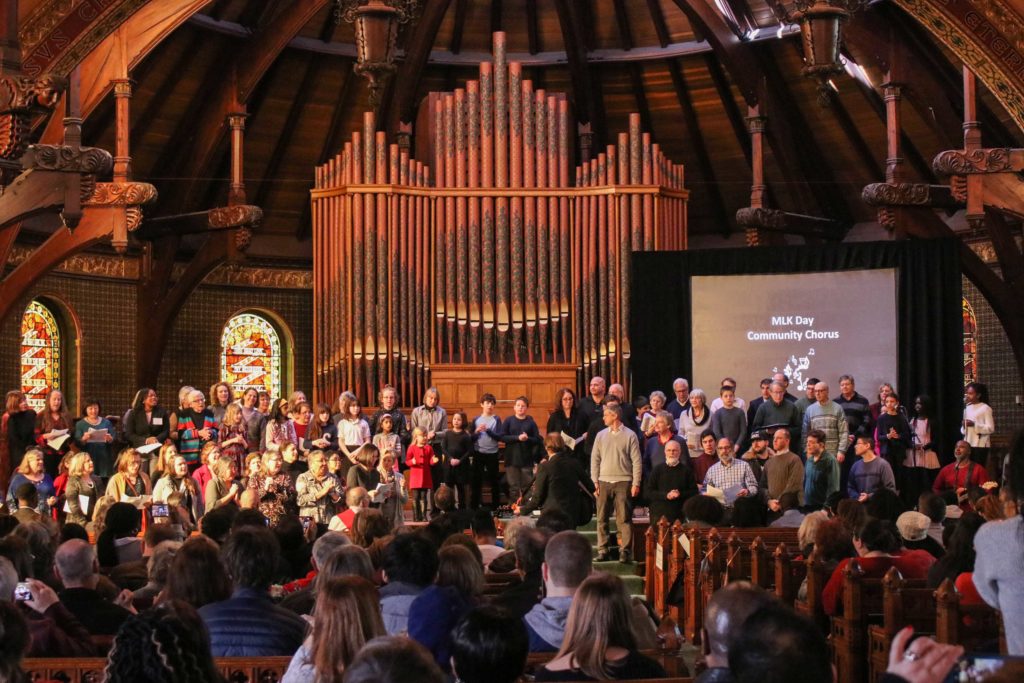 Newton civic and religious leaders, activists, and students spoke at a virtual celebration honoring the legacy of Martin Luther King Jr. on Monday. The event was hosted by the Harmony Foundation and centered around the theme of “Keep Moving Forward,” in light of the pandemic and widespread protests against the systemic racism facing Black Americans.

“Yes, we need to hope,” Newton Mayor Ruthanne Fuller said at the event. “But we also need to act. We need to keep moving forward.”

Newton students and officials spoke in prerecorded videos about actions that they have been taking to combat racism in the community. In Fuller’s speech, she gave examples to illustrate the need for concrete action to stop racism in Newton.

“The heartbreak of Black Newton moms afraid for their children’s safety because of the color of their skin. The anguish of our young students of color experiencing racism in the halls of our schools and desperately seeking more teachers, more police officers, and more role models who look like them,” Fuller said.

She also discussed instances of racism in Newton, including “Zoom bombers” disrupting classes at Newton’s schools with racist rants, a white supremacist and anti-Semitic banner found in the city, and broader forms of structural inequality.

“Now is the time to make sure our zoning and housing policies open Newton’s doors wider,” Fuller said.

David Fleishman, Superintendent of Newton Public Schools, spoke about steps the school district is taking to achieve equity throughout the city’s schools, including the hiring of a director for equity, diversity, and inclusion.

“If we do our jobs right, we will not only create a district that is more equitable and just for all, but help to create a generation of anti-racist activists that are prepared to tackle long-standing inequities,” Fleishman said.

Many students attending Newton elementary and high schools recorded statements expressing the need for action against racism in the city’s schools.

“We see when students of color bring up issues, sometimes they’re ignored or they’re not addressed in a proper way,” Maya Hernandez, a senior at Newton South High School, said.

The event also centered around the spiritual significance of King’s life and work. Rev. Devlin Scott from NewCity Church and Rabbi Allison Berry from Temple Shalom discussed the legacy of the voting rights marches King led in Selma, Ala., including support of the civil rights movement by religious leaders of different faiths.

“We want to be clear that we’re not equating the issues of Newton to the issues that were in Selma,” Scott said. “We’re not talking about our local challenges, although there are definitely some here in Newton. We are referring to the national piece of it and what our response is in a city like Newton.”

Berry and Scott also discussed the importance of engaging in constructive conversation, similar to their message in last year’s theme, “Know Your Neighbor.”

“The harder work in this social justice fight is this: it’s having hard conversations. It’s sitting down,” Scott said. “And so, we were answering the question[s], ‘What is our Selma? What is our response to the issue?’”

Richard Evans and Reverend Alicia Johnson from the Myrtle Baptist Church—where King once preached while studying at the Boston University School of Theology—also contributed by reflecting on the history of Newton celebrations of King’s life, beginning after his assassination in 1968.

Johnson, building on a motif that wove through many of the speakers’ remarks, emphasized that it is important to translate the celebration of King’s life into meaningful action.

“I think that when we pay, we honor, we give honor, we remember the past—we have an obligation to remember all of it, and then apply what came from those experiences to our current context,” Johnson said.

newton MLK
Canniff: The Continual Influence of the Me Too Movement
BC Partners with Student Veteran Enrollment Program