With 10 seconds left in overtime, Boston College men’s hockey showed no sense of urgency. Why should it? Pressure, even in the Eagles’ biggest game of the year—a Battle of Comm. Ave. for the ages—didn’t seem to exist. Drew Helleson danced coolly up the ice with the puck at his stick, and the clock ticked down, down, down.

Five seconds: a deke to his left.

Four seconds: a touch to his right.

Helleson stopped the overtime clock as it flashed 0.1 seconds, elevating No. 1 BC (11-2-1) over its principal rival from down the street, No. 15 BU (5-2). Cue bench-clearing celebrations. After heading into overtime knotted at 3-3, BC walked away with a 4-3 win that will go down in the history books.

“For Drew Helleson, an individual effort like that is just outstanding to see and watch a sophomore be able to do that,” BC head coach Jerry York said in his postgame press conference. “He’s just getting better and better.”

The calm, calculated nature of the 3-on-3 overtime was a stark contrast to the no-holds-barred, throwing-down-the-gauntlet-style regulation periods. If there is such thing as a point where hockey gets too physical, BC and BU seemed to be out to reach it during the 283rd iteration of the Battle of Comm. Ave. A scrum, skirmish, or a simple exchanging of words followed practically every whistle. In a rivalry as heated as this one, such is to be expected.

“[Physicality] adds to the game,” York said. “It’s a game of skill and quickness, but it’s also a physical game. I think that’s what makes hockey so exciting to watch.”

Jack McBain was the first to overcome the Terriers’ physicality and got on the board first for the Eagles with 7:53 to go in the first period. Helleson collected the puck off the boards and fired it on net, where it caught McBain’s stick and ricocheted in.

As has been the story for BC all season, the Eagles had more success off the power play than they did on. BC earned a power play midway through the first period, but McBain scored his goal nine seconds after the game returned to even strength. All in all, the Eagles held the man advantage four times and converted just one of those chances. BC’s power-play conversion percentage sits at a meager 8.7 percent, good for 47th in the country.

“Like I tell our guys, you throw percentages out of the window, and you get a goal in the game,” York said. “It’s all [about] staying right in the present.”

The Terriers’ first power play late in the first period was indicative of their lockdown defense which persisted all night. For practically all two minutes of the penalty, BC remained on the perimeter, hitting sharp passes and getting one or two shots off, but never making it within 10 yards of Abel.

After McBain’s opening goal, it took the Terriers until three minutes into the second period to get on the board. Jack DeBoer leveled the score at 1-1, and Markus Boguslavsky followed him three minutes later to give BU its first lead of the game.

Because BU held BC to the perimeter all night, the Eagles had just a handful of chances from point-blank range. The close-range shots the Eagles did manage, however, were capitalized on. Helleson’s goal was, of course, the highlight, but after the Terriers took the lead, BC had a great close-range chance on a power play.

Alex Newhook, who has been out of the lineup for the majority of the season, returned from injury and centered a pass to linemate Matt Boldy just in front of the crease. Boldy connected to tie the game back up at two with 8:04 left in the second period and one minute left on the power play. Colby Ambrosio followed it up with his sixth goal of the year six minutes later.

Newhook’s return, York said, “tempered the loss” of Logan Hutsko, who will miss significant time with an ankle sprain.

Power-play success went both ways, however, and just four minutes into the final frame, BU had a man advantage of its own when BC had too many men on the ice. BC goaltender Spencer Knight couldn’t see Alex Vlasic’s shot from the point through a screen from Luke Tuch, tying it up at 3-3.

BC killed off one final power play, and the Eagles headed to their fifth overtime of the year.

Almost one year ago Saturday, BC found itself in a remarkably similar situation in the opening round of the Beanpot. But what ended in heartbreak for the Eagles at TD Garden made for some of the sweetest revenge.

“We all need good rivals,” York said. “In basketball, you’ve got Duke [and] North Carolina, Army-Navy in football, Michigan-Michigan State in hockey, but we have BU.” 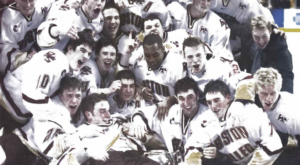