When I got home for Winter Break, I was coming down from the finals high. Hard. I fell into the kind of caffeine-crash-induced stupor that can only follow spending every day slumped in the same couch cushion crater, being blinded by the blue light of your computer, and working the interlibrary loan system like it’s your full-time job. My rehab of choice? Two blissful, post-finals weeks of hibernating, binge-watching everything on Hulu, and vehemently refusing to open my Boston College email. When I did finally reopen Gmail, I waded through—and mass-deleted—updates from The New York Times (which I subscribe to in pursuit of an aspirational version of myself who reads more news … ha) before landing on a slew of terror-inducing Handshake notifications. That’s right: it’s open season on internships.

I’m applying (and praying) along with the rest of you—but the more internships I apply to, the more I’m reminded of the persistent problem facing college students: socially-accepted exploitation. Or, as it is more commonly known: the unpaid internship.

Internships are incredibly valuable. They provide students the opportunity to gain experience before entering the workforce, find mentors in their intended fields, and sometimes earn credits toward their degrees. They also prove advantageous in the job search process, as having an internship on your resume increases your likelihood of securing an interview by 14 percent. Under the Fair Labor Standards Act (FLSA) of 1938, these experiences and advantages are understood as payment in and of themselves, making it legal for employers to engage students in labor without financial compensation.

Scholars and students alike, however, find that unpaid internships are often illegal and usually unethical. Experts posit that many unpaid internships violate the criteria of the FLSA—for example, having unpaid interns complete work that would otherwise be assigned to paid employees. While these violations mean unpaid interns may have grounds to sue for compensation, most are unaware of the illegality or are unwilling to report it, afraid of burning bridges just as they enter the job market. Uncompensated interns are further vulnerable to exploitation because, without employee status, laws like Title VII of the Civil Rights Act of 1964, meant to ensure a safe and equitable workplace, do not apply to them. Students who receive school credit for their internships are ostensibly protected under Title IX, but the lack of enforcement renders the protection nominal at best.

The consequences of these vulnerabilities are far-reaching, with roughly three-quarters of American college students participating in internships, half of which are unpaid.

To a certain extent, this is true of my own experience. I have enjoyed many of my internships and found them deeply valuable, but my first job as a camp counselor—with a salary well below minimum wage—paid better than any internship I’ve ever had, simply by virtue of paying at all. Every college student I know has their own version of this painful anecdote, finding part-time babysitting gigs and waitressing jobs more profitable than eight-hour days working for prestigious corporations. Some can even do me one better: they’ve paid companies to allow them to perform free labor. This marks a sinister new development in which businesses like Absolute Internship will charge hundreds—even thousands—of dollars for a guaranteed placement at an unpaid internship.

The movement toward expecting free labor from college students comes at a time when more of us desperately need the money than ever. The American Psychological Association reports that over one-third of college students in the United States “lack enough to eat and stable housing.”  This problem only grows as more low-income students pursue higher education. What’s more, today’s university attendees are burdened by unprecedented student debt. A recent U.S. News & World Report study revealed that 2019 college grads borrowed, on average, $30,062, representing a 26 percent increase in debt from graduates in 2009. Between pressing costs of living and looming loan payments, working for free often proves not just an unattractive option, but an impossible one.

I’ve been incredibly lucky. I can afford to take an unpaid internship. But I know every time that I accept an unpaid opportunity, I’m perpetuating a system that reinforces existing inequalities.

Unpaid internships help wealthier students get a foot in the door while those without significant economic resources turn to better paying—but less professionally advantageous—jobs, which reproduces barriers to upward economic mobility.  Because of the close relationship between wealth disparity and race, these inequalities fall along racial lines. The Survey of Consumer Finances reports that the average white family has eight times the wealth of the typical Black family and five times the wealth of the standard Hispanic family. This means that while the median white family in the United States has approximately $171,000 in net wealth, the median Black family has roughly $17,000. Students of color, therefore, are far less likely than their white peers to be able to afford to take an unpaid internship.

Between the pervasiveness and complexity of the problem and several lawsuits, which routinely end in settlements, it is clear that in order to achieve substantive change, legislation and the court system does not go far enough. The onus for change and the hopes of overworked college interns everywhere rests on the shoulders of employers.

I offer a plea: as companies voice commitments to diverse hiring practices, especially in the wake of the Black Lives Matter movement, their internship programs can and should be restructured to promote equity. The labor of college students is still labor—while we’re constructing a more equitable world, let’s build in the expectation that we compensate them accordingly.

labor economic inequality Unpaid Internships
Thumbs Up, Thumbs Down: Week of Feb. 8
Vaccine Rollout in Mass. Trails Behind the Rest of the Nation 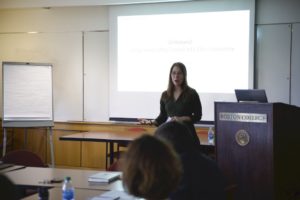