‘Judas and the Black Messiah’ Redefines the Black Panthers

The film focuses on Black Panther Party Chairman Fred Hampton (Daniel Kaluuya), who led the party’s Illinois chapter. Through this leadership, the Panthers fed hungry children for free and established medical clinics. His love for the people around him led him to create the Rainbow Coalition, which united communities experiencing hardship and discrimination in Chicago.

The film delves into a greater internal struggle pertaining to his loyalties to the Panthers through William O’Neal (Lakeith Stanfield), who entered the party under coercion from the FBI and acted as an informant for agent Roy Mitchell (Jesse Plemons). O’Neal’s clandestine meetings with Mitchell explore why apolitical and centrist policies simply cannot exist if America hopes to become truly inclusive.

In a virtual roundtable with Warner Bros., the Judas and the Black Messiah cast answered questions from journalists at universities across the country, including Boston College. The cast’s stellar acting abilities are bolstered by their belief in Hampton’s message. By participating in the film project, the actors upheld director Shaka King’s goal to uncover the realities of Hampton’s efforts to unify, rather than to destroy, Chicago.

“It’s the truth,” Kaluuya said. “How people take it, that’s just a reflection on them and how they feel about the world.”

While many can name Malcolm X or Martin Luther King Jr., few Americans know who Fred Hampton was and what he stood for. Judas and the Black Messiah teaches its audience about the lesser known historical figures. Dominique Fishback, who portrays Hampton’s partner Deborah Johnson, said uplifting Hampton’s legacy was an important mission.

“We’ve always had heroes, and we don’t get to know that, you know?” Fishback said. “There’s always some kind of white savior in these stories. By learning about Hampton, and the fact that a lot of us have never heard about him—who else have we never heard of?”

Stanfield echoed Fishback’s sentiments on refusing to accept how history is taught through the lens of white Americans.

“How much time do they spend in education talking about these really important historical figures?” Stanfield said. “Not very much. So you’ve got to do your own individual research to kind of understand it.”

Kaluuya said he sees Hampton as “the mouthpiece of this larger body” of revolutionaries.

The cast members said they benefited from having Hampton’s partner Deborah Johnson—who now goes by the name Akua Njeri—and her son Fred Hampton Jr. as cultural consultants during filming. Fishback, in particular, said she had the opportunity to confirm that her performance was historically accurate.

“The first time [Mama Akua] came [to set], she called me down, and she said, ‘You did that scene. That was Deborah Johnson up there,’” Fishback said. “She saw herself in me.”

In conjunction with historical accuracy, the cast knew the importance of rendering complex, real human beings. Stanfield, for example, said he believes his character O’Neal “might be more like the people that’s watching [the film] than they think.”

Because Stanfield portrayed O’Neal as a nuanced person rather than a flat antagonist, he was able to transform every one of his scenes into an emotional work of art, making O’Neal dance on the line separating treachery from true loyalty.

Kaluuya takes creative liberty in bringing Hampton’s power and charisma to life. In the months before filming, Kaluuya said he listened to Hampton’s speeches constantly, sang gospel songs, and even took up smoking to ultimately create Hampton’s voice and to adopt his speaking mannerisms. Kaluuya’s ability to masterfully embody such a righteous and selfless leader augments his immense talent as an actor.

Beyond the cast’s spot-on, stunning performances, the film employs skillful lighting techniques and camera movement to transport viewers into the constantly changing world of Chicago in the 1960s. Depending on the setting—from an empty alleyway at night to a crowded pool table inside a dimly lit bar—King’s sophisticated stylistic choices enable viewers to feel the anxious tension that must have rang throughout the city.

But King isn’t heavy-handed. Judas and the Black Messiah uses music as a sophisticated motif rather than a simple tactic to shift a scene’s mood. Two seemingly disconnected scenes can be brought together by the same panicked, discordant musical note, ultimately creating a greater anxiety within the film about constant surveillance, the inability to escape low socioeconomic status, and the overall capitalistic system in which the characters are trapped.

Even within this swirl of action and anxiety, King and his cast capture poignant moments of sweet love, happiness, and loyalty within the Black Panther Party—further disputing the notions of dangerous radicalism with which the Black Panther Party is often associated. The bond between the Panthers and Fred Hampton’s ability to truly live for the people made it possible to gradually change the cultural landscape and power imbalances in Chicago. In short, Hampton actualized the start of a battle the Black Lives Matter movement is still fighting.

When asked about what the movie could mean for young activists today, Kaluuya said the answer isn’t to simply wait for a visionary like Fred Hampton. 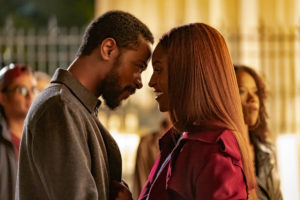