Student Assembly (SA) representatives of the Undergraduate Government of Boston College voted to proceed with the impeachment trial of Christian Guma, UGBC President and CSOM ’21, in a meeting on Tuesday night.

The article of impeachment charges Guma with violating Article III, Section 3.H.I of the UGBC Constitution—which states that the Community Relations Committee has jurisdiction over all formal statements written on behalf of UGBC and the SA—by his posting of an unattributed statement regarding the recent vandalism in Xavier Hall on the UGBC Instagram account without approval from the committee.

Fifteen representatives voted for the certification of the article, two—James Freirich, CSOM ’21, and Samuel O’Connor, MCAS ’21—voted against it, and 10 abstained.

The statement received “immense criticism” and incited “confusion” among students prior to being deleted, according to the article.

“[Guma’s Instagram post] was captioned with ‘Our statement regarding the acts of vandalism on the MLE floor this weekend,’ which sends the message to the student body that this statement was made on behalf of all of UGBC,” said Mitzy Monterroso-Bautista, who co-sponsored the article of impeachment with Leonardo Escobar, both SA representatives and MCAS ’22.

SA members debated the article, which calls for releasing Guma from his position and declaring him ineligible to serve in any official capacity within UGBC.

“The statement was racially insensitive and threatened the reputation of UGBC as an organization that values the voices of all students,” Monterroso-Bautista said.

Before ultimately voting against the certification of the article, O’Connor asked why the content of the post was brought up.

“It doesn’t really seem like it is about the actual, supposed violation of the Constitution,” O’Connor said. “I think that [the content of the post] seems pretty removed from the article itself and that this is kind of just like a veil to impeach Christian because presumably we didn’t like the statement.”

Alexandra Katz, Lynch ’23, said that the content of the statement was not the issue in question.

“That statement could have said anything under the sun, and it would still be unconstitutional because it was passed up on behalf of an organization without oversight from one of the branches of that organization,” she said. “So really, the content of the statement itself is very much beside the point here.”

Representatives also discussed the specific wording of Article VIII of the UGBC Constitution, which pertains to impeachment procedures, questioning whether it would still be an impeachable offense if Guma had been unaware that his action was a violation of the constitution.

Monterroso-Bautista and Escobar said that Guma’s statement damaged the relationship between the student body and their representatives.

“The statement undermined all of the work that several AHANA+ representatives already were putting into making the statement, recognizing concerns of AHANA+ students and planning to impose tangible steps forward as an organization to address issues of race on campus,” Monterroso-Bautista said.

Dennis Wieboldt, UGBC parliamentarian and MCAS ’22, said that such matters could be further discussed and determined during the trial, should the representatives vote to move forward with one. The purpose of the preliminary vote was merely to determine whether there was enough evidence against Guma to certify the article of impeachment.

In order to move forward with the impeachment trial, the SA needed a simple majority of the representatives present at the meeting to vote for the certification of the article. Wieboldt clarified that SA representatives did have the ability to abstain on this vote.

After the conclusion of the impeachment trial, though, all SA members must vote and cannot abstain. A supermajority of the entire SA must vote to impeach and remove Guma in order to formalize the impeachment, according to Wieboldt.

Both Guma and those charging him with impeachment must submit pre-trial briefs, evidence, and names of witnesses to Wieboldt by Sunday at 8 a.m. to ensure that they comply with the SA’s rules of evidence, Wieboldt told The Heights.

Wieboldt will distribute the pre-trial briefs to the SA on Sunday night, he said. The SA will not have access to the evidence or the names of witnesses until the trial begins.

The trial will begin at 8 p.m. on Feb. 16 and will be publicly accessible through a Zoom webinar, but will likely carry over into the following meeting on Feb. 23, Wieboldt said. 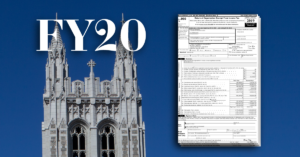