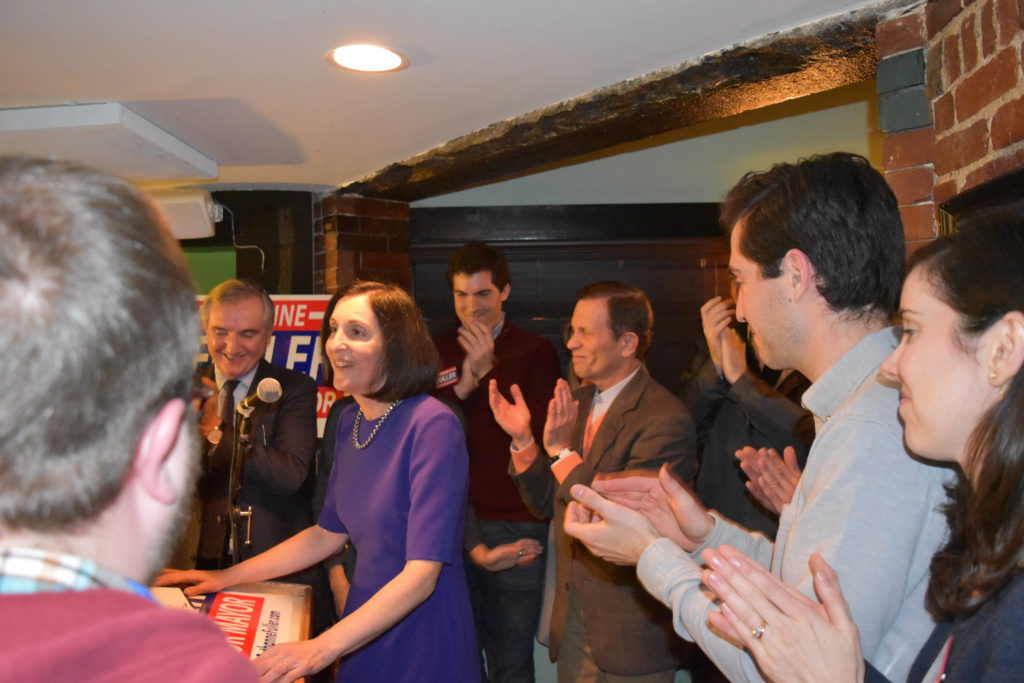 Reflecting on the resilience of the Newton community over the past year, Newton Mayor Ruthanne Fuller delivered her fourth State of the City Address, in which she provided an update on the city and community’s response to the COVID-19 pandemic and offered her plan for the city’s gradual recovery in the coming year.

“I consciously tried to lead with a steady hand and a compassionate heart, making health decisions based on facts and science, communicating frequently, advocating for better state and federal support and ensuring our decisions reflect our core values of respect, diversity, and acceptance,” Fuller said.

Despite the many challenges of this year, Fuller has a positive outlook for the future and the lessons the community collectively learned from the pandemic, she said in her address, which was held on Wednesday night over Zoom, in contrast to its typical format in the crowded City Council chamber. She credited the Newton community for its generosity, citing the donations of time and resources by neighbors since March.

Fuller’s address also centered around the resources the city provided to serve and assist the community. Housing and Community Development Director Amanda Berman helped to fund $3.6 million in emergency housing and small business assistance, Fuller said. Through the “Grab and Go” program, the City of Newton and Newton Public Schools donated 358,042 meals to members of the community.

Looking toward the future, Fuller will remain dedicated to helping the community survive and prosper for the duration of the pandemic, she said. She said she would prioritize keeping older residents safe and vaccine distribution.

“I am all in on moving us forward and helping us recover, rebound, and rebuild,” Fuller said. “At City Hall I am laser focused on getting our residents access to vaccines, whether we are 85, 65 or 25.”

Fuller said that she will continue to push the state to set up more vaccination sites in Newton, including at doctors’ offices, pharmacies, and large nearby sites. For those who are homebound, without internet access, or without family to assist them in making an appointment, Fuller recommended calling City Hall for assistance. Senior citizens in the community without internet access or transportation can also call the Newton Senior Center for assistance with making a COVID-19 vaccination appointment.

While residents wait to get the COVID-19 vaccine, Fuller encouraged Newtonians to continue to social distance, wear masks, and stay home when not feeling well.

Reopening schools is another issue Fuller will prioritize in the coming months, she said.

“I will do everything I can from City Hall to not just open fully in September, but also to help students this spring who want to be in person more.”

With ventilation upgrades to school buildings, weekly surveillance testing beginning in the coming weeks, and vaccinations of teachers and staff, Fuller said that more in-person learning can be accomplished safely.

Fuller also emphasized creating a positive atmosphere for the daily lives of Newtonians. Fuller said small businesses are a fundamental part of the community atmosphere, and offered financial recovery grants to help them.

The city provided $300,000 recovery grants to brick and mortar businesses, and Fuller said that the city will soon provide another $300,000. In September, the city took steps to expand outdoor seating at no cost to restaurants by installing painted barriers, placing picnic tables in parking lots, expanding sidewalk seating, and expediting alcohol permits. Fuller said that the city will build on these efforts and continue to partner with small businesses.

Fuller said that the city should support the City Council in updates to zoning. She said that the city must have a mix of housing options, allowing the next generation to live in Newton and older residents have a place to downsize.

“We are rightfully proud that 489 deed restricted, permanently affordable units have been permitted since my inauguration,” Fuller said. “We will keep going.”

Also central to the Newton community is the environment, Fuller said. She said that Newton continues to be the leader in Massachusetts with the city’s electricity aggregation program, Newton Power Choice. Fuller said that all residents have access to renewable energy.

Working with the selection committee, Fuller will help find the next Newton Police Chief. The next police chief will lead the department in safe and effective policing, Fuller said.

Fuller anticipates that some challenges of the upcoming year will include a tight budget as well as recent instances of hate, including the display of hateful language such as white supremacy and anti-Semitism from banners on overpasses. Fuller made it clear that the city will not tolerate racism and will strive for equity.

“I am actively committed to combating racism and hate. I ask for your help, as we strive for deeper, more systemic racial justice and equity,” Fuller said.

Going forward, it is the humanity, hope, and strength of Newton citizens that guides the city throughout the next year, Fuller said.

“We learned to run a city remotely, and created new ways to deliver city services,” Fuller said. “In the process we built new skills, and I know this muscle memory will serve us well.”