Three Boston College sports have gone into pause due to COVID-19 protocols, Senior Associate Athletics Director for Communications Jason Baum confirmed in an email to The Heights on Tuesday. The pause comes amid a rise in COVID-19 cases on BC’s campus in recent weeks.

“Out of an abundance of caution, we have temporarily paused all team activities with the volleyball, women’s soccer and men’s basketball programs,” Baum said. “The student-athletes who tested positive are in isolation in accordance with University COVID-19 protocols.”

Volleyball has played just one game so far this season and women’s soccer was slated to begin this week. Baum did not specify how long the pause will last.

The pause follows in-state rivals Boston University and UMass Amherst, both of which have also faced athletics pauses this season. UMass entered a department-wide 14-day shutdown period on Feb. 7, and BU underwent a similar but shorter pause in late-January.

Men’s basketball has regularly struggled with postponements this season. The Eagles had a five-game stretch of postponements between late-January and early-February and had played just three games before another positive test within the program forced it back into pause on Tuesday. BC Athletics announced on Monday that star guard Wynston Tabbs will miss the remainder of the season due to a violation of BC COVID-19 policies.

This stoppage is not the first time that BC Athletics has imposed a pause on some of its programs this year. Practices and workouts for many out-of-season teams were temporarily suspended in mid-September after a COVID-19 outbreak within BC swimming and diving. Tuesday’s pause is much different, however, as it applies to a number of teams that are currently in season.

The pause adds to what has already been a tumultuous week for BC Athletics. Men’s basketball coach Jim Christian was fired on Monday after six and a half years in charge. In addition to the news about Tabbs missing the remainder of the season, BC hockey’s Logan Hutsko announced his early departure from BC late last week. 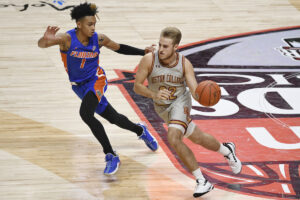 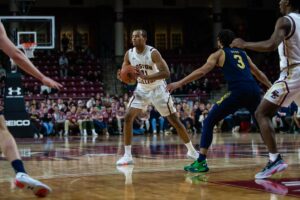